Experts say this type of technology will become common in homes. 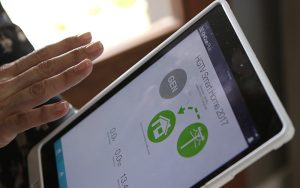 The network, which airs programs on home design and remodeling, gave Cronkite News a sneak peak at the house, which it’s giving away as part of a sweepstakes contest. The network valued the prize package, which includes furnishings, a Mercedes-Benz and $100,000, at $1.5 million.

Beyond the 3,300-square-foot home’s “colorful canyon-style” aesthetics, the design team focused on tech gadgets to make life easier, according to a news release.

The home has a smart key lock security system accessible only on the inside of the house. Homeowners can control the locks by using a smartphone app, said Carley Knobloch, HGTV’s technology consultant for the Scottsdale home.

Home Smart Real Estate housing expert John Schloz said taking your home down the smart road is a lot more affordable than it used to be. “You can really take any home and spend anywhere from $1,000 to $2,000 and make it very smart and have it do a lot of things,” Schloz said. “Smart isn’t as expensive as it used to be.”

The home has three bedrooms, three-and-a-half bathrooms, a kitchen and wine bar, living room, dining room and laundry room suite equipped with controllable elements. Owners can signal window shades to open or close, turn off and on lights or adjust the brightness and change the air temperature from a smartphone. 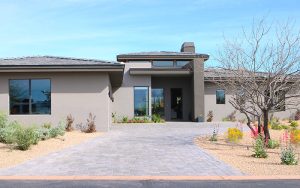 Cable network HGTV has decked out a Scottsdale home with new technology as part of a sweepstakes contest. (Photo by Jessica Clark/Cronkite News)

The bathrooms also have controls that allow users to control the temperature of the toilet seat, flush and close the toilet, play music and change the color of the floor lights.

Ron Feinbaum, HGTV’s general manager of home promotions, called Scottsdale an “impeccable choice” for its latest home in a statement released by the network.

“It’s such a vibrant destination for those seeking year-around family fun, whether on vacation or as a place to call home,” the statement said.