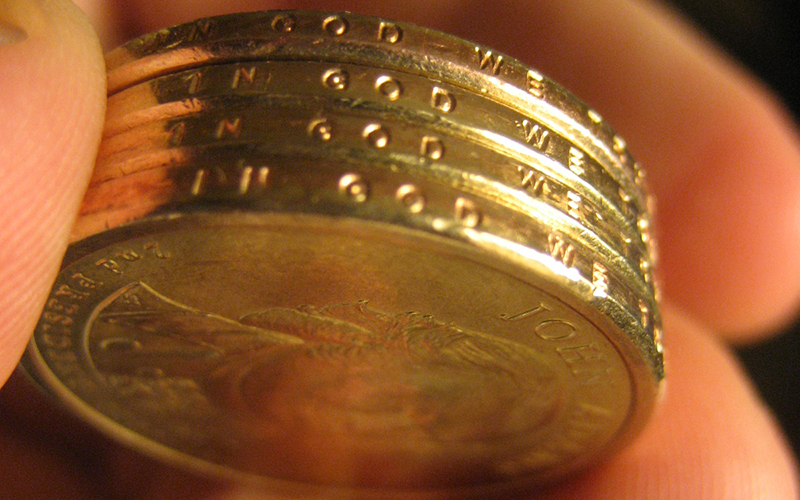 Shifting from paper dollars to a more durable dollar coin could save the U.S. billions over 30 years, studies show, but there has been little suport in Washington for bills that would make that change, despite the savings. (Photo by cometstarmoon/Creative Commons)

WASHINGTON – Even small change can make a difference in the fight against government spending.

That’s why Republican Sens. John McCain of Arizona and Mike Enzi of Wyoming reintroduced legislation Wednesday to phase out the dollar bill and replace it with a dollar coin, part of a package of currency reforms that could save at least $16 billion over 30 years.

The Currency Optimization, Innovation, and National Savings – or COINS – Act, would also suspend production of pennies and change the composition of nickels to cut costs.

“With our country facing $20 trillion in debt, Congress must act to protect the American taxpayer,” McCain said in a prepared statement. “By reforming and modernizing America’s outdated currency system, this commonsense bill would bring about billions in savings without raising taxes.”

Commonsense, but not an easy sell in Washington. The bill was first proposed by then-Rep. Jim Kolbe of Arizona in 1991. Similar bills have been introduced regularly since then – this is McCain’s third attempt.

The legislation cites 10 Government Accountability Office reports from the last two decades, all of which found benefits from switching dollar bills to dollar coins. The most recent GAO report, coupled with a March report by two former Senate economists, is where the estimate of $16 billion in savings comes from, an estimate that advocates say is conservative.

The biggest savings would come from the longevity of coins compared to paper. The March report, prepared for the Dollar Coin Alliance, says that bills last on average around five years, while coins can extend past 30.

“Coins last a lot longer than paper,” said Aaron Klein, former Democratic chief economist for the Senate Banking Committee. “One coin costs around 18 cents. Reprinting that dollar note 7 times over 31 years costs 62 cents. You sell a dollar in 30 years for one dollar, but the cost of producing it will have gone up.”

The report and the bill also point out that the penny and nickel both cost more to produce than they’re worth. So the bill proposes suspending production of the penny for 10 years and changing the composition of the nickel to 80 percent copper, 20 percent nickel.

Klein estimates that changing nickel composition would save over a half-billion dollars in 30 years, while suspending production of pennies – two-thirds of which sit out of circulation and in jars, he said – could save $1 billion in 10 years.

Other countries have phased out their version of the penny and had to round prices as a result, but the McCain-Enzi bill would not go that far. The penny would remain in circulation, there would just be a pause in minting them.

“This does not mean there is rounding – there are billions of pennies we could go swimming in, like Scrooge McDuck,” Klein said.

Currency reform enjoys bipartisan support, according to a survey by Hart Research Associates and Public Opinion Strategies done on behalf of the Dollar Coin Alliance. The late-January survey of 1,001 voters showed that 74 percent of Republicans and 68 percent of Democrats would favor replacing the dollar bill with a dollar coin, and 77 percent would support suspending penny production.

So why is the bill not yet law, 26 years after Kolbe first introduced it?

“I think there’s a number of reasons,” Kolbe said. “There’s the inertia factor. It’s hard to get people to change their currency. There are special interests involved – those who manufacture the paper that is used in the currency, those that manufacture the metal slugs used for pennies – that resist this kind of change.”

But Kolbe is optimistic that now is the time for this legislation to go through.

“The polls show clearly that when Americans are confronted with the facts about the savings that are there, then they change their mind,” he said Wednesday. “No congressperson should hesitate to go back to their constituency and say, ‘I just voted to save us $16 billion, and it’s not going to be an inconvenience to anybody, it will be simple.'”