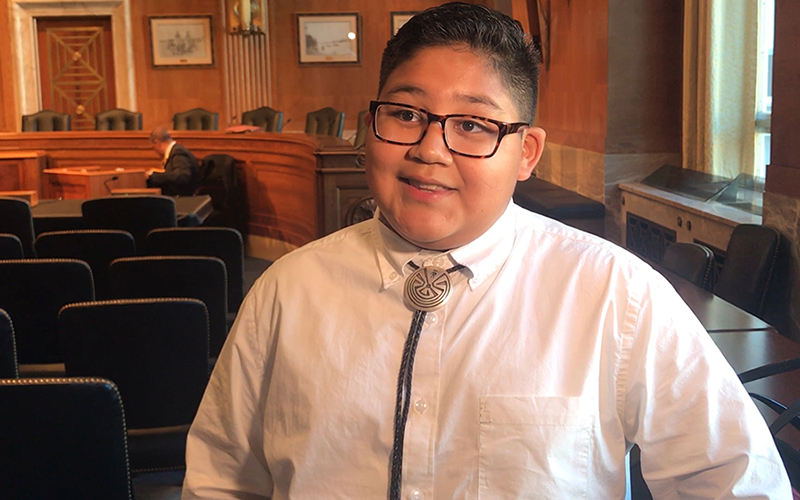 Alton Villegas, 11, a member of the Salt River Pima-Maricopa Indian Community, which is plagued by diabetes. He charmed a Senate committee with his own story at a hearing on saving tribal diabetes funding. (Photo by Marisela Ramirez/Cronkite News)

Alton is a member of the Salt River Pima-Maricopa Indian Community where nearly 10 percent of tribal members have Type 2 diabetes, including members of his family.

That’s what brought Alton to Washington Wednesday, where he was the youngest of six witnesses urging the Senate Indian Affairs Committee to reauthorize the Special Diabetes Program for Indians.

The program grants $150 million a year to about 300 programs that push diabetes prevention to tribes in 35 states, said Rear Adm. Chris Buchanan, acting director of the Indian Health Service. The program will end after September if it is not reauthorized.

Since the program began in 1997, tribal obesity rates have remained stubbornly high, said Sen. John Hoeven, R-North Dakota. He said Native Americans still have a greater chance of being diagnosed with Type 2 diabetes than any other group in America, and that diabetes is their fifth-leading cause of death.

But Hoeven, the committee chairman, also acknowledged at the hearing that the grants have helped lower diabetes “and its complications, such as limb amputations, heart disease and kidney failure. But there’s still more work to be done.”

The Salt River Pima-Maricopa Indian Community, like other grantees, uses its grant to educate families on the benefits of exercise and balanced diets, offering free family-oriented exercise classes and programs that promote healthy lifestyles.

After a 6-year-old on the reservation was diagnosed with Type 2 diabetes about three years ago, the tribal council began more screening at schools and found 52 percent of students were above the 95th percentile for weight.

When a screening showed that Alton was at risk for Type 2 diabetes, his family learned that he qualified for the Youth Wellness Camp in Prescott. Grant money from the federal program lets the tribe send at-risk youth to the camp.

The healthy eating and daily exercise at camp helped Alton lose almost 16 pounds. His mother, Felicia Jimerson, said that Alton’s new outlook on eating healthy and exercising is rubbing off on her three other kids.

Alton said that he tries to help his family and friends make healthier decisions, but they do not always listen.

“I tell them all the time … but not a lot of people care, ’cause that means they have to give up Hot Cheetos,” said Alton, who has seen his friends buy “at least four bags” of the snack a day from the ice cream man.

“We must destroy the ice cream man!” Alton told the committee, to laughter.

Rachel Seepie, another member of the Salt River Pima-Maricopa Indian Community who testified Wednesday, credits some of her success against her Type 2 diabetes to educational programs funded by the grant program.

After initially managing her condition with medication, she decided to turn instead to exercise and eating well. That has helped her lose weight, lower her blood sugar, decrease her average heart rate and complete two Iron Man triathlons, Seepie said.

Now, she is a senior fitness specialist with the Diabetes Service Program and teaches group exercise classes on the reservation.

“My vision is that the Salt River Pima-Maricopa Indian Community and our members will learn how to become healthier, and they will have long full lives without Type 2 diabetes,” Seepie told the committee.

Jimerson said after the hearing that can only happen if the gran program is reauthorized.

“I think if they can continue that funding, it’s definitely going to make a change,” she said. “If that funding goes away, we’re in huge trouble.”