Bricker, 29, was there to accept the HOPE (Head Start, Opportunity, Positive Future and Education) award at Florence Crittenton of Arizona’s 15th annual Teaming Up For Girls Luncheon.

Bricker’s unconventional life journey led her to the Marriott ballroom.

Born without legs, she was put up for adoption when she was only 3 months old. She doesn’t dwell on her past, though. With an upbeat attitude, she told the crowd about her life as an accomplished aerialist, acrobat and author.

Bricker was honored by the nonprofit Florence Crittenton, which put on the luncheon to commemorate its 120 years of service to at-risk girls and young women and its mission to “give every girl whose life we touch safety, hope and opportunity.”

“One of the most important things is realizing that you have value and realizing that you have significance in what you are passionate about,” Bricker said to the crowd. “It’s just what you are naturally good at and those things that they have within them, they are of equal value and they have it in them to change someone’s life and it’s beautiful. I feel like they can tap into that.”

Last year, the event featured kidnapping survivor and author Jaycee Lee Dugard as the keynote speaker, and Julie Johnston, a member of the 2015 women’s FIFA World Cup championship team and a 2016 Olympian, was the HOPE recipient.

Bricker gave a brief speech at this year’s luncheon after guests watched a short video describing her journey.

“I was really pleasantly surprised and blown away and really respect what everyone is doing here,” Bricker said. “It’s really important. It’s changing lives which is changing the world, so it’s pretty beautiful.”

Bricker, who also was born with her heart located on the right side of her chest, has performed on the Britney Spears World Tour and has been the headliner at The Palazzo Las Vegas hotel, the Lincoln Center for the Performing Arts in New York and the Shangri-La Hotel in Dubai. 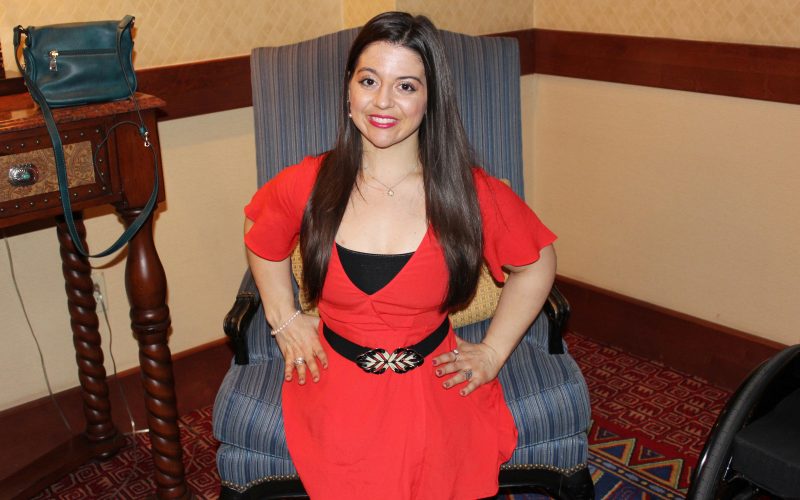 “In the beginning of my career nobody wanted to hire me,” Bricker said. “There had never ever been a person without legs to be an acrobat or aerialist.”

Her gymnastics accolades grew when she was 10 years old and took part in the Junior Olympics. At 11, she was the Illinois tumbling champion.

“I just always remember loving it,” Bricker said. “I don’t remember a time when I wasn’t drawn to the outdoors, sports and gymnastics, and so I think I came out an athlete and I grew and grew and grew.”

Her love for the sport was influenced by Olympic gold medalist, Dominique Moceanu. Moceanu was the youngest of the “Magnificent Seven” United States gymnasts in the 1996 Summer Olympics in Atlanta.

Bricker, who was only 9 years old at the time, idolized Moceanu when she saw her on TV during the Olympics. What she didn’t know was that she was actually watching and idolizing her biological sister.

Bricker’s adopted parents had recognized Moceanu’s parents on TV during the Olympics and knew those were Bricker’s biological parents, but decided not to tell Bricker until the time was right. Bricker was 16 when she learned the truth.

In 2007, Bricker wrote a letter to Moceanu explaining how she was her biological sister. Moceanu, who was in college at the time, called Bricker about a month later. Bricker and Moceanu, as well as their youngest sister, Christina, met for the first time in May 2008 in Cleveland.

Since then, the sisters have kept in touch and continued to meet up despite their busy schedules. The last time all three sisters were together was in June for Christina’s son’s baptism in Houston.

“We are completely spread across the U.S., but we meet up as much as we can,” Bricker said. “Since I travel so much with all the differnet things that I do, if I am anywhere close or in their cities I stay with them … if they are ever out in L.A., they stay with me.”

Bricker said besides Moceanu, her favorite gymnasts are Shawn Johnson and Simone Biles, who coincidentally was the featured guest at the Florence Crittenton event.

Biles, a four-time Olympic gold medalist, participated in a question-and-answer session at the luncheon and a VIP meet-and-greet prior to the event. Biles was adopted by her grandparents at a young age and shared her story of adoption, growing up, her gymnastics career and plans for the future.

Biles’ immediate plans include being on “Dancing with the Stars” and taking the year off from gymnastics, although she plans tol train for the 2020 Olympics.

“I didn’t get to interact much with her (Biles), but I went over and congratulated her,” Bricker said. “She knows my sister as well, and so I just wanted to congratulate her. And she is just the sweetest thing and so adorable, and I was really happy to be at the same event as her. I thought it was great.”