Tabitha Holmes, who runs a clothing label, House of Holmes, said the nonprofit apparel foundation creates a community for designers and is slowly helping to bring recognition to Arizona fashion.

“It’s nice to bring more fashion to this desert,” Holmes said. “It’s a little bit of a different market and a different vibe, but it’s growing. That’s the cool part. I love that I’m here when it’s starting to turn into something.”

Designers can conceive, create and complete a design for customers without leaving the warehouse, according to the founders.

A core group of five designers work at the warehouse, filling different niches. Some create children’s clothing, others make leather goods, and one even designs matching clothes for children and pets. 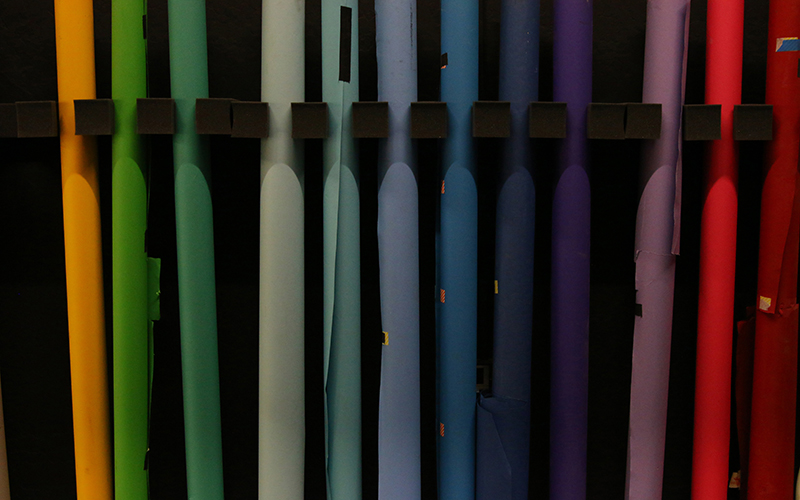 The Arizona Apparel Foundation, labeled by its founders as a “fashion incubator,” has materials designers need such as a photo studio and different fabric. (Photo by Kaylin Burke/Cronkite News)

Holmes, who started at the apparel foundation when it opened in October, is a fashion veteran who graduated 17 years ago from the Fashion Institute of Design and Merchandising in Los Angeles. She said she has worked at Guess, Lucky Brand Jeans, Quiksilver/Roxy. She left when she started a family but fashion drew her back in.

“Nobody knew there were so many designers here,” Holmes said. “Even at Phoenix Fashion Week, they pull designers from other areas of the country. But there’s still a core group of us here that are trying to keep the industry here.”

Calvin Lieberman, founder of leather-goods company Max Mizur, said just one month at the apparel foundation has changed his career.

“It’s night and day,” Lieberman said. “Apart from the obvious things like resources and having people around you, fashion, more so than any industry, is an ecosystem. The simplest way I could put it is that my days went from being largely administrative to being very creative and being very immersed in an immensely beneficial environment.”

Designer Jessica Kelley, who works with co-founder Angela Johnson, plans to get an office in the building. Founder of Haus of Miw, a clothing company that offers matching baby and pet clothes, Kelley said the warehouse would be a valuable resource to starting her company. 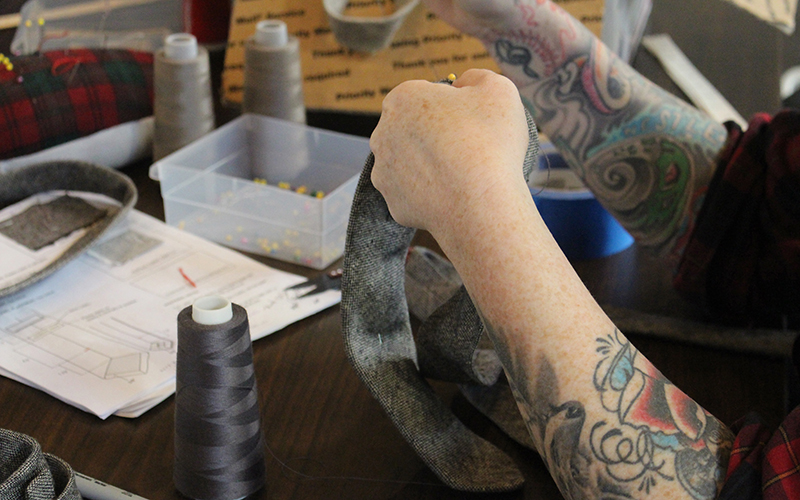 A worker sews a tie at Arizona Apparel Foundation, a “fashion incubator” for local designers. (Photo by Ethan Millman/Cronkite News)

“Having this one-off manufacturing is huge,” Kelley said. “Also, as a small designer, I can’t afford to order 100 plus yards of fabric. But now I can come here and source my fabrics and have things made specifically. I can order two yards of fabric which would make me 10 garments, and that’s huge for me.”

Kelley said the small community of designers there should grow and eventually should help grow Arizona’s fashion industry.

“We’re all pretty close and there’s not really a ton of competition here,” Kelley said. “So, we kind of rely on each other to guide and to help promote. I think being a community is huge, especially being as small as we are. We are all working together to help build our fashion scene.”

The designers offer clothes on their websites and through Etsy to take their products directly to customers.

Holmes said online shopping is a more convenient and efficient way to shop.

“All the brick and mortar companies that I was selling to are struggling,” Holmes said. “That’s another reason I stepped out of wholesale. Why, when people can just go online and buy it direct? With Instagram, Facebook and Shopify, I’m everywhere. Instead of doing the grind and trying to badger people to buy stuff for my store, they can get my product right from online.” 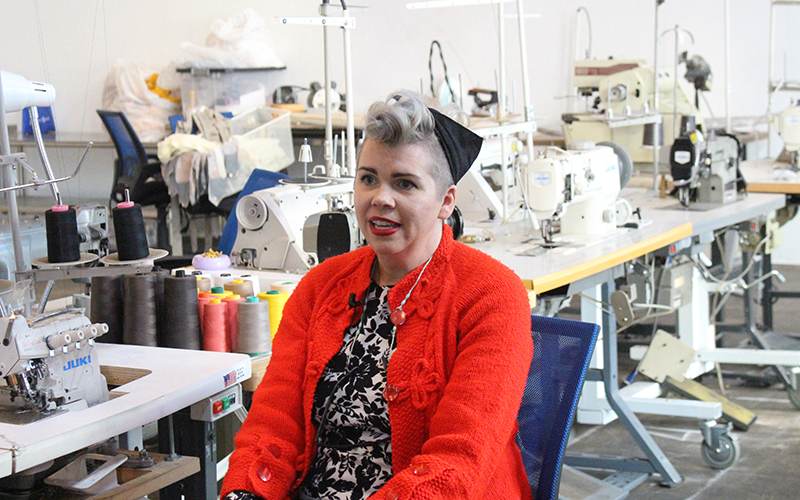 Angela Johnson, co-founder of the Arizona Apparel Foundation, is also the creator of Turning T-Shirts into Couture, an apparel company that refashions old t-shirts into new clothes. (Photo by Ethan Millman/Cronkite News)

With all products produced in their own facility, co-founder Sherri Barry said the foundation avoids the environmental impact of shipping clothing from factories overseas.

Johnson said the apparel group wants to step away from the fashion industry’s unsustainable practices.

“The fashion industry is literally the second-most-polluting industry on the planet next to the oil industry,” Johnson said. “And the reason is because there are a lot of processes involved in making clothing that use a lot of the resources on our planet.”

Designers make a couple hundred garments at a time, and that’s just how they want it.

“The fact that fast fashion has kind of gotten very out of control and that people are buying clothes for such cheap prices – you can buy a shirt for $10 or $20, it’s really unbelievable because it’s completely backwards in what it really should be,” Johnson said.

“Our goal is to be able to manufacture clothing here and we don’t want to be able to make millions of the same thing, because in our eyes, it’s the wrong way we’ve been going,” Johnson said. “In fact, clothing should not be so mass produced that it can be made for $10. It really takes the specialness out of it and you’ll be wearing something everyone has.”

Johnson said she has practiced sustainable fashion long before founding Arizona Apparel Foundation. For one of her biggest projects, Johnson designs clothes from old T-shirts. By recycling clothes, she avoids using new materials.

The warehouse group offers classes in sewing, screen printing and other fashion-related skills to the public. The classes, most of them free, are part of its partnership with Tempe.

Tempe provides the facilities as an in-kind donation, and in return, the foundation gives the public a place to learn more about the fashion industry. Barry said the foundation has put about $50,000 into reworking the facility.

The foundation works with local communities on their projects, such as helping create prom dresses with the Cinderella Affair, a volunteer group that helps girls around the Valley afford to attend prom.

Tempe Economic Development Program Manager Jill Buschbacher said that prior to Johnson and Barry coming to them, they weren’t aware of the demand.

“It was really interesting when they came to us because we were a little put off by it,” she said. “We thought, ‘this isn’t something we’ve really heard about. They had all the right pieces in place and expertise and funding. It came together very nicely.” 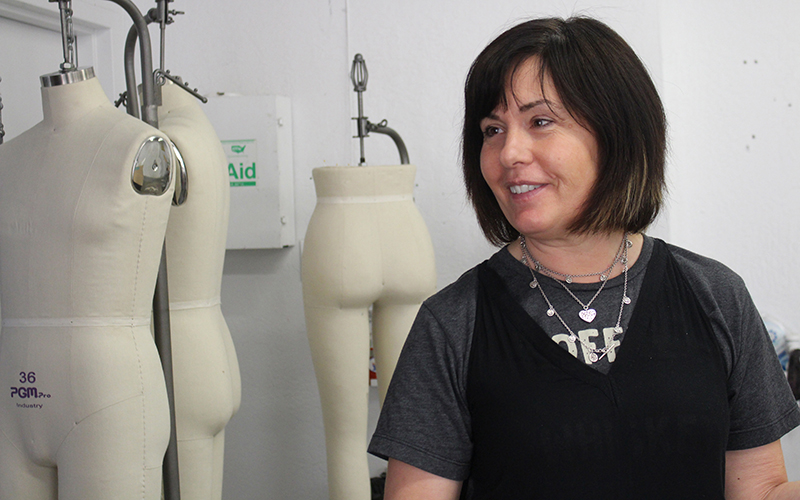 Sherri Barry, a co-founder of Arizona Apparel Foundation, leads visitors on a tour of the company’s warehouse. (Photo by Ethan Millman/Cronkite News)

Barry said the apparel foundation wants to grow its community of designers along with the fashion industry, adding budding designers from community colleges and local universities.

The foundation also plans to offer scholarships for a free office to new designers and to increase their public outreach,.

“We think the upcoming generation is looking for a unique product,” Barry said. “They’re more conscientious consumers. I think now that someone with a great idea and a passion can put that out on social media and online and create a market.”