BROWNSVILLE, Texas — The first thing you notice is how green everything is.

Lush, sub-tropical plants and trees cover the land. The air is thick with moisture. Birds caw and chirp overhead while the “thwack” of a golf club striking a ball rings out across a manicured course.

In the distance, an 18-foot steel and concrete border fence towers over the landscape, ending abruptly along a busy highway. The Rio Grande snakes through the property.

This is River Bend Resort & Golf Club, a 319-acre community of senior-living homes and RVs that straddles the U.S.-Mexico border here at the southern tip of Texas.

It’s also a case study in how President Donald Trump’s proposed wall across the Southwest would affect the people who live on private property along the border.

Privately owned land makes up about two-thirds of the southern border, most of which is in Texas, according to the U.S. Government Accountability Office. This means the government will have to purchase the land from these owners to build the proposed wall.

Because of a 1970 treaty with Mexico, nothing can be built that would interfere with the flow of the Rio Grande, so the proposed continuation of the wall will be erected on a levee to the north of the river. Sitting south of the levee is 70 percent of River Bend’s property.

About 200 homes and 15 of the resort’s golf holes are situated in a half-mile “no man’s land” that would exist between the proposed wall and the winding river.

“Are we going to have to issue a gate code or show our passports in order to play golf or go to the homes?” joked Jeremy Barnard, River Bend’s general manager.

A Brownsville native, the jovial Barnard grew up going easily back and forth across the border with friends on both sides.

“I don’t like the wall, personally,” he said. “We support our president, but we just don’t feel a wall is the answer.”

The Rio Grande snakes through River Bend Resort & Golf Club in Brownsville, Texas. Mexico is to the left, the U.S. is to the right. (Photo by Mindy Riesenberg/Cronkite News) 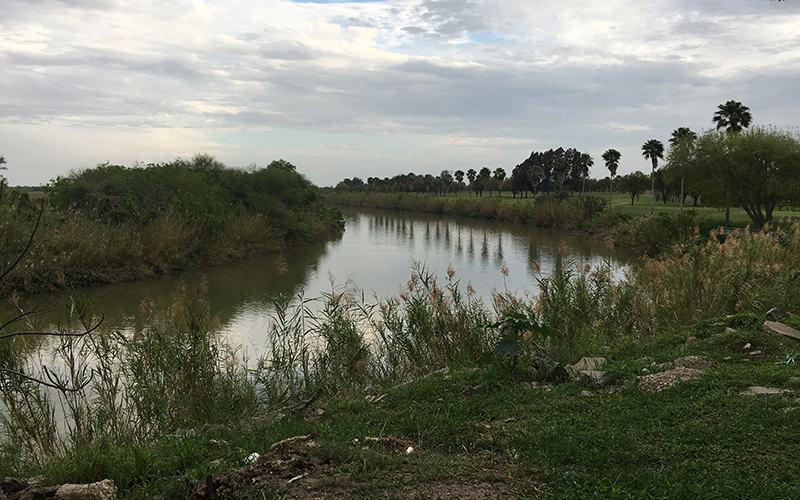 A levee sits where a border wall would cut across the River Bend Resort & Golf Club in Brownsville, Texas. The homes to the left are on the northern (U.S.) side and the homes to the right sit in a “no man’s land” that’s neither Mexico nor the U.S. (Photo by Mindy Riesenberg/Cronkite News) 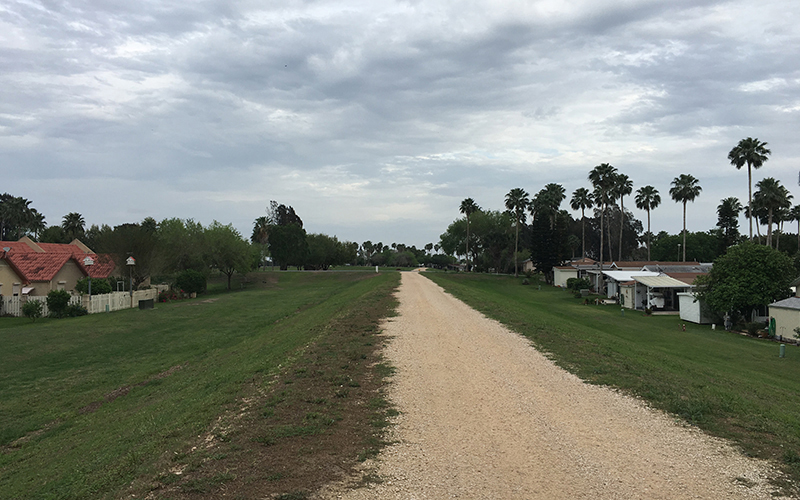 A U.S. Border Patrol truck sits on the Mexico side of the Brownsville border wall. (Photo by Mindy Riesenberg/Cronkite News) 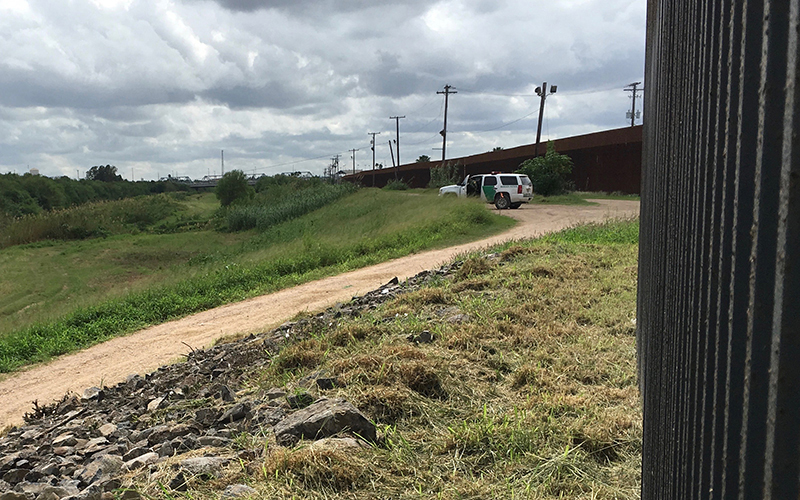 A border wall already runs up to both sides of the River Bend Resort & Golf Club. Erected in 2006, this part of the wall stands 18 feet and ends abruptly along a busy highway, leaving a gap several miles wide. (Photo by Mindy Riesenberg/Cronkite News)

Max Emmert, a 10-year resident of River Bend Resort in Brownsville, Texas, said he doesn’t believe a wall is necessary near his home. (Photo by Mindy Riesenberg/Cronkite News) 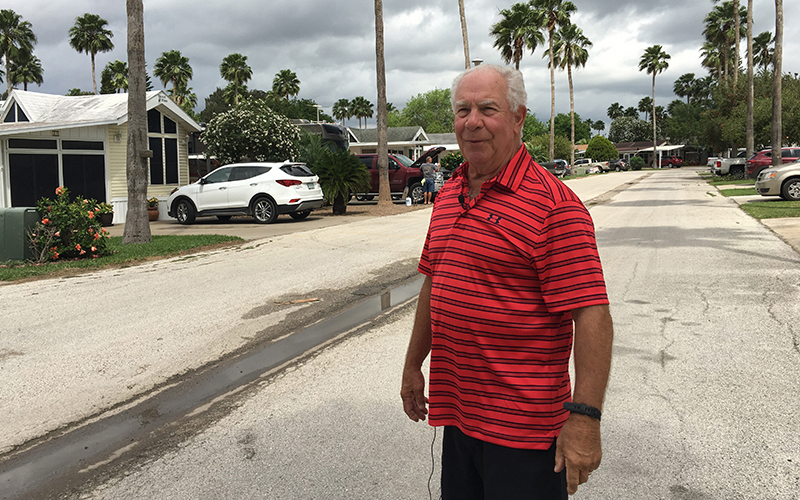 A section of the current border wall stops at the edge of the River Bend Resort & Golf Club in Brownsville, Texas. Mexico sits to the left, the U.S. to the right. U.S. Border Patrol agents monitor the road to the left. (Photo by Mindy Riesenberg/Cronkite News) 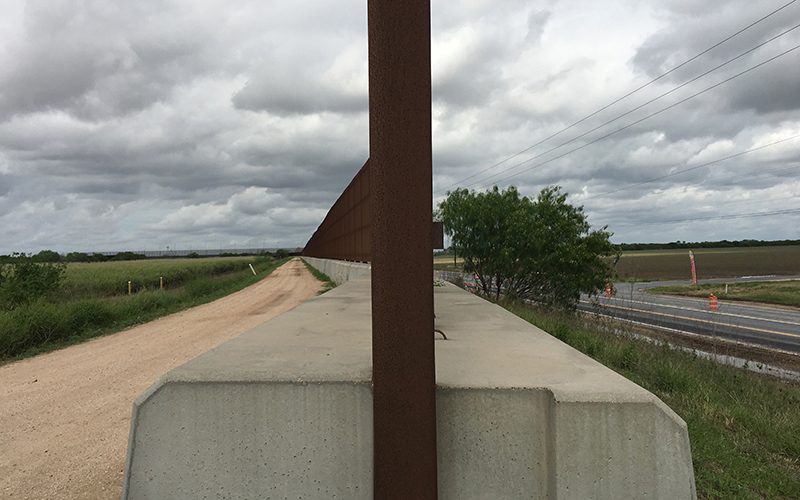 A 20-year resident of River Bend, Pat Bell says she’s never been afraid of people crossing the border on her property, and is against the building of a wall. (Photo by Mindy Riesenberg/Cronkite News) 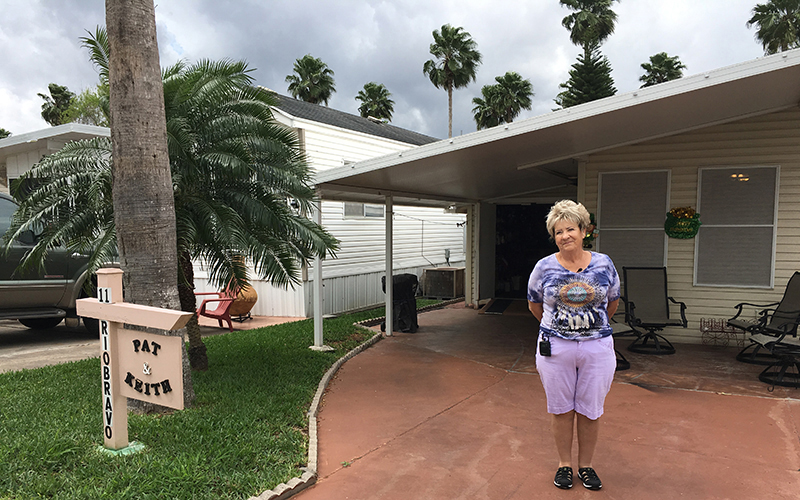 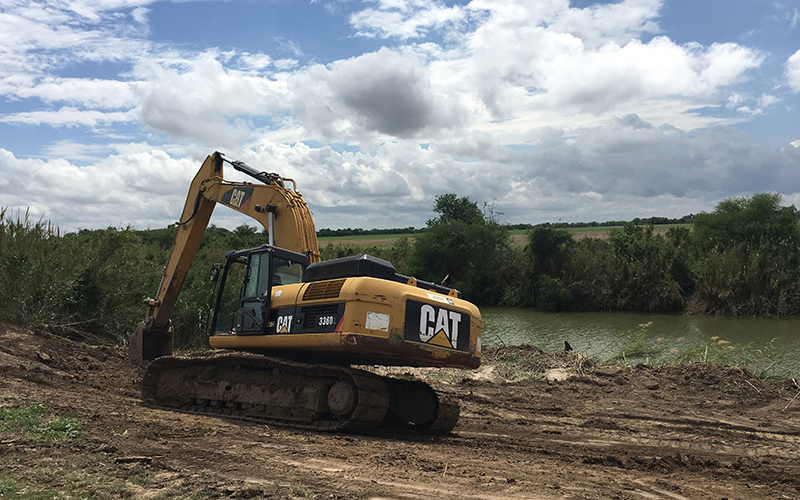 A portion of the River Bend Golf Course would be in a “no man’s land” between the proposed border wall and Mexico. The levee to the right is where the wall would be built. (Photo by Mindy Riesenberg/Cronkite News) 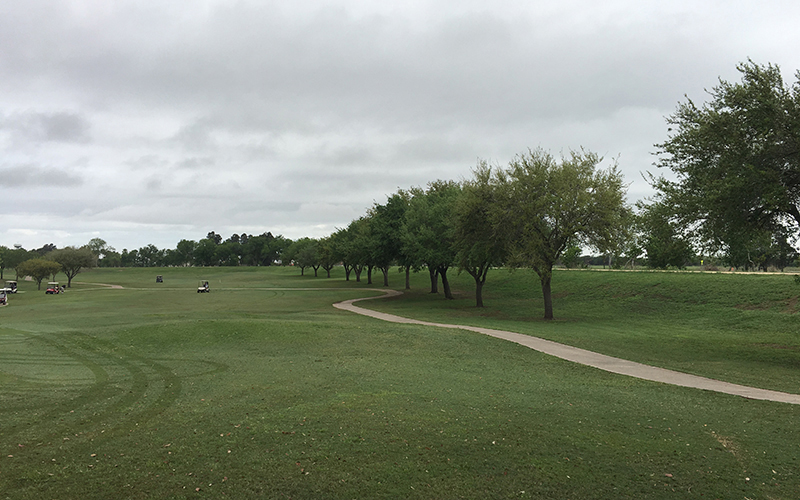 A border wall built in 2006 ends abruptly at the edge of the River Bend Resort & Golf Club in Brownsville, Texas. (Photo by Mindy Riesenberg/Cronkite News) 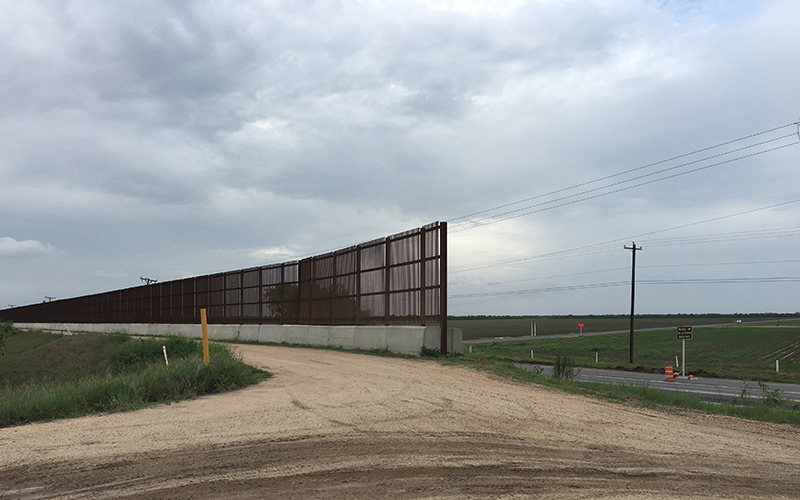 If it ain’t broke don’t fix it

Barnard said he believes the money to build a wall would be better used to purchase more boats and drones, and to put more border patrol officers to work.

Although drug-running activity was an issue in the past, Barnard pointed out that the resort has seen a decrease in activity across the river since instituting a closer relationship with U.S. Immigrations and Customs Enforcement (ICE).

Border patrol boats launch from a ramp on the property and officers are friendly with resort employees and residents.

“It’s not like building a wall fixes anything,” Barnard said.

Another deterrent to those crossing the river is the removal of tall, thick brush that lines the banks, making it easier for U.S. Border Patrol agents to see people coming across.

Lee Berndt is a golf course turf management expert who is overseeing the brush removal at River Bend. He said a border patrol station on the river at the resort would be a better idea than building a wall.

“Plus, it would be saving the government $150 million,” he said.

What Berndt is alluding to is the approximate amount of money the federal government would have to pay in order to buy the River Bend property to build a wall.

Two border walls already run up to the sides of the River Bend property, and a person can easily walk through the several-mile gap between them. Connecting these walls would create an eyesore in the middle of the community and decrease property values, according to Barnard.

Resort management had planned to begin $1 million worth of new construction on undeveloped property, but talk of the wall has put all real estate development on hold.

Barnard worries that a wall would create a flood of people moving away and a significant drop in golf course attendance.

“For the residents living on the south side of the wall, I don’t know how many of them are going to want to live there feeling like they aren’t in America,” he said.

Pat Bell has lived at River Bend for almost 20 years and said she has never been afraid.

“I’ve left my purse outside, my car unlocked,” she said. “I’m not scared to drive into Mexico either.”

Bell said she doesn’t want a wall, and doesn’t want to send a message to her Mexican neighbors that they are unwelcome.

Max Emmert has been a River Bend resident for 10 years.

“I think a wall would be a travesty and I don’t think it’s necessary,” he said. “We feel no threat at all.”

He agrees with the construction of a border wall in many of the other border areas, but not at River Bend.

“We should leave it as it is, and maybe just add more security cameras,” he said.

Bell and Emmert’s views reflect those of the majority of border residents.

If a wall is ultimately built, both Bell and Emmert said they would move, even though they wouldn’t want to.

Officials and law enforcement see other options along border

There’s already a wall across large swaths of Brownsville.

“This wall’s been here for 10 years,” said Brownsville Mayor Tony Martinez. “It’s not something new.”

But Martinez agrees with River Bend’s management and residents that a wall is not the solution for all areas.

“The wall has done one thing of some assistance, and that’s to give the border patrol more time to react to issues,” he said. “But if changes are just for optics and not long-term solutions, we won’t get anywhere.”

J.D. Salinas, III, chairman of the Texas Border Coalition, a consortium of mayors, county judges and economic development commissions along the border, considers construction of a border wall an outmoded strategy.

“We recommend a strategic investment at the border itself, attacking the cartels in cooperation with the Mexican government before their smuggling operation crosses the border, preventing them from crossing between the ports of entry,” he said.

Salinas also suggests putting more boats and agents along the Rio Grande and the removal of brush along the river to increase sightlines.

The Cameron County Sheriff’s Office, which covers Brownsville, also suggests that more patrols would be a better use of funds.

“There are certain areas of the county you can’t completely cover,” said Chief Deputy Gus Reyna.

Instead of a wall, the Sheriff’s Office is hoping to get funding from the federal government to hire additional officers to patrol the border area.

“The border belongs to the county, and any issues that happen in that area, we are the ones who respond,” Reyna said.

Back at River Bend, Jeremy Barnard has an invitation for President Trump.

“I’d love to have him come play the golf course and have an open dialogue,” he said. “I think we could work out something that would be good for them and good for us.”