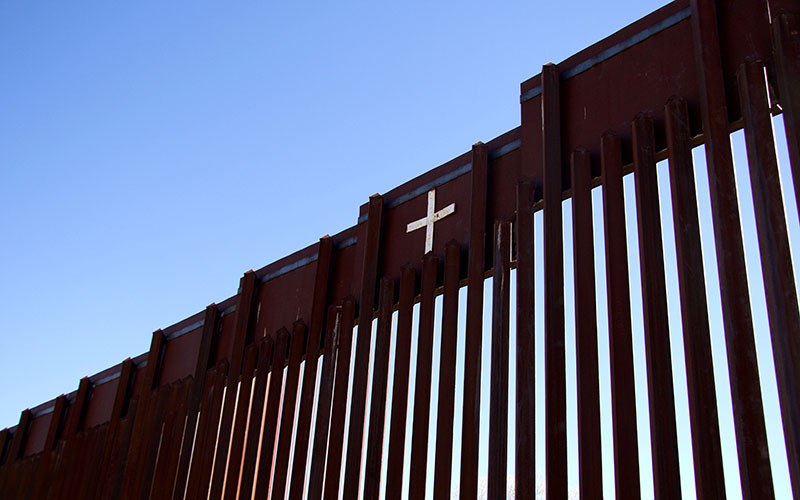 NOGALES, ARIZONA – As President Donald Trump signed executive orders in Washington to build a wall and increase enforcement of the U.S.-Mexico border, Carlos Santa Cruz’s small section of fence behind his house was quiet and serene. A landscaper in Nogales and Rio Rico, he has lived right next to the border for 37 years and has seen the changes that have come with different presidential administrations.

“Back in the day you could see guys standing, from right here, with AKs,” he said. “Not anymore, now our community is safe. I’ve got grandsons.” 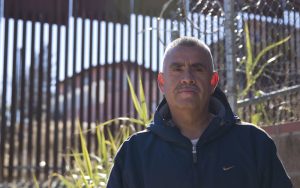 Carlos Santa Cruz stands in front of the border wall in Nogales on January 25, 2016. (Photo by Josh Orcutt/Cronkite News)

But his feelings are mixed, because as the wall has stretched higher, it has strained Nogales’ relationship with neighboring Mexico.

“It kills Nogales when you cannot see through to Mexico, and Mexico can’t see through to Nogales, Arizona,” said Santa Cruz. He said residents on each side can talk through the fence. But he worries a wall would change that. “Because we’re getting more like being in a prison. Say we’ve got somebody, family, who doesn’t have any papers. We can talk from here, ‘Hey how are you?’ If he put up the wall — not anymore.”

In a speech following Trump’s signing of the two executive orders, the president said his measures “will save thousands of lives, millions of jobs and billions and billions of dollars” while enhancing the U.S.’s relationship with its southern neighbor. And he reiterated that Mexico would reimburse the U.S. for the cost of construction.

The orders call for the government to “immediately plan, design and construct a physical wall along the southern border,” add 5,000 new Customs and Border Patrol officers, triple the current number of Immigration and Customs Enforcement officers and strip federal grant money from sanctuary cities, among other provisions.

Nogales is the busiest international crossing in Arizona for workers, shoppers and a hub for international trade. More than 60 percent of Nogales’ sales tax comes from Mexican shoppers crossing the border daily, according to the Arizona-Mexico Commission.

The mayor of Nogales, John F. Doyle, said even if the increased border security is not targeting legal border crossers, the message Trump is sending to Mexico will hurt the border economy. 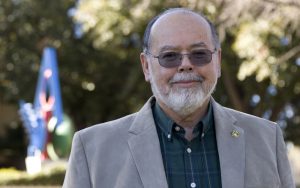 “There’s going to be a negative runoff that will probably reduce by a certain percentage more shoppers at this point,” he said during an interview with Cronkite News. “If the wall ever materializes you’re going to see more devastation toward the border communities.”

Business leaders on the border are concerned that damaging the U.S.’s relationship with Mexico will have far-reaching consequences, Doyle said, because Arizona’s economy not only greatly benefits from border shoppers, but the U.S. is dependent on produce imports as well.

“The winter produce supplies the American food supply,” he said. “As far as produce goes, 75 percent of American produce comes from neighboring Mexico.”

A Cronkite News-Univision News-Dallas Morning News poll published in July 2016 found that the majority of residents of U.S. and Mexico border cities oppose a border wall — 69 percent on the Mexico side and 59 percent on the U.S. side.

But others praised Trump’s promise to go after and deport criminals living in the U.S. illegally. Maria Espinoza, co-founder and national director of the Remembrance Project, said crimes committed by undocumented immigrants, especially murders, are more important than any negative economic impact from increased security. Trump specifically recognized her organization during his speech at the Department of Homeland Security.

“Americans are very gracious and compassionate people and if Mexico would like to be more like America and prosper as well then I would say that they can secure their border and put in place what’s best for their families,” she said during a phone interview. “One life stolen by an illegal alien is one life too many especially if it’s your family member.”

“It’s not the solution,” he said. “It’s an option that may discourage or reduce, but what he says that a great big, beautiful wall is going to stop everything, I think he’s fantasizing. It’s just not going to happen.”

Paige Corich-Kleim, a desert aid worker for No More Deaths, an organization that advocates for migrants, is concerned the new border enforcement measures will only make crossing the border more dangerous.

“What we’ve seen in the past is the effect of the walls on the border has meant an increase in violence and migrant deaths,” she said. “… We believe migration is a human right and not dying because of an unjust border policy is a human right.”

Political leaders in Arizona had mixed reactions to President Trump’s executive orders. Phoenix Mayor Greg Stanton is concerned the wall will damage Arizona’s relationship with Mexico and therefore Arizona’s economy, which he said draws 100,000 jobs on commerce with Mexico. The City of Phoenix opened a trade of office in Mexico City last fall.

Gov. Doug Ducey said he was happy that “our southern border counties are going to have some attention and some public safety.”

.@dougducey on #Trump border wall: “This is something that needs attention.” pic.twitter.com/RvsGkNJbcj

The governor was in Mexico City 10 days ago to discuss economic development opportunities.

“We have a good relationship; I would say it’s a partnership,” he said. “We are neighbors. We’re going to be a good neighbor. Public safety is important to them as well.”

A few hours after Trump’s speech, Mexican President Enrique Peña Nieto tweeted a video statement saying Mexico would not pay for the wall.