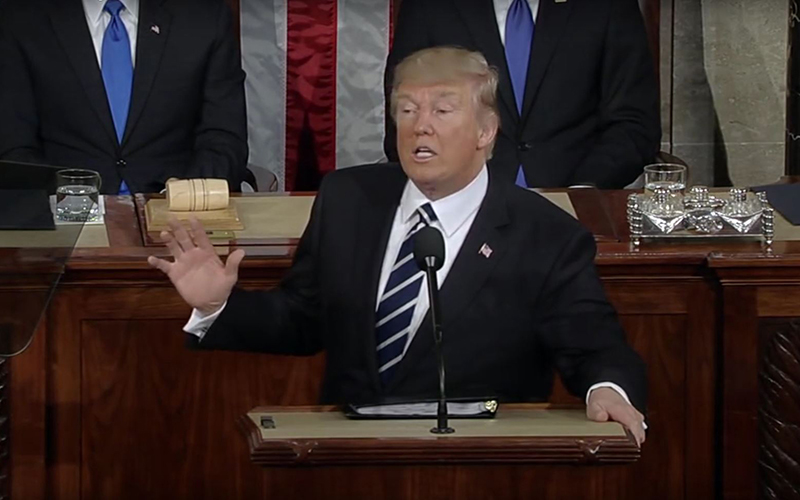 President Donald Trump, in his speech to a joint session of Congress last week, gave few details with his call for a “merit-based” immigration system, leaving experts guessing at its potential impacts. (Photo courtesy the White House)

WASHINGTON – Immigration advocates are unsure what the merit-based immigration system President Donald Trump called for on Tuesday would do for the country – mostly because they don’t know exactly what the president meant.

“Switching away from this current system of lower-skilled immigration, and instead adopting a merit-based system, will have many benefits,” Trump said in his address Tuesday to a joint session of Congress. “It will save countless dollars, raise workers’ wages, and help struggling families – including immigrant families – enter the middle class.”

But the president did not say what “merit” means – education, specialization or filling a gap in the market could all be considered meritorious traits – just that immigrants should be able to support themselves financially when they come to this country.

There were no more details in his speech, and the White House did not return a request for comment or clarification on his proposal.

A merit-based plan would be a shift from the current American immigration system, which allocates visas based on criteria of diversity, employment needs, humanitarian aid and family connections.

What needs to be determined is where the existing criteria would fit in to a new system, said immigration attorney William Stock in an email. He and others said one possibility is that prioritizing high-skilled workers could be a backdoor way to limit immigration based on family ties in the U.S.

“I think what we’ll wind up seeing is a significant reduction in family-based immigration and potentially an elimination of the visa lottery,” said Mo Goldman, an immigration lawyer in Tucson.

“It could have a negative impact as far as the need we have in certain areas of our industries,” he said. “Not everyone who comes here as an immigrant is going to wind up working for Intel.”

Different regions of the country have different needs and certain sectors, like agriculture, rely heavily on migrant workers. Data from the National Agriculture Workers Survey show that almost 80 percent of agricultural workers are foreign-born.

“When you get into Arizona, we have such a huge diversity of industry, be it agricultural, industry or tourism,” Goldman said.

The Western Growers Association declined to comment on Trump’s proposal, based on the lack of detail in his address, but the Arizona Farm Bureau said in a statement that it hopes the president will address all of the issues with immigration reform moving forward.

The president also did not detail how rigid a new system would be. For example, Stock said, many Midwestern towns face population and labor force decline, but those cities require immigrants of all skill levels to fill the vacancies.

Trump did reference Canada’s immigration system as an example of the kind he hoped to implement. But Canada learned the hard way that weighting admission in favor of higher educational attainment is not a recipe for success.

“Whether or not someone has a particular job offer is a better determinant (of success) than if they just have a Ph.D.,” said Meghan Benton, a senior policy analyst with the Migration Policy Institute. “High-skilled migrants were massively underemployed, or in some cases, unemployed.”

She said high-skilled migrants in Canada were encountering barriers – language, unrecognized professional credentials and so on – that lower-skilled workers did not have to face.

Responding to these issues, Canada amended the point system in 2015 and moved toward a system that prioritizes migrants who have job offers awaiting them in the country, Benton said.

Furthermore, there is hardly a dearth of skilled immigrants in the current system.

“There tends to be an equating of low-skilled with family-based immigration,” said Doris Meissner, a senior fellow at MPI and the former U.S. Immigration and Naturalization Service commissioner. “That’s not really accurate.”

She said skilled immigrants are admitted to the U.S. under all the current immigration criteria, “not simply through the labor market categories.” In fact, she said, there has been a recent uptick in the number of skilled immigrants coming here for family reasons.

Regardless of whether the president intends to fully replace the current system or just change the proportions, Meissner said the consensus among immigration experts is that legal immigration across all skill levels and sectors is necessary for a healthy economy.

“I think on paper, the idea of targeting people with the highest skills is something that has a certain appeal,” said Robert Sakaniwa, the associate director for advocacy at the American Immigration Lawyers Association.

“But the government, I don’t think, is the best arbiter of what employees are needed in the country. The actual employers are the best judge of that,” he said.