Sen. Jeff Flake, R-Arizona, said he hoped to “hear a unifying message” in President Donald Trump’s first speech to Congress, noting that policymakers will have “to come together to pass big things.” (Photo by Andres Guerra Luz/Cronkite News) 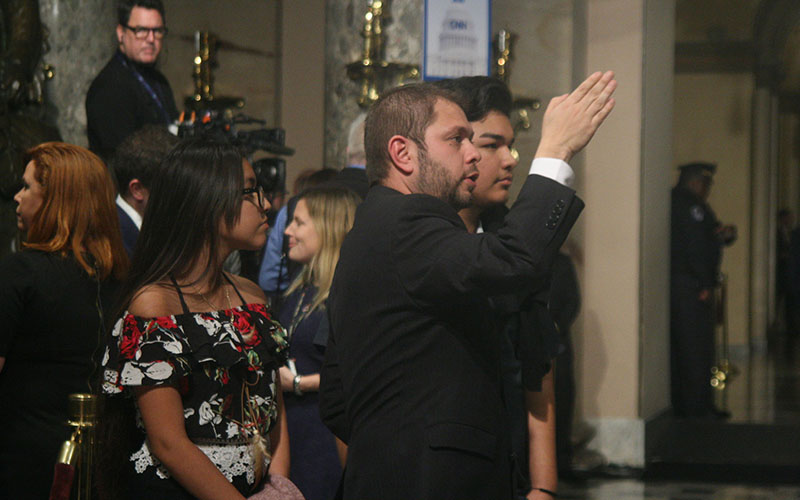 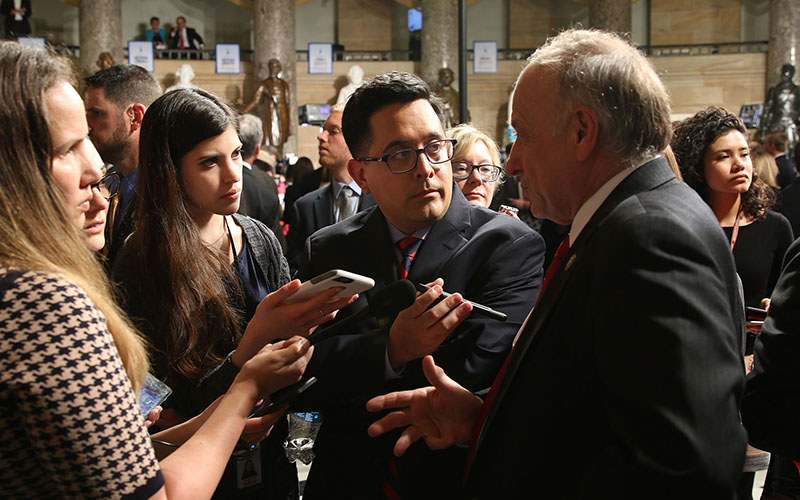 Reporters gather around a member of Congress in the Capitol’s ornate Statuary Hall on Tuesday for reaction to President Donald Trump’s first speech to Congress. (Photo by Dustin Quiroz/Cronkite News)

WASHINGTON – President Donald Trump delivered an hourlong speech to Congress Tuesday that, while short on detail, was long on rhetoric that kept Republican lawmakers jumping to their feet and Democrats mostly sitting on their hands.

The speech was Trump’s first to a joint session of Congress. He spent most of the first half highlighting the actions taken by his administration during its first month, before offering plans for prosperity and increased national defense for an America that puts itself first.

“I thought it was visionary,” said Rep. Andy Biggs, R-Gilbert, who called it a “masterful performance” by the president.

“He didn’t get into the weeds on things,” said Biggs. “I myself would’ve preferred more details on the transportation infrastructure plan, maybe a little something more on the tax plan.”

If there was one thing Democrats and Republicans agreed on, it was that the address, while lofty, was thin on specifics. But Democrats did not appear to be as dazzled by the president’s rhetoric as their GOP counterparts.

“We are lacking a lot of detail, a lot of specificity,” said Rep. Tom O’Halleran, D-Sedona. He praised Trump’s commitment to keeping the nation safe but wanted more detail.

“It was a lot of apple pie, not a lot of real concrete concepts relating to the needs of our country from the perspective of what we really need to get done with the amount of money that was mentioned tonight,” O’Halleran said of the “optimistic” speech.

The money included what Trump said would be a $1 trillion investment in infrastructure and what he called the largest one-year increase in defense spending, a figure that has been reported at more than $50 billion.

A little more than a month after he was at the Capitol to deliver an inaugural speech that painted a darker portrait of the country, with its picture of “American carnage,” Trump returned Tuesday to say that a “new chapter of American greatness is now beginning.”

“I’m here tonight to deliver a message of unity and strength … deeply delivered from my heart,” said Trump, who asked lawmakers to envision what America will look like in nine years, on the 250th anniversary of its independence.

Many of his plans to take the country there were familiar to his supporters.

Trump repeated his promises to “drain the swamp” of Washington, to repeal and replace the Affordable Care Act and to build a “great, great wall” along the length of the Southwestern border.

He vowed to put America first, echoing campaign pledges on “free and fair” trade and job growth, as well as introducing promises to pursue paid family leave and clean air and water.

While most of his points earned applause from Republicans, the response from across the aisle was muted, save for the occasional hiss and thumbs-down from otherwise-subdued Democratic lawmakers.

“I think he presented a pretty compelling argument, not a lot of details but I think it’s an opportunity for us to move forward,” said Rep. Paul Gosar, R-Prescott, who had high praise for the president’s get-tough stance on immigration.

But the president’s approach to immigration – which included a new call for a “merit-based immigration” system that would keep low-skilled workers from entering the country – did not sit well with Rep. Raul Grijalva, D-Tucson, who sat stone-faced through much of the address.

“Trump used the stature of our nation’s most prestigious venue to continue vilifying immigrants and generalizing America’s needs without offering content,” Grijalva said in a statement released after the speech that he said was filled with “bluster … and the facts never matter.”

But Grijalva noted that Trump’s proposals will remain just that without support from Congress, warning Republicans not to blindly follow their leader.

“They will be responsible for any reckless policies they rubberstamp, and in many cases, equally culpable in their creation,” he said of GOP lawmakers who control both houses of Congress. “The American people have a safeguard against the worst intentions of this administration: It is to hold their Congressional leaders accountable.”