Mesa teens Jacqueline and Angel Garcia de Rayos, whose mother was deported to Mexico this month, were at the Capitol as guests of Reps. Ruben Gallego and Raul Grijalva, from left, for President Donald Trump’s first speech to Congress. (Photo by Dustin Quiroz/Cronkite News) 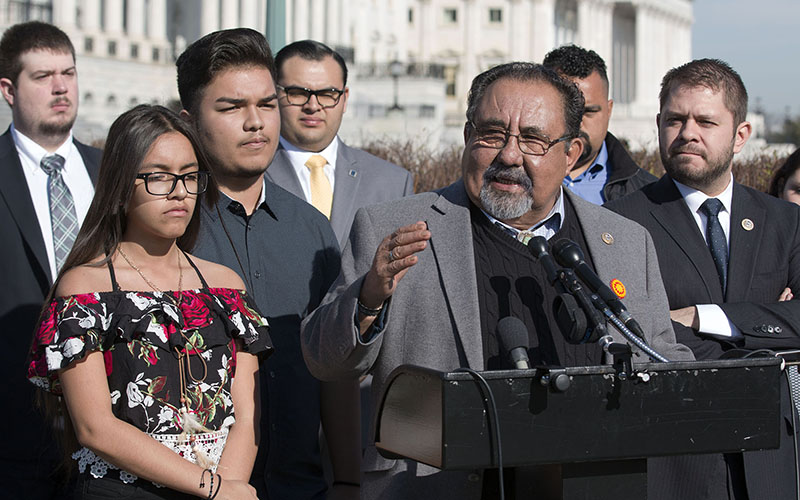 Rep. Raul Grijalva, D-Phoenix, said the experience of Jacqueline and Angel Garcia de Rayos, whose mother was deported, “is not unique” in immigrant communities since President Donald Trump’s order cracking down on deportations. (Photo by Dustin Quiroz/Cronkite News) 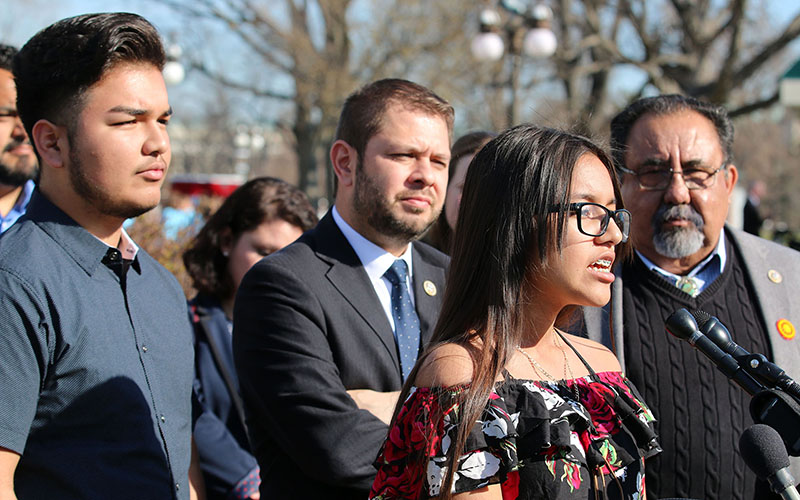 Angel Garcia de Rayos, left, and his sister, Jacqueline, speak at the Capitol about their mother, who was deported this month. The teens were guests of Reps. Raul Grijalva, right, and Ruben Gallego for the president’s speech to Congress. (Photo by Dustin Quiroz/Cronkite News) 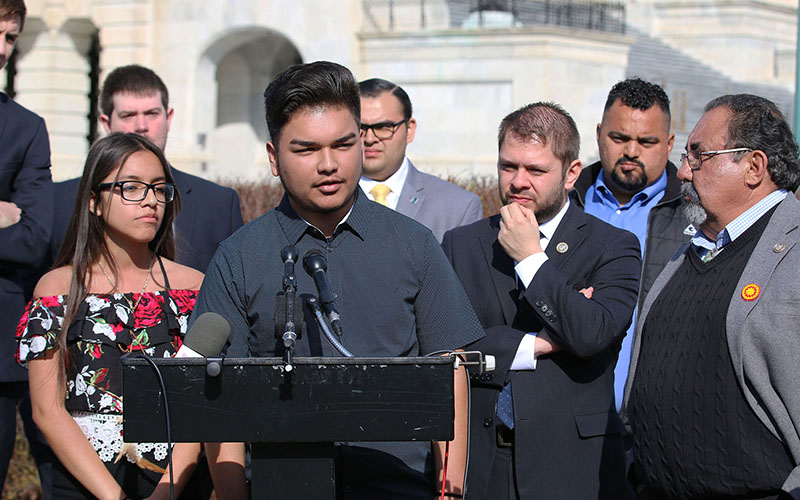 Angel Garcia de Rayos said he and his sister Jacqueline came to Washington to send a message to President Donald Trump after the Feb. 9 deportation of their mother. Trump gave his first address to a joint session of Congress Tuesday. (Photo by Dustin Quiroz/Cronkite News)

WASHINGTON – Angel and Jacqueline Garcia de Rayos could have spent Tuesday celebrating their mother’s 36th birthday, but the Mesa teens instead spent it in Washington instead to protest her deportation.

The teens were invited by Arizona Democratic Reps. Raul Grijalva and Ruben Gallego to attend the first speech to Congress by President Donald Trump – the man they blame for taking their mother away from them.

“Today I’m here in D.C. fighting for my family and my community,” said Angel, 16. “It’s been weeks since my mom’s deportation, and since then it’s been really hard for me and my family.”

Guadalupe Garcia de Rayos’ case made national headlines when the Mesa mother went to what she expected to be a routine meeting with Immigration and Customs Enforcement officials on Feb. 8 but was detained and deported to Nogales, Mexico, instead the next day.

She had been reporting to ICE for eight years after her arrest in 2008 for using a false Social Security number to work as a custodian at a Valley business. She spent six months in jail and was released with the requirement that check in with authorities annually.

But that changed with Trump’s signing of an executive order last month that directed immigration officials to deport any illegal immigrants with a criminal record.

“Unfortunately, the Garcia de Rayos family’s experience is not unique. In the first month of Trump’s presidency, we have seen a wave of raids and arrests that have torn many immigrant families apart,” Grijalva said in a statement with Gallego. “These actions have also caused deep fear and uncertainty in communities across the country.”

While the Arizonans hope to send a message to Trump, the president will do the same in return. Among the guests he has invited for his speech are three people who had family members killed by immigrants who were in this country illegally.

Several Democrats planned to bring guests who would be affected by the president’s travel ban, who have been harmed by gun violence or who uncovered water problems in Flint, Michigan.

For Grijalva, the decision to bring the Garcia de Rayos children was essential to providing a “face” that counters the hardened criminal stereotype that he believes the immigration crackdown relays to the public.

A previous version of this story accidentally dropped the first name of the deported mom, Guadalupe Garcia de Rayos. The story has been corrected, but clients who used an earlier version are asked to run the correction that can be found here.

“There is a reality, there is a humanity to it,” Grijalva said at a news conference with the teens outside the Capitol Tuesday. “I think the more we present the real story, the real consequences, who’s being hurt in this process, the more the American people will begin to see this in a different light.”

Gallego said violent criminals should not be protected, but that was not the case with Garcia de Rayos.

“Crime unfortunately does happen but let’s be clear,” Gallego said. “Guadalupe did not kill anybody. Guadalupe did not cause a major crime. Guadalupe was working hard just to have an opportunity for her kids to have part of the American Dream.”

Grijalva said he expects more immigration rhetoric from Trump in Tuesday’s speech, which he thinks will just be a platform for the president “beating his chest” and claiming that his immigration initiatives are a success.

“He will talk about the criminals, the bad guys, the bad dudes that he is now on a path to eliminating, he’ll talk about the wall,” Grijalva said, referencing Trump’s pledge for a Southwest border wall. “He’ll talk about those kinds of sensationalist, untrue issues going on in this country relative to immigration and border security, and in doing so gloss over reality.”

The reality, said Jacqueline, 14, is that, “Our community now lives in fear, fear of being separated from their families.”

Angel said that’s why he and his sister felt they had to speak out.