Government attorneys argued to the Supreme Court that the protections of the Constitution should not be extended to a Mexican youth on Mexican soil, even if the Border Patrol agent who shot him was standing in the U.S. at the time. (Photo by Nathan O’Neal/Cronkite News) 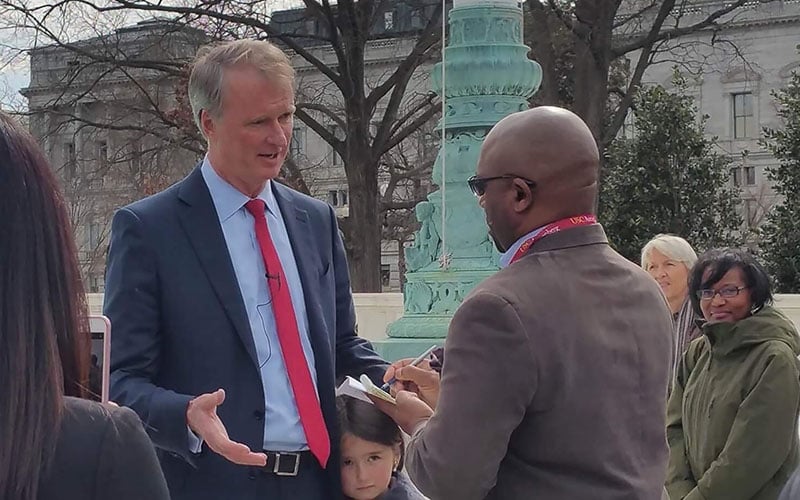 Robert Hilliard argued to the Supreme Court that the family of a Mexican teen, shot by a Border Patrol agent who was in Texas, should be allowed to sue the officer, saying constitutional protections should not just “turn off” at the border. (Photo by Andres Guerra Luz/Cronkite News)

WASHINGTON – The U.S. Supreme Court was asked Tuesday if a Mexican family can sue a U.S. Border Patrol agent who shot and killed their teenage son while the youth and the officer were on opposite sides of the border at El Paso, Texas.

An attorney for the family called it a “ridiculous, unworkable idea” that the Constitution “turns off” at the border and that Border Patrol Agent Jesus Mesa cannot be sued for the 2010 shooting of Sergio Hernandez, who was 15 at the time.

But attorneys for the government argued that there has to be some line marking how far constitutional protections extend, and that line should be drawn at the border. They also said the case raises foreign relations questions that should be left to lawmakers, an argument that seemed to resonate with some justices Tuesday.

The 2010 shooting of Hernandez is one of several along the Southwestern border, including a 2012 case in Nogales where a border patrol agent shot through the border fence and killed a teen who had allegedly been throwing rocks at the officer. No rocks were later seen in video footage of that incident, which has yet to go to trial.

The El Paso case started when Border Patrol agents were called for a report of a drug smuggling operation at the border and found youth, including Hernandez, running back and forth in a culvert separating the U.S. and Mexico. When an agent grabbed one of the youths, the others ran and hid behind pillar on the Mexico side.

When Hernandez stuck his head out from behind the pillar, Mesa shot him in the head, killing him.

The family said Sergio and his friends were merely playing a game in which they ran up to touch the border fence and ran away. Cell phone video showed that Hernandez was unarmed.

The Mexican government tried to charge Mesa, but the U.S. refused to extradite him, which led the family to file suit.

But the government said the family does not have a claim.

But Robert Hilliard, the Hernandez family’s attorney, said that in previous cases the Constitution has reached overseas “depending on what it needs to do and what it’s being asked to do,” and there is no reason why it cannot stretch just dozens of feet into Mexico in this case.

He said this is not the first case to pose this issue, which is “an ongoing problem along the Southwest border” that the court needs to address.

“The interaction at the border, at our Southwest border, has resulted often in shots being fired across the border,” Hilliard said. “It’s not unique to Sergio Hernandez.”

Hilliard asked the court to find that when a U.S. officer shoots someone from U.S. soil, the Fourth Amendment should apply, as long as the victim was “in close proximity” to the border. He said proximity should be enough to warrant a specific rule in this situation because the U.S. “exercises some degree of control into the culvert.”

Justice Stephen Breyer, noting the joint jurisdiction over the culvert, said that extending constitutional protections to that area might protect children from both countries if it was an area “where both American children and Mexican children might play.”

But an attorney for Mesa, Randolph Ortega, argued that while the two countries share maintenance of the culvert, “the laws of the United States do not apply beyond the middle of the culvert.”

“In areas of the United States where there is a clearly defined border, as we have here, the Fourth Amendment stops unless the person seized – in this case Hernandez – had some voluntary contact with the United States,” Ortega said.

In response to questions from the justices about what would happen if Hernandez was solidly on U.S. soil, Ortega said that in this case there is a “very real border. Wars have been fought to establish borders. The border is very real.”

But Justice Ruth Bader Ginsburg asked why the border is part of the discussion when Mesa shot and killed someone who was unarmed, not dangerous and not threatening the officer’s safety, something agents are clearly instructed not to do.

“This case has, as far as the conduct is concerned, United States written all over it,” Ginsburg said. “There’s nothing about Mexico. The border patrol guard doesn’t take his orders from Mexico.”

But Kneedler said the border is important.

“Here, you have a cross-border incident which necessarily gives rise to foreign relations problems, which are committed to the political branches. And when Congress has chosen to address remedies as a statutory matter under the Federal Tort Claims Act, it has created an exception for injuries occurring in foreign countries.”

While Mexico held the U.S. accountable for the shooting, the U.S. investigated “and concluded that a criminal prosecution should not be brought, but Mexico regards it as the United States’ responsibility to control this conduct.”

“The Border Patrol, since this incident, and we cite this in our brief, has undertaken numerous reforms,” Kneedler said. “It has changed its training, it has given more detailed instructions on the use of deadly force, it has adopted a transparent system of investigations.”

A decision in the case should come later this spring or summer.