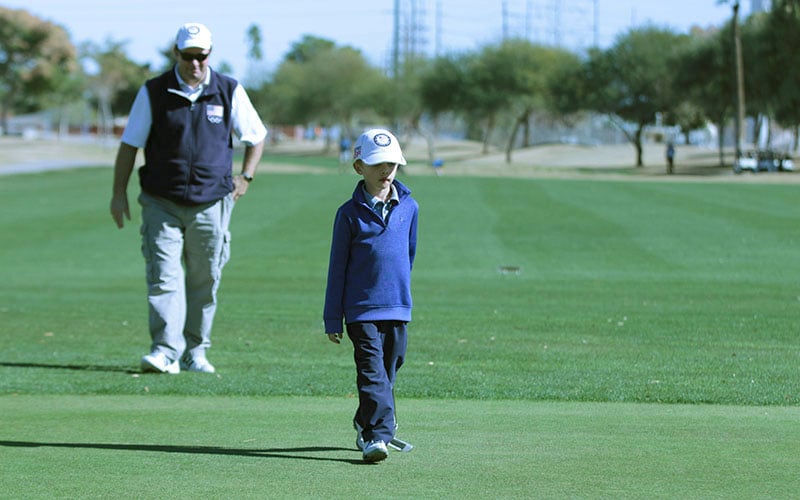 Easton Reischl, 6, is followed by his father and caddie Phil Reischl during a U.S. Kids Golf event at Ken McDonald Golf Course in Tempe. (Photo by Tyler Handlan/Cronkite News)

TEMPE – In youth sports, parents often are called upon to coach their children. It’s a dynamic that can be rewarding and successful. It also can be difficult and create conflict, especially if it is an individual sport, such as golf.

On the golf course, parents not only serve as coaches but often as their child’s caddy. It is an arrangement that nearly drove 11-year-old Isaiah Saucedo, who plays in U.S. Kids Golf events around the Valley, away from the game.

“He would get mad at me for no reason,” Isaiah said of his father, Robert. “He didn’t tell me what happened. He would yell. It kind of pushed me back a little where I didn’t want to play that much anymore.”

Robert had to learn to ease off and allow his son enjoy the game.

“It came to the point where I told him, ‘Son, look you have a very expensive set of clubs sitting in the garage. Are you going to use them or are you not going to play anymore?’ ” Robert said. “I told him I realized what I did to (him). It’s one thing as a parent for me to tell him. For him to believe me, I’ve got to display it on the golf course.”

Rob Gray an associate professor and experimental psychologist at Arizona State, said avoiding negative feedback from a parent can become a child’s only objective when competing.

“An unhealthy parent focuses on extrinsic rewards (wins, trophies, tournaments) and puts a lot of pressure on the child,” said Gray, an expert in sports psychology. “It leads to burnout, dropout and lack of enjoyment. The child’s main goal is to play well enough so the parent doesn’t yell at them.

Isaiah has been back playing for almost a year now, but he said it took him about eight months to trust his father again on the golf course.

Robert blames his actions for the mental toll that his son had to endure. They work on it together by practicing situations as if Isaiah hit a bad or good shot and how they would respond to both circumstances.

Not all parents caddy and coach their children. But in U.S. Kids Golf events, that is often the arrangement. The USKG holds year-round events for boys and girls ranging from ages 5 to 12.

Most states have some sort of junior golf program that is operated through the state or through an association like USKG. However, programs in some states do not allow parents to caddy and others don’t allow any caddies at all.

“Overall, 99 percent of parents are very supportive,” said Dale Balvin, director of the USKG Phoenix Tour. “But you’ll run across the 1 percent that just need to let go a little bit. They overcoach, that sort of thing.”

The USKG has a program in place for parents who need guidance.

The Positive Coaching Alliance is a 30-minute online course that problem parents must pass before returning to the course as a caddy or even a spectator.

A parent can only be banned from the course after he or she has been given a red card from the tournament director. Parents with red-card status cannot attend any tournaments until they pass the program.

Most parents are warned during a round for negative comments and receive a yellow card. If they are warned a second time, they receive a red card.

“I’ve got one parent that we kicked off, and he’s back on, and he’s a changed person,” Balvin said. “He’s went through the (Positive Coaching Alliance) program, and he’s done some other lifestyle changes. Totally different person.”

Phil Reischl, a parent who caddies for his 6-year-old son, Easton, has advice for parents focused on maintaining a healthy relationship with their child.

“Don’t say anything if it’s not positive,” Reischl said.

Reischl is a laid-back guy, but in the nine events that Easton has competed in since the beginning of the fall, Reischl said he has seen parents who have gone too far.

“You’ll walk down this range at times and see the dads coaching or moms coaching up to the nth degree,” Reischl said.

“The thing that I would like to tell one of those parents that overcoaches or is negative, is (their child) has probably already tuned you out for golf,” Reischl said. “But the sad thing is, what may eventually happen is that they tune you out as a parent.”

Reischl said some parents want success from their kids more than the kids want it for themselves. That’s when situations can get messy.

“I let (Easton) do almost what he wants when we practice,” Reischl said, indicating his son’s nearby golf push cart.