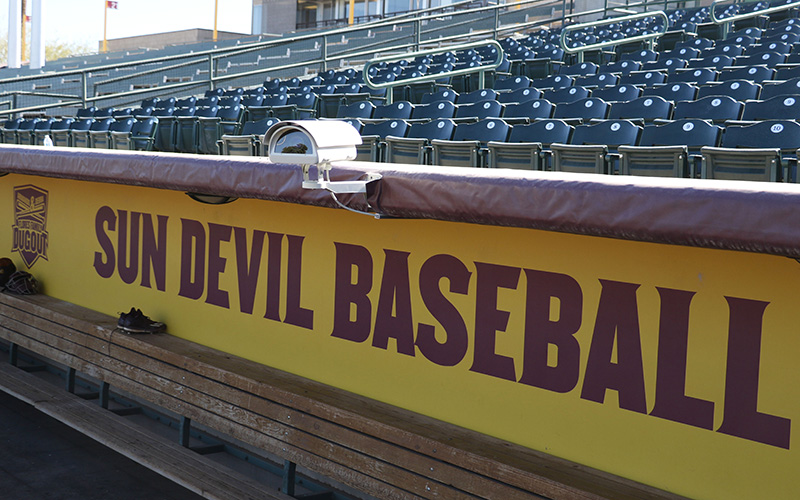 Cameras are stationed atop the dugout at Phoenix Municipal Stadium in Phoenix on Tuesday, Jan. 31, 2017. (Photo by Fabian Ardaya/Cronkite News)

They include a coach, one without a name or even a voice to guide and direct players.

In fact, it helps players direct themselves.

The Sun Devils have installed a new video system at their home park, Phoenix Municipal Stadium. It will allow players and coaches access to a new teaching tool, whether they’re at the ballpark or just looking at their phone.

“I can’t wait to get there and be able to look at my swing, be able to look at other teams, look at their swings,” junior outfielder Andrew Shaps said. “On a Friday night, we could go look at video and be a little more prepared for a Saturday game, stuff like that. If we take advantage of it, it’d be pretty cool.”

Fans can see the new technology at ASU’s opening series against visiting Northwestern this Friday through Sunday.

There are five cameras in the system — one atop each dugout, one in each camera well adjacent to the far side of each dugout, and one above home plate.

Players and coaches will be able to evaluate swing mechanics, view how hitters track pitches and see where they are having the most success in the strike zone. Pitchers can track the movement and placement of their pitches.

The home plate camera will allow coaches and players to analyze how plays develop and where players are positioned to defend certain hitters.

According to NCAA rules, the only restrictions on the usage of a video system are that teams are not allowed to transmit the data to the dugout during a game. Home teams have full access to use the video data before or after a game, however. Teams are not required to share the information with the visiting teams.

Cameras are stationed atop the dugout at Phoenix Municipal Stadium in Phoenix on Tuesday, Jan. 31, 2017. (Photo by Fabian Ardaya/Cronkite News)

For slugger and senior designated hitter Sebastian Zawada, mechanics are everything. Now, instead of going to ASU hitting coach Ben Greenspan to ask about picking up his front foot, he can just go to the footage. Infielder Andrew Snow wants to improve his approach at the plate, so now he can see what pitches he’s swinging at and where he’s having the most success.

It’s a developmental tool that Snow hasn’t had at his disposal since high school.

“It’s tough, because if you don’t know what you’re looking at, you’re not going to make the right adjustments,” said Snow, a junior. “I’ve always felt that I know my swing more than anyone else. I always rely on myself, but if I’m struggling a lot my coaches will let me know and we’ll figure it out. You never want to hear from a coach because that’s when you know you’re not doing too well.”

Greenspan said: “From a developmental standpoint, for them to have access to it 24 hours a day whenever they want to pull it up, I think, is neat. And then to use it from our side as a teaching tool, not just the swing stuff but the pitch-track stuff, I think it will be helpful to enforce our philosophy. Show them some hard data.”

Abe Ruiz, a former ASU baseball player, is in his first full season as the program’s video coordinator. The video system is his baby and a vast improvement from the team’s previous video review methods.

“What we’d been doing in the past is going out there with iPhones, iPads and just videoing them in,” Ruiz said. “They’d email them to me, and I’d upload them onto a Google Drive. All of our stuff from the fall is just on a drive there, and it’s not as cleanly cut or as high-quality as these cameras are.

“Now, I just get the footage and send an email link to everyone in the program and it’s right there.”

Towards the end of last season, the baseball program began negotiating with companies to see which video system was the right fit for them. The Sun Devils went with a Sportsvision PITCH f/x system, which will cost the program $10,000 for its multi-year deal.

“The price was right,” head coach Tracy Smith said. “This is something that we’ve had in the works for a while, but we’re actually just going out to install it now. Took them long enough. This is a top-notch system. The type of stuff they use in the big leagues.”

The plan, Smith said, is for all schools in the Pacific-12 Conference to have a video system. Cal was the first program in the conference to have one, and ASU is the second. Stanford is said to be in negotiations to become the third.

The Pac-12 Network will have access to the cameras for its telecasts. The cameras could help the network build a strike-zone graphic and create a more professional-type atmosphere.

Cameras aren’t eligible to win Pac-12 Coach of the Year. Smith just might if the new technology serves its intended purpose.