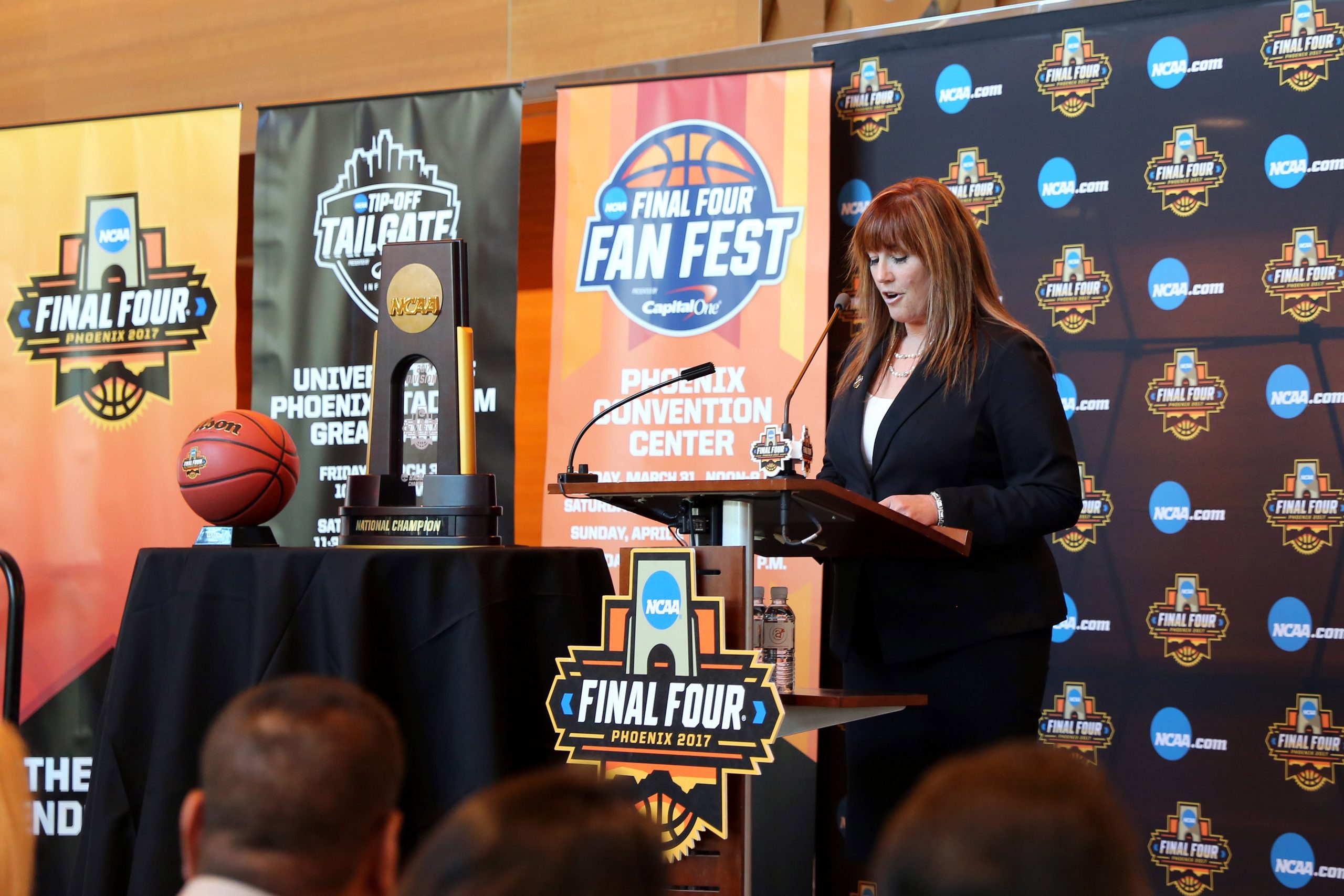 However, she took a risk by leaving ASU in September 2015 to organize this year’s NCAA Final Four, which will take place at University of Phoenix Stadium in Glendale. The NCAA’s annual basketball extravaganza begins with two semifinal games on April 1 and concludes with the championship game on April 3.

Rogers took the job knowing she would not return to ASU for a variety of reasons. One is she wanted the freedom to live where she chooses after the event. Her youngest child is graduating from high school this year.

Abruptly leaving a lengthy career may seem odd, but in an interview in her downtown Phoenix office, Rogers sounded confident about doing so.

“I thought it was a once-in-a-lifetime opportunity, something I may never have the opportunity to do again,” Rogers said. “To be able to run this event the first time that it’s in Arizona . . . was just too intriguing and unique for me to not move over into this capacity.”

Although entrenched in college basketball, Rogers gained inspiration for this task while training for a marathon. She felt intimidated by how far 26 miles was. That led her to focus on one mile at a time.

“You’re not running the whole race at once, you’ve got a game plan and you’ve got to execute that game plan,” Rogers, 52, said. “That has gotten me through a lot of nights of waking up and you start to think of things and you can’t turn your mind off.”

This is not Rogers’ first experience with a Final Four bid. She became involved in 2006 when ASU created a group to form a bid. It failed, but the committee tried again in the next cycle, and the NCAA awarded Phoenix its first Final Four.

Rogers kept one reminder from the failed bid: a story about it from The Arizona Republic. It sits on the bookshelf in her office.

She knew the successful bid meant leaving ASU and the relationships formed with coaches and student-athletes. But as the longest-standing member of Phoenix’s Final Four quest, she could not envision anyone else directing the event. A search committee selected her to be the executive director.

“I have so much respect for the team that we work with from the NCAA,” Rogers said. “It was an opportunity to kind of grow and develop my skill set . . . you start to think about the opportunities that you have to learn from other people.”

JoAn Scott, the NCAA’s managing director for men’s basketball championships, said Rogers’ background made her a good fit to work with the NCAA.

Susan Baughman led the Indiana Sports Corp‘s organizing committee for the 2015 Final Four. She said efficient communication with the NCAA is a crucial skill for executive directors like Rogers.

“I think trying to figure out what your local role is versus what the NCAA handles is important,” Baughman said in a telephone interview. “And once you do that, then figuring out how to best execute your role as a city is the next step.”

Rogers heads an organizing committee with seven full-time members. They’re all under pressure, especially as the Final Four nears. But Kyle Hedstrom, the committee’s director of external relations, said Rogers’ interest in the members’ personal lives helps relax them. Rogers often asks about his baby daughter.

Rogers, her husband, and their two kids live in South Mountain, a Phoenix suburb. Down the street from their house sits an old market where horses are tied up in the street.

“We live in one of the largest cities in the United States, and yet I have a cotton field on one side and a rustic market on the other that farmers ride their horses up to every day,” Rogers said. “It’s a community we feel good about, and we’re proud to live here and of what it stands for.”

Rogers said her possibilities after the Final Four cross her mind about once about a month. Otherwise, she is too occupied with the event. She hopes Phoenix can host another Final Four.

“You’re really the guardians of this for a year,” Rogers said. “This isn’t our event, it’s the NCAA’s event, and you’re the guardian of it, making sure you treat it with a lot of TLC and then you pass it on to the next city.”