The Navajo Tribal Utility Authority has installed solar systems at more than 200 homes on the reservation. (Photo by Katrin Mehler/Cronkite News)

She uses an ice chest to help perishable foods last longer, makes trips to a local store several times a week and dries meat to preserve it.

Electricians from the Navajo Tribal Utility Authority recently installed an off-grid solar system and small wind turbine at her home. On Nov. 3, the workers turned on a lightbulb in the 88-year-old’s kitchen for the first time.

Tourists occasionally visit the two traditional Navajo homes, called hogans, on her property near the Arizona/Utah border. During one visit, someone showed her some portable solar-powered lights – and that sparked her interest in using solar for electricity.

She hopes the solar system will generate enough energy to power a refrigerator.

“I am old and tired and exhausted,” she said through a translator. “I requested a solar energy system so I can have refrigerated food.”

Salazar’s home is one of thousands on the Navajo Nation that aren’t connected to the grid. The most recent comprehensive study, done by the Energy Information Administration in 2000 and based on data from the 1990 U.S. Census, found that there were about 18,000 homes without power – about one-third of those on the reservation.

Navajo residents and leaders say solar power is not the only solution to the energy problem on the reservation, but it is a step towards a more sustainable future.

The off-grid units that the utility authority installs cost less than half of the $35,000 to $50,000 it could cost to extend the grid lines by one mile, but they provide a limited amount of power. To date, the utility has installed more than 200 units at customers’ homes.

Residents with off-grid solar find that they need to carefully manage their electricity use to avoid draining the system’s batteries. Repeatedly draining the batteries can cause them to wear out faster, said Mark Sorensen, the cofounder and director of an off-grid school near the Navajo reservation. 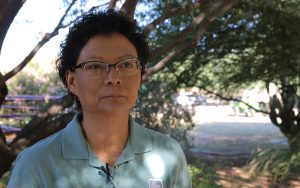 Sandra Begay grew up in Gallup, New Mexico, and often visited family who lived on the Navajo reservation. (Photo by Courtney Columbus/Cronkite News)

“The younger the people, the more electricity they use,” said Sandra Begay, an engineer with Sandia National Laboratories in Albuquerque, New Mexico. “What I’ve heard about and what I’ve observed is that if there’s a grandma, and her grandkids come for the weekend and visit her, they tend to drain the batteries on these off-grid units very quickly.”

Thomas Walker Jr., board member of a local school powered entirely by wind and solar energy, said the off-grid systems have their limits. Household items such as blenders and curling irons can be used for just a few minutes, and Walker’s family avoids buying lightbulbs that are higher than 60 watts. 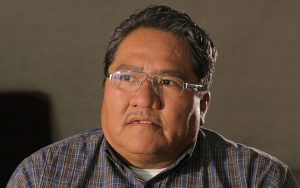 Thomas Walker said about one third of his community, Bird Springs, lacks access to electricity. (Photo by Courtney Columbus/Cronkite News)

“Just last week, we had several cloudy days, consecutive days where it was cloudy, and the batteries that store our energy ran low, and we didn’t have electricity for a couple of days,” Walker said. “So we had to use propane lamps for lighting.”

Bennie Black, a tribal electrician who lives outside of Kayenta in the Navajo Nation, had an approximately 1-kilowatt solar system installed next to his family’s home about five years ago. From his driveway, he can see grid lines in the distance, but they don’t connect to his house.

A battery meter, called an equalizer, mounted on a wall in his house displays how much charge remains in the batteries.

His system enables him to power a refrigerator, where he can store his daughter’s medicine, which needs to be kept cool. The solar panels provide enough energy for him to leave the fridge on during the day, and he unplugs it at night to reduce his energy use.

The capacity of the off-grid system also affects other household decisions. He said he chose his TV based on how much electricity it would use – allowing his children to watch one or two shows at night before he turns it off.

The lack of access to electricity on the reservation has deep roots in history, dating back to the Rural Electrification Act of 1935. As the electrical grid spread across the U.S., it skipped over parts of the Navajo Nation – a rural area slightly larger than the state of West Virginia. The reservation stretches across parts of Arizona, New Mexico and Utah.

The Navajo Nation is the most heavily affected by the electrification gap, but other Native American reservations also face this problem, said Douglas MacCourt, a senior policy advisor for the Office of Indian Energy. Since the Energy Information Administration’s study, he said progress has been made but it’s likely there are still about 100,000 people – 35,000 households or more – without power.

“The cost, particularly in the west and in Alaska, of stringing power lines between remote residential homes in Indian country is so high. The tribal utilities and the non-tribal utilities have a huge backlog of unelectrified homes that they can never pencil out economically,” MacCourt said. “Residential locations in particular are just so spread out that you may have 1, 5, 10 miles between individual houses and hogans.”

Despite the many houses on the reservation that don’t have electricity, power plants on and near the reservation send electricity to metropolitan areas throughout the southwestern U.S. – causing environmental activist Jihan Gearon to call the Navajo Nation “the battery of the Southwest.”

“All of this was intentional in order to take the resources from our region and create places like Los Angeles, Las Vegas, Phoenix and Tucson,” Gearon said.

The Energy Information Administration’s 2000 study noted the discrepancy between the power generated on the reservation and many residents’ lack of electricity.

Fossil-fueled energy on the Navajo Nation

She sees solar power as a more environmentally friendly form of energy that doesn’t come with the environmental costs of mining and power plants.

The Navajo Nation has had a complex relationship with energy generation from fossil fuels for decades. Coal mines and power plants provide jobs, but they also contribute to air pollution.

The U.S. Energy Information Administration identified the Kayenta mine operated by Peabody Western Coal Co. as the largest in Arizona and the 25th largest in the country. The mine produced 6.8 million tons of coal in 2015, according to a report by the agency. 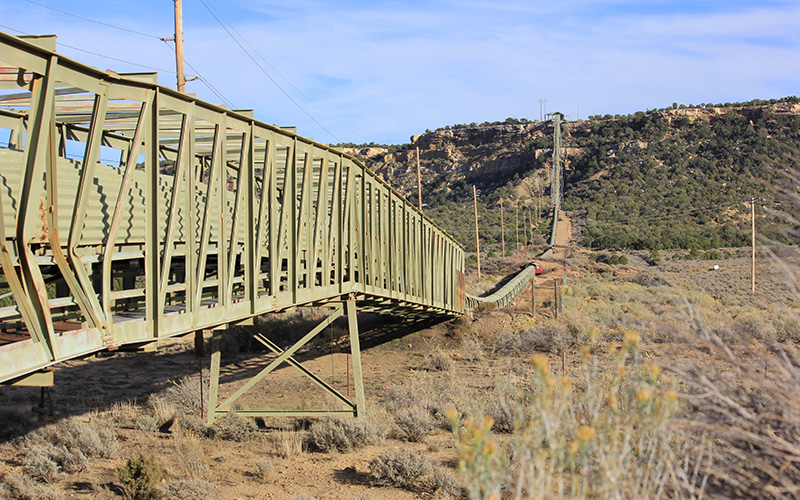 Coal mined on the reservation fuels the Navajo Generating Station in Page, the largest power plant in the West. Pollution from this plant has long affected air quality.

In 2014, the Environmental Protection Agency capped the level of nitrogen oxides the Navajo Generating Station could emit. Its emissions had impacted visibility at 11 national parks and wilderness areas. The cap reduced the plant’s nitrogen oxide emissions by 80 percent from their previous levels, according to the EPA.

Renewable energy expert and Arizona State University professor Martin Pasqualetti said he has been taking his classes to the Navajo Nation every year since 1978. They go to the uranium mill, to coal mines and to a power plant on the reservation.

“There was a very conflicted sense among the people that live there as to having non-Indians exploit the resources that were there,” Pasqualetti said. “I always knew that the Navajo were not getting a good deal. It was reinforced by my visits.”

Power generation continues to be an important source of jobs for Navajo Nation residents.

If the Kayenta Mine and the Navajo Generating Station continue operating from 2020 until 2044, they will contribute an estimated $13 billion to the Navajo Nation’s economy, according to a 2012 Arizona State University study commissioned by the Salt River Project.

Adding to the complexity, the tribe now owns one of the coal mines on the reservation. In 2013, it bought the Navajo Mine in New Mexico for $85 million, according to the Indian Country Media Network.

Coal also helps heat some Navajo Nation homes in the winter. Coal mines on the reservation give free coal to residents who live near mines and who often don’t have access to natural gas for heating.

Bennie Black has a coal-burning stove in his living room and a bucket of coal sitting outside his door. His off-grid solar system wouldn’t generate enough energy to power a furnace, he said.

Solar in the future

Research indicates it’s possible for solar power to expand on the reservation.

In a study published in 2016, Pasqualetti found the Navajo Nation has “the greatest untapped renewable energy resources in the country.” He calculated that the reservation’s potential to generate solar power is 100 times that of the installed solar power in California, the leading state.

And solar is becoming more and more affordable as the costs of the technology decrease, MacCourt said.

The Kayenta district of the tribal utility authority plans to install about 10 solar units at customers’ homes this year, and a project is underway to build a $64 million utility-scale solar plant in the area, according to the Department of Energy.