SCOTTSDALE – It has been 25 years since PGA great Phil Mickelson graduated from Arizona State, but his legacy has only expanded — especially for the latest generation of Sun Devil golfers.

For Nicolo Galletti, a senior on the men’s team this year, playing for a program that Mickelson put on the map was a huge reason he came to Tempe.

“When I was being recruited, I was trying to follow the legacy of Phil and follow his footsteps,” Galletti said. “I’m left-handed, like Phil, so he was always my idol growing up.

“I try to play my game like him, I would say. He’s a master at the short game, and that’s what I would practice growing up — just hitting all these crazy shots trying to be like Phil.”

The same could be said for junior Tobias Eden.

“I always enjoyed watching Phil and Tiger (Woods) when they were battling,” he said. “Phil especially. His short game is just phenomenal. As a golfer, you’re trying to imitate that.

“The history that ASU men’s golf has, I just want to live up to that. He practiced here back in the day, and now I’m here trying to keep the history going of great golf at ASU.”

Both golfers played under Tim Mickelson, Phil’s younger brother and the former golf coach at Arizona State who is now the agent for another former ASU golfer, Jon Rahm.

Phil Mickelson enjoyed a decorated collegiate career before turning pro in 1992, winning three NCAA individual championships and three Haskins Awards, an annual award honoring the most outstanding collegiate golfer in the United States. He also earned first-team All-America honors four times, only the second college golfer to do it. 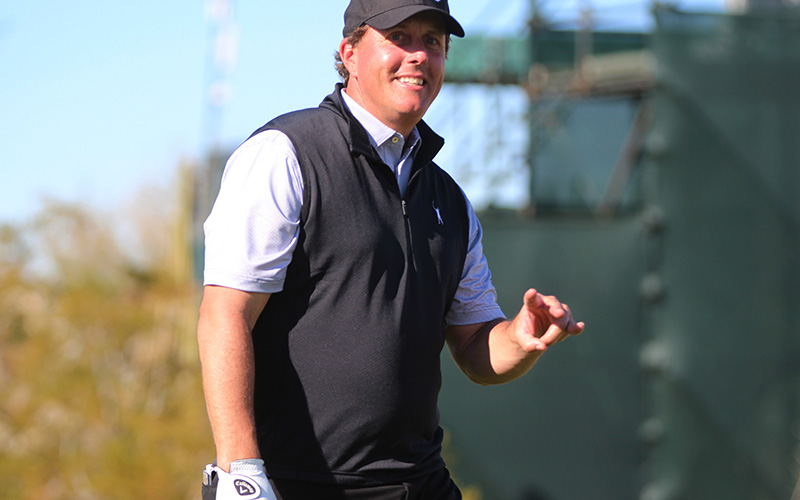 “It’s meant a lot more to me than I can put into words,” Mickelson said of his ASU days. “Those four years of college are such a critical time in your life when you’re transitioning from being dependent to being independent.

“(Then-ASU coach) Steve Loy was so helpful in those four years, getting me ready to come out on tour, ready to play golf, and ready to be on my own as a professional golfer and also as an individual.”

Loy recruited Mickelson out of the San Diego area to play at Arizona State and hasn’t left the golfer’s side since. When Mickelson turned professional in 1992, Loy left ASU after six seasons and has been Mickelson’s agent ever since.

Mickelson said Loy has been his best friend over the last 25 years.

“I can’t put a price on that or how much that means to me,” he said.

With the Waste Management Phoenix Open in town this weekend, the tournament provides Mickelson an opportunity to return to his old stomping grounds and to a tournament he first played as an 18-year-old ASU freshman in 1989.

The TPC Scottsdale is a short drive down the Loop 101 freeway from ASU’s Tempe Campus, making the tournament a sort of annual homecoming for Mickelson, who has won the Phoenix Open three times.

He also is often credited for inspiring the raucous atmosphere around the event’s famous 16th hole. But huge galleries spread out throughout the course on tournament weekend. A record crowd of more than 200,000 attended Saturday’s third round in 2016. 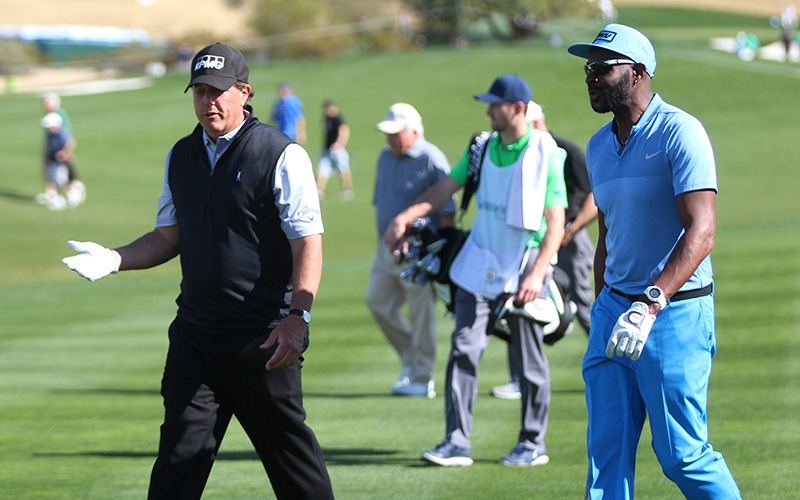 Phil Mickelson and Jerry Rice talk down the fairway during the celebrity pro-am at the Waste Management Phoenix Open. (Photo by Tyler Drake/Cronkite News)

“The thing about this facility is that it’s built to accommodate this type of crowd,” Mickelson said. “It works perfectly here.

“I don’t know if it’s meant to be (like this) every place. I think that if you do it every single week it loses some of its lure and luster. But there’s no reason why other tournaments couldn’t develop what they’ve done here, which is make it the place to be that week and have everybody want to come out and enjoy the experience and have golf be the center of it.”

One thing is certain, no matter how Mickelson plays at the WM Phoenix Open this weekend, chants of “ASU! ASU! ASU!” will fill the air when he emerges from the tunnel on the 16th hole.

“I love playing this event,” Mickelson said. “I’m amazed at how the (sponsoring) Thunderbirds have done such a great a job of making this a great experience for everybody.

“Throughout the course you have all these people, more than we ever have. It’s a very well-thought-through golf tournament. It’s fun to be a part of it.”