PHOENIX – A recent state audit found the state’s Vocational Rehabilitation program, which helps thousands of people with physical or mental disabilities prepare for and find work, spends significantly more per person on average than similar programs in other states – about 2.5 times the amount.

And, the audit says, Arizona isn’t as successful with its participants. It pointed out that if the program became more efficient, it could serve more people – and possibly help more of the 2,800 people on its waiting list.

Officials measure rehabilitation by one factor: getting a job after completing the program.

Auditors suggested the program, which is run by the Department of Economic Security, add more oversight, guidance and training. Program officials said they’re working with the state to make improvements, but they defended the work. 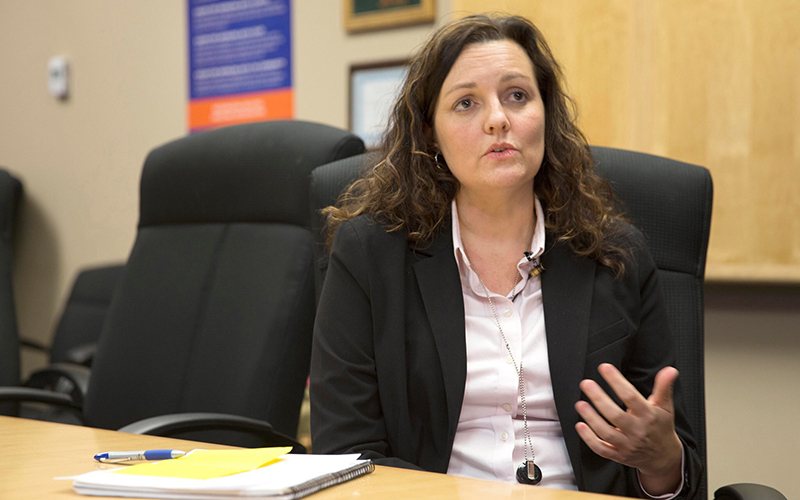 “We do have work to do, and we recognize that,” said Kristen Mackey, the administrator of the state’s Vocational Rehabilitation program. (Photo by Johanna Huckeba/Cronkite News)

“We do have work to do, and we recognize that,” said Kristen Mackey, the program’s administrator. “We’re still doing really good work out in the field, and we don’t want that to be minimized and overlooked with this information that’s coming out.”

The program, mostly funded by federal dollars, served about 1,500 people last year. It provides many services, including providing equipment, such as hearing aids or prosthetic limbs, and educating clients for their specific line of work.

A doctor referred Darrin Warrilow, a former electrician who lost his eyesight in a chemical accident, to the program. Warrilow now owns Kahala Coffee Traders at the state Capitol.

He said that with the help of the program, he not only got back into the workforce, but he feels that he’s overcome his disability. Workers taught Warrilow how to use a cane and a computer. They also supplied him with his restaurant space and provided him with a business consultant.

“It’s a wonderful opportunity to have a program like this for blind people to be out and being able to run their own business,” Warrilow said. “Blindness is not a disability to me, it’s an inconvenience. But I’ve learned to adapt to live this way. … I can still run my own business and make myself a decent salary so I can provide for my family.”

Overall, the program’s goal is to get people not only working, but working in competitive job environments alongside people without disabilities.

“So we are making some gains and some improvements,” Mackey said. “And I want to reiterate that the mission is to help individuals with disabilities become employed and independent, and that’s really what the goal is.”

But helping people find work comes at a cost.

The program is expected to cost about $140 million in fiscal 2017, according to the audit. About 78 percent of those funds come from federal grant money.

To measure its effectiveness, auditors analyzed 32 comparable agencies in other states and territories and found Arizona, on average per case, outspent them. Guam had the next-highest average cost per rehabilitation of about $13,100, according to the audit.

While some of the services, such as assessments and job-related services, were expensive, vocational training was by far the most expensive service at about $28.1 million.

Dot Reinhard, one of the auditors who took part in the audit, said the main issue was a lack of guidance. She said the program needs more oversight to improve efficiency.

“For example, we recommended they look into lowering the authorization levels for clients, improving guidance for their staff who work with the clients,” Reinhard said. “In addition, we recommended they develop ways for monitoring progress in terms of cost and how long clients are in the program.”

The report also indicated that many people aren’t getting help. Currently, the program only serves individuals with the most significant disabilities. As of Dec. 1, the program had about 2,800 lower-priority clients on the waitlist to enter the program.

Although Mackey said the program welcomed the advice, and they plan on implementing changes based on the suggestions, she said some of the measurements used are no longer a valid measure of success.

For example, the audit analyzed the number of clients who “exited” the program without obtaining employment – about 76 percent in federal fiscal years 2014 and 2015. But Mackey said those numbers can include clients who died, left Arizona or simply chose not to participate.

Mackey said the Workforce Innovation and Opportunity Act, which passed in 2014, acknowledges that the current measure of success is skewed and will be fazed out and replaced with skill and education-focused evaluations.

Despite having higher-than average costs compared to other programs, Mackey said the program would require even more funding to improve.

The program’s budget has grown, including a more than $2 million increase in the fiscal 2017 budget to deal with the waiting list.

“We did receive more funds, and that is partially contributing to the ability to serve those extra individuals,” Mackey said.

While the program needs to improve, Mackey said the work they do is important. In the past, the disabled were counted out of the workforce, but the program helps set a different mindset.

“For a very long time, the culture has been if you have a disability and it’s significant in any sort, you’re almost relegated to the terms of staying in a day program and not working,” she said. “As a nation, we’re moving away from that type of promotion and moving into employment first.”