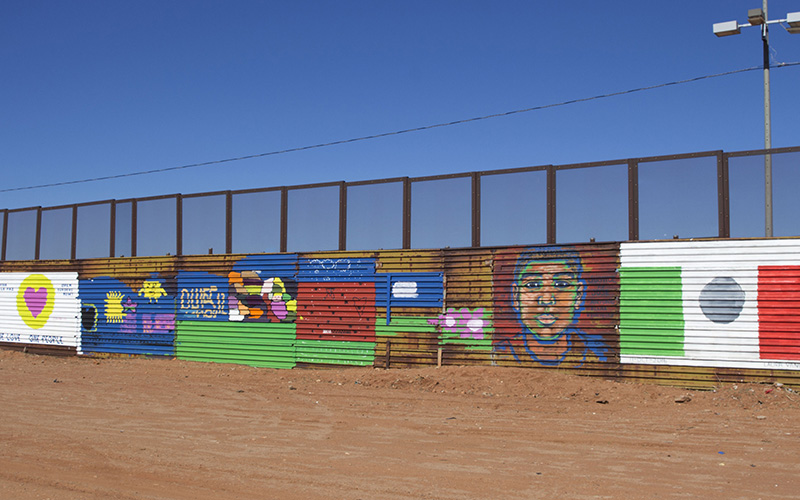 Children painted a mile long section of the border fence in Naco, Sonora, Mexico with images and messages of peace and love. (Photo by Rachael Bouley/Cronkite News)

A child at a farewell party for a mural on the border fence in Naco, Sonora. Construction crews will demolish the fence to make way for a new barrier. (Photo by Charlene Santiago/Cronkite News) 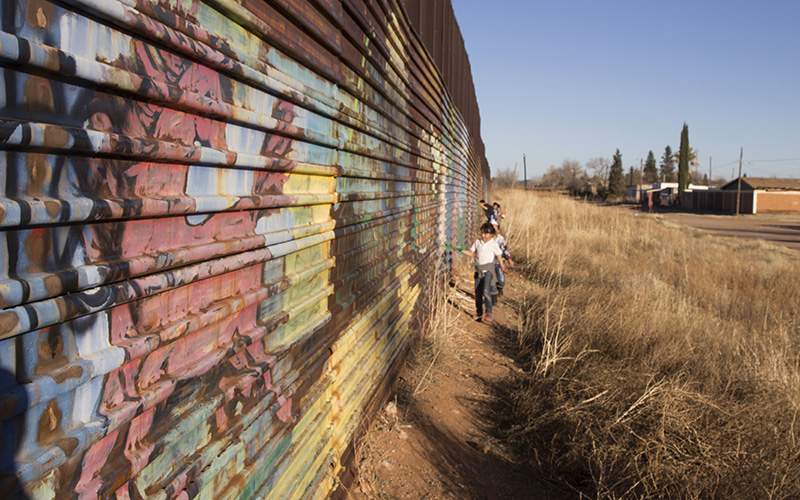 Children run along a mural painted on the border fence in Naco, Sonora. The fence is being torn down and replaced by a new structure. (Photo by Rachael Bouley/Cronkite News) 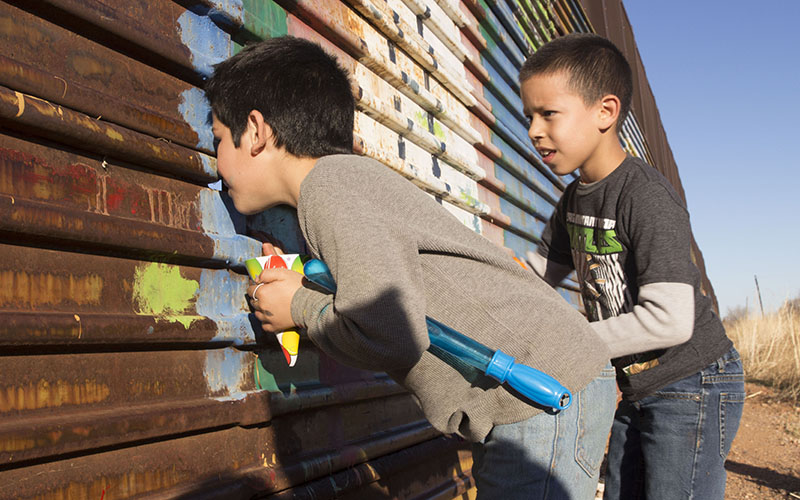 Children in Naco, Sonora, Mexico peek through a hole in the border fence at Border Patrol agents on the other side. (Photo by Rachael Bouley/Cronkite News) 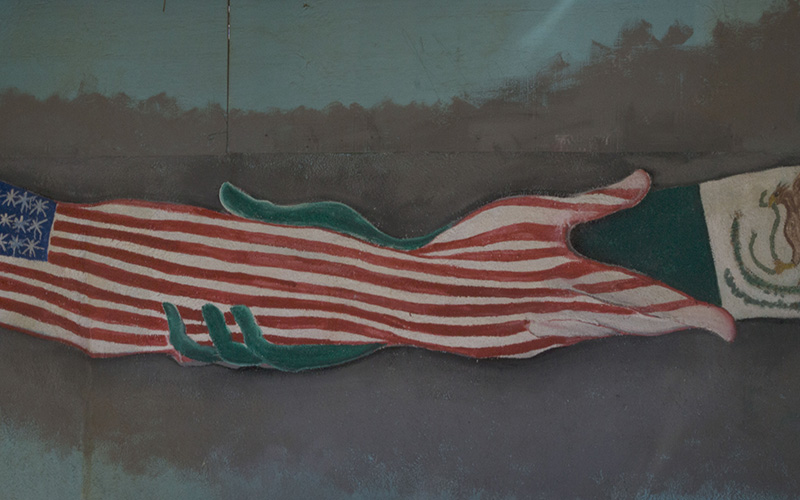 A painting on the exterior of Studio Mariposa represents the relationship between the United States and Mexico in Naco, Sonora, Mexico. (Photo by Rachael Bouley/Cronkite News) 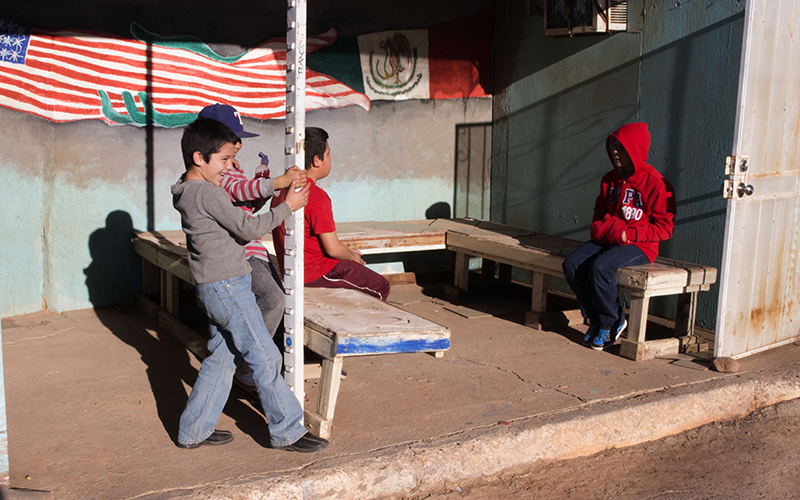 Martin Romero Rodriguez and his friends play outside of Studio Mariposa in Naco, Sonora, Mexico. (Photo by Rachael Bouley/Cronkite News) 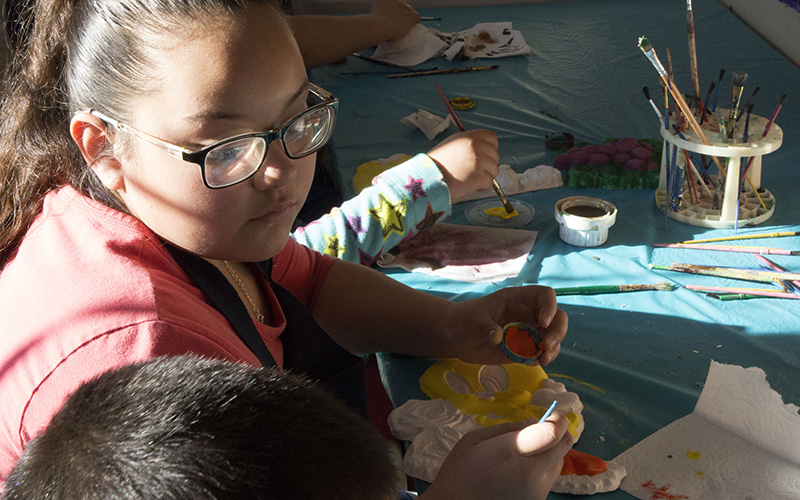 Children who painted a mural on the border fence will now have a new place to create art. Studio Mariposa recently opened in Naco, Sonora. (Photo by Rachael Bouley-Cronkite News) 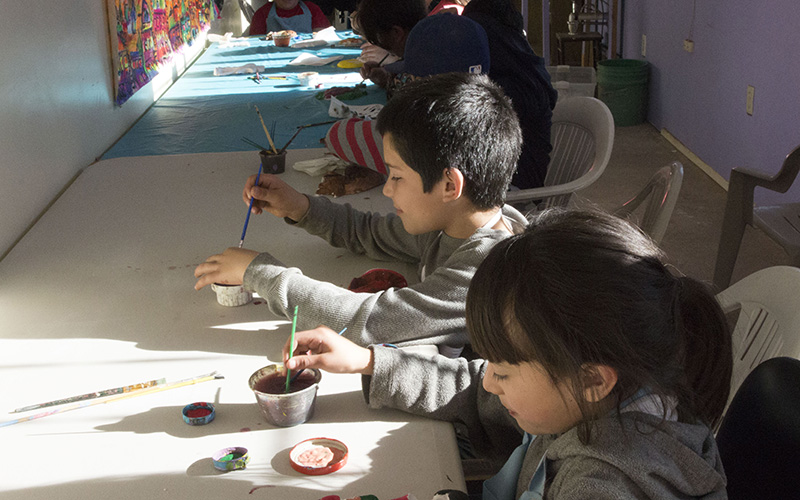 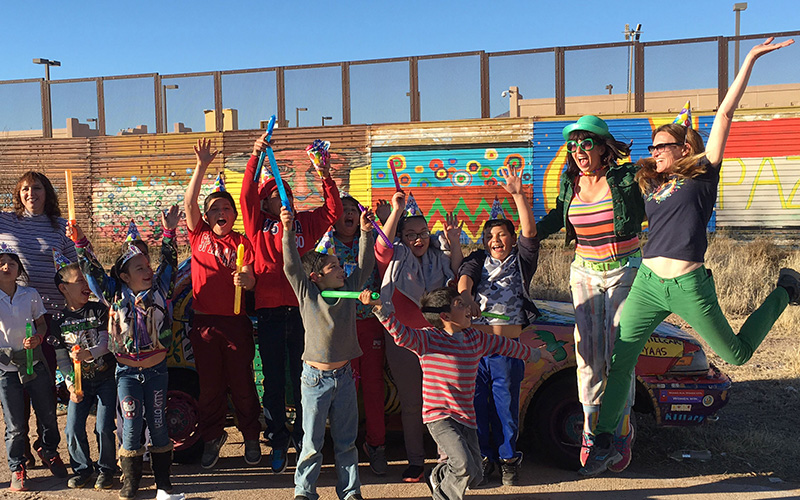 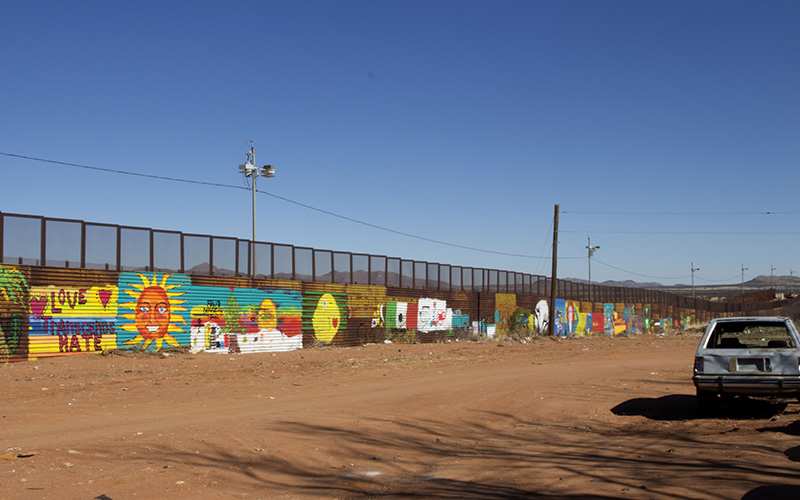 The painted portion of the border fence, soon to be replaced by a new stucture, stretches for one mile along the border of the United States and Naco, Sonora, Mexico. (Photo by Rachael Bouley/Cronkite News)

NACO,SONORA – Children who painted a mural on a section of the border fence in Mexico gathered to take a final look at their artwork before the structure is torn down to make way for a new border barrier.

For the past six years kids working with border artists have painted a mile long mural on the structure. They call themselves The Border Bedazzles and on a recent afternoon, the group held a small fare-well party, ate cupcakes and snapped selfies at the fence.

Many said “Adios,” goodbye in Spanish as they smiled for the camera. “I love you very much,” said Martin Romero Rodriguez, one of the young artists.

The children, between the ages of 6 and 10, are mostly from Mexico but kids from Arizona also helped paint the fence. The art project has attracted visitors from the U.S. and other countries who wanted to contribute to the mural.

“Living right near the border and being an artist, I saw the border as a canvas and an opportunity to work with the kids, ” said Gretchen Baer founder of The Border Bedazzlers and a Bisbee, Arizona resident. 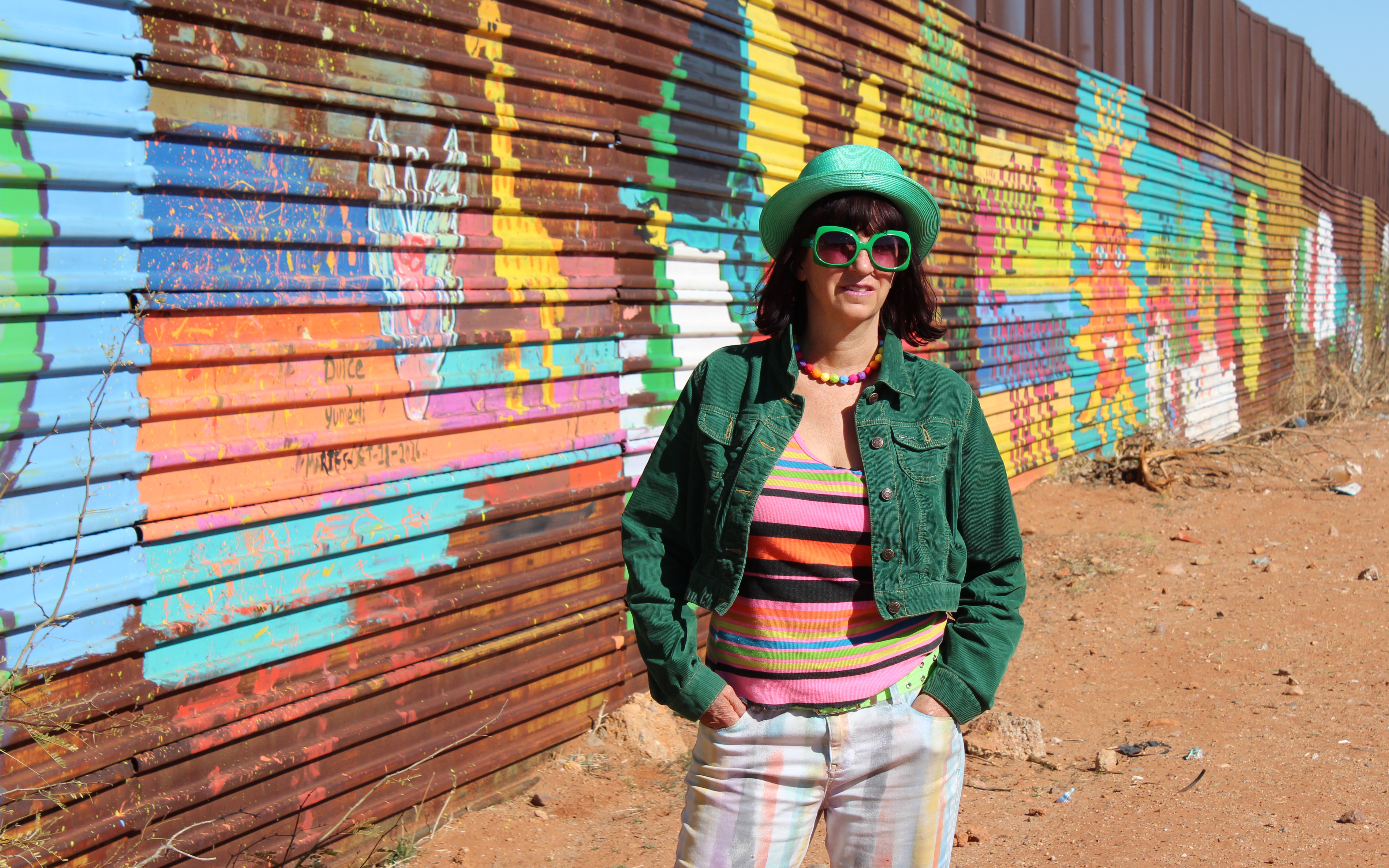 Gretchen Baer, a Bisbee, Arizona artist created The Border Bedazzlers, which used the border fence into a canvas for art by children. (Photo by Charlene Santiago/Cronkite News)

“If you look at the panels, you understand their experience,” said Nancy Parana, director of the museum in Naco, Mexico and a collaborator with The Border Bedazzlers.

The mural includes various brightly colored images and messages including “Love transcends hate” and “Somos un mundo,” (We are one world) in Spanish. Another section features the face of Jose Antonio Elena Rodriguez, a 16 year old resident of Nogales who was shot and killed when a Border Patrol agent fired into Mexico in 2012.

“Since we were artists from both countries we decided to make the mural on the border wall,” said Borquez. “The fence has been here a long time but we will continue to be friends,” she said.

“The fence is going to come down any day now,” said Michael Hyatt Patrol Agent in Charge of the Brian A. Terry Border Patrol Station located a few miles from Naco Port of Entry.

The replacement structure is not part of the border wall President Trump promised to build but instead an upgrade planned four years ago. Construction on a 7.5 mile portion fence between Naco, Arizona and Naco, Mexico started in January. The new structure will be an 18-foot high bollard fence similar to the fence dividing Douglas, Arizona and Agua Prieta, Sonora.

The new fence will allow Border Patrol Agents to see into Mexico and allow for “safer and more effective border security,” according to a media release from U.S. Customs Border Protection

“I don’t know why they’re making another fence,” said Jose Luis Arellano, a mechanic in Naco, Mexico. He can see the section of fence where the mural is painted from his backyard. He’s lived near the border for 25 years. “I used to play baseball here with my son before there was any type of fence. 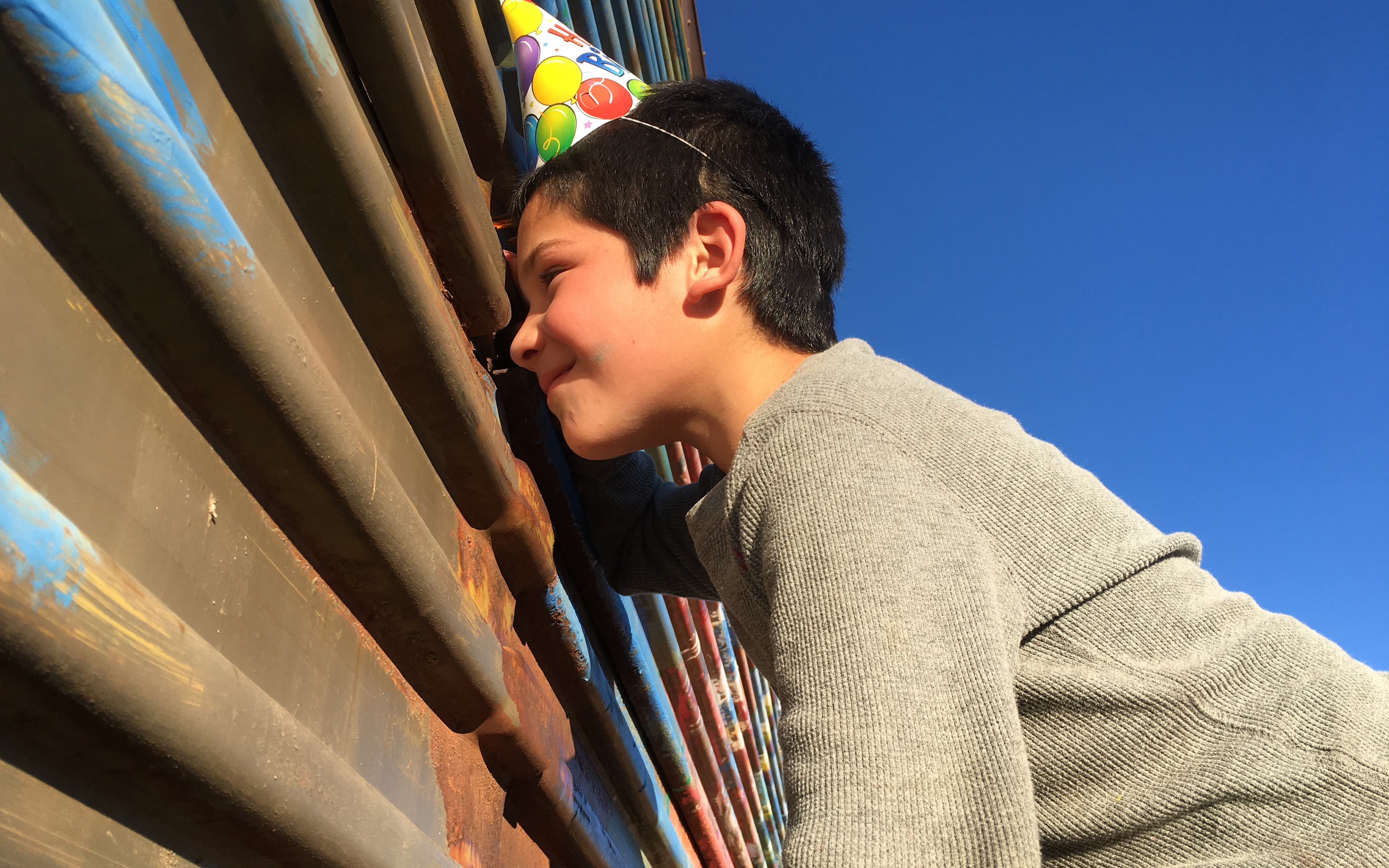 Martin Romero Rodriguez, a young artist with Border Bedazzlers, peeks through a hole in the border fence. He and other kids in Naco, Sonora gathered recently for a party to bid farewell to the mural they painted on the barrier. (Photo by Charlene Santiago/Cronkite News)

As a group played by the fence one of the kids said in Spanish, “I want to go to gringoland.” They took turns peeking through a hole in the section where the mural was painted. “Do you want to be my friend?,” several of them asked Border Patrol agents who were on the other side.

After the fence is gone, the Border Bedazzlers will continue their art work at Studio Mariposa, a small, brightly painted turquoise blue building located next to The Naco Port of Entry.

“Studio Mariposa is going to be an exciting bridge between the U.S. and Mexico,” said Baer.

Romero Rodriguez visited Studio Mariposa for the first time the day he said farewell to the mural. “I think it’s wonderful and I’m going to come every Tuesday,” said the budding artist.

Baer received approximately $1,000 in paint and art supply donations to support the children’s work on the fence. She said she will count on donations as well as out-of-pocket investments to fund the new art studio. The studio does not have electricity yet but children meet to paint during the day time.

“They need to know that they’re important and that we see them,” she said. “They shouldn’t feel like anything but the greatest kids in the world.”