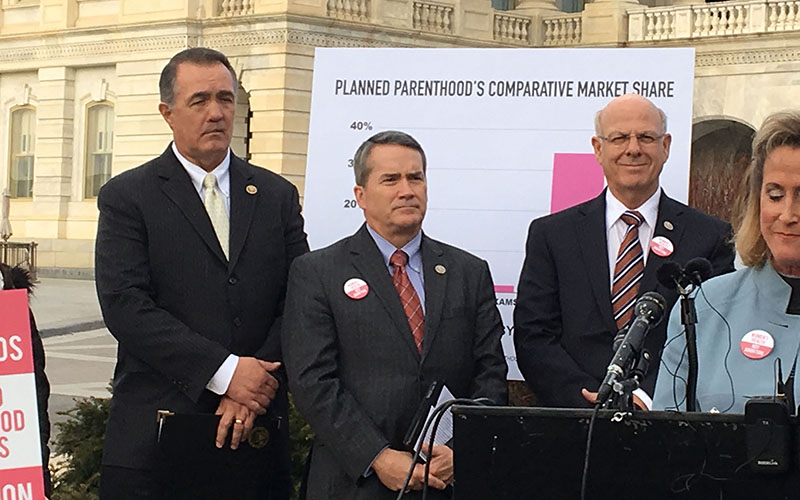 Rep. Trent Franks, R-Glendale, left, and other pro-life members of Congress at a Capitol Hill news conference where they renewed calls to defund Planned Parenthood. (Photo by Kendra Penningroth/Cronkite News) 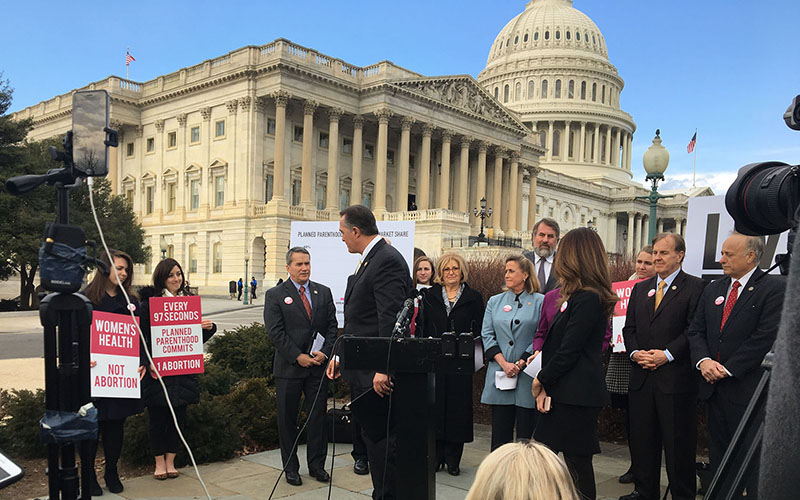 House members at a Capitol Hill event organized by Live Action, a pro-life advocacy group charging that Planned Parenthood does not offer as much prenatal care as it claims. (Photo by Kendra Penningroth/Cronkite News)

WASHINGTON – Pro-life lawmakers renewed demands Thursday to strip funding from Planned Parenthood, pointing to new charges from a pro-life group that said the health organization does not provide the prenatal care its defenders claim.

The event outside the Capitol was organized by Live Action, a nonprofit anti-abortion group that said it contacted 97 Planned Parenthood clinics around the country seeking prenatal care and was turned away at all but a handful.

Their report, released last month, is proof of the “abortion-first” mentality of Planned Parenthood, the lawmakers said.

“I hope that the sands of time blow over that Capitol dome before we ever give one more dime of taxpayer dollars to this insidious, deceptive, evil enterprise called Planned Parenthood,” said Rep. Trent Franks, R-Glendale, one of the lawmakers on hand Thursday.

Planned Parenthood Arizona officials challenged the Live Action claims, which they called just another instance of videos spliced together out of context to make the organization look bad.

“We’re doing more than anyone to prevent abortions,” said Liggett, pointing to more than a century in which Planned Parenthood has provided health care and family planning resources that aim “to respect and honor women’s choices.”

But Live Action released videos in January that founder Lila Rose said expose “the lack of health care services, the misrepresentation and misleading of taxpayers by the biggest abortion provider in this country, Planned Parenthood, showing their abortion-first mentality.”

In one of those videos, Live Action said it called 97 Planned Parenthood facilities to inquire about prenatal care and was told by workers at 92 of them that the organization “does not offer” prenatal care services.

“They talk about providing prenatal care, which they don’t,” Franks said of Planned Parenthood. “They’re an abortion corporation, and if people really understood what they did, they would realize that it is morally and in every way imaginable, wrong, to force taxpayers to subsidize that deceptive organization.”

Rose said the Planned Parenthood gets about a half-billion dollars in federal funding every year, money she said should be routed to “more worthy women’s health care providers.”

But Liggett said services vary from clinic to clinic among the hundreds of Planned Parenthood facilities across the country. As for its federal funding, she said that it is not a blank check but is reimbursement using Medicaid or Title X funds for services the organization has already provided to patients.

“Medicaid patients come to us, we provide services and then we get paid,” Liggett said.

By law, Title X funds cannot be used to reimburse abortions and Medicaid funds can only be used for an abortion in what Liggett called “extremely narrow” circumstances, as in the case of rape or incest.

She said that in 20 counties in the U.S., Planned Parenthood is the only provider of prenatal care. Cutting its funding, she said, would backfire on abortion opponents.