PHOENIX — A statue of a Yaqui, wearing traditional garb and performing a ceremonial dance, graces the entrance to the Pascua Yaqui Tribal Complex in Guadalupe, where Vice-Mayor Anita Cota and Councilman Ricardo Vital work.

The statue is symbolic of the unique nature of Guadalupe, a small town bursting at the seams with a cultural blending of Americans, Mexicans and members of the Pascua Yaqui tribe.

The two town leaders, along with recently-elected Mayor Valerie Molina, 38, and Councilwoman Elvira Osuna, frame a new generation of leaders for the town of 6,000 nestled between Interstate 10, Tempe and Chandler. 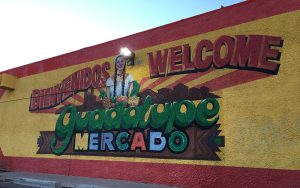 A mural adorns the side of Guadaupe’s Mercado, along the town’s main street, Avenida Del Yaqui. Residents hang around this mural during the day, but Mayor Valerie Molina is hoping to bring business back to the town and attract shoppers from outside Guadalupe. (Photo by Diego Mendoza-Moyers/Cronkite News)

What makes this council different – and to them, more likely to succeed – is their close connection with the Yaqui tribe. All four are members of the tribe, and six of seven council seats are held by Yaquis.

“There’s a lot of things the town needs, and the tribe is our No. 1 partner,” Molina said.

The four ran together and were elected in November. They now face the task of revitalizing the town of Guadalupe after years of civil and economic stagnation.

“We’re not so much focusing on the negative part of our community; but I think as a whole, the council now wants to highlight the gifts that are within our community. I think that’s important for people to see,” Cota said. “We need to highlight what the [tribal] elders have to offer — the partnerships that we can have with the elders.”

Aside from ethnic and cultural similarities, members like Vital and Molina are younger than the town charter itself. Their goal is to usher in a new era of leadership within Guadalupe.

The council’s youth movement signals a greater use of technology to which councils in years past didn’t have access. It also signals a new mindset that individuals such as Cota, Vital, and Molina — who had no prior experience in politics before becoming mayor — possess. 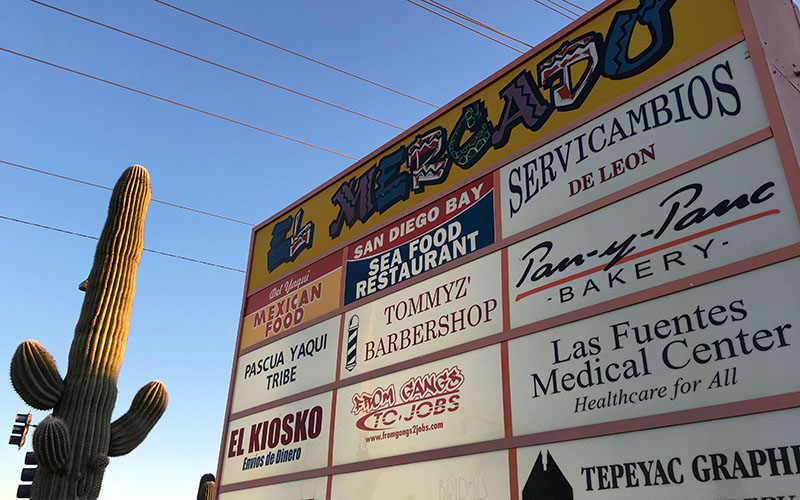 A monument sign stands outside of the central market in Guadalupe, showing which businesses are still open. The number of empty spots highlights the full occupancy the Mercado could, but has yet, to reach. (Photo by Diego Mendoza-Moyers/Cronkite News)

“I’m not thinking about drastic change,” Molina said. “It’s going to be more like, let’s go ahead and introduce a business into to town, or let’s explore the idea of doing things a certain way that are going to help youth or help seniors.”

The new leaders are also focused on taking a more long-term approach to governance, especially pertaining to economic development within the town.

This particularly has to do with the Mercado de Guadalupe, a traditional hacienda-style market that was built in the center of the town. The Mercado is home to restaurants and shops, and is meant to act as a community gathering spot. 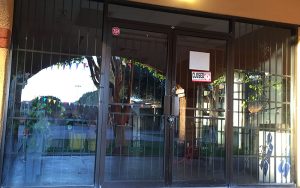 The sun rises on one of several empty store fronts in Guadalupe’s Mercado. Of the 34 suites in the town market, only 14 are occupied — another sign of slow growth within the small, Southeast Valley town. (Photo by Diego Mendoza-Moyers/Cronkite News)

However, retail businesses in the Mercado have had varying degrees of success, at best, over the years, and the space has been heavily underutilized, Vital said.

Of the 34 business spaces in the Mercado, 20 are currently vacant.

“There’s just never been a good market plan for [the Mercado], never been a business plan,” Vital said. “There was no ‘OK, five years from now this is where want to be, 10 years from now this is where we’re going to be.’ We’re 40 years [since the Mercado opened] and we’re still where we were. We need to develop some type of economic plan, some type of sustainability so that when we’re gone, it’s still there, still flourishing.”

One goal Molina said she hopes to accomplish is to work with an outside group to renovate and improve the Mercado, and turn it into a community center. This will help bring in more business and commerce to the town’s centerpiece, Molina said.

Another focus of the council is to make use of empty parcels of land along the main street, Avenida del Yaqui, by putting in new restaurants and making it a “foodie destination.”

“We have enough parcels of land down the street where we can grow and develop,” Molina said. “Maybe that would be the draw for people. Who’s to say we can’t be another foodie district like Gilbert. Gilbert has that main drag where you can go eat anything you want there and have some entertainment as well. Guadalupe is in the right location to be able to be successful.”

Outside of economic and community development, town leaders say preserving and maintaining the unique culture of the town long-term is as important as it’s ever been.

Rafael Armenta, a cultural specialist with the tribe, former councilman and lifelong Guadalupe resident, is optimistic about what a younger council with greater Yaqui influence could mean for the town.

Most important to Armenta, however, is showcasing the unique nature of Guadalupe culture to the rest of the Valley and around the Southwest. 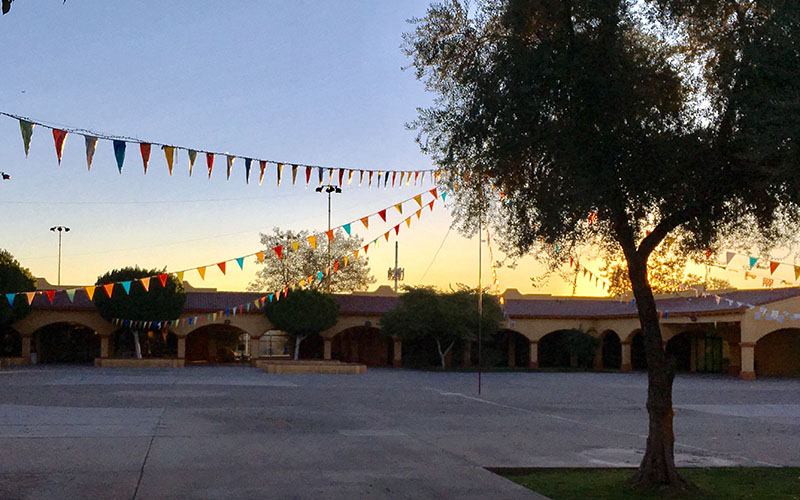 The sun rises over the Mercado in Guadalupe. Most of the retail spaces in this traditional, Mexican-style market are vacant, but one of Mayor Valerie Molina’s goals is to revitalize this town monument. (Photo by Diego Mendoza-Moyers/Cronkite News)

“Our elders, in their teachings, tell us when someone comes over from a different town, to put our best foot forward,” Armenta said. “We want to put forth our best. We have the good and the bad, but we want to put the good out front and showcase our town because we do have these different [cultures] living here.”

“Our programs here are limited as far as what we offer to kids, which then puts them on a path where they could be getting themselves into trouble or doing things they shouldn’t be doing,” Molina said. “I’d like to help prevent that.”

This is particularly important for the council’s goal of lowering crime and improving Guadalupe’s image, Vital said.

“Our town has the capabilities of being something great, and I think we have a good start at that,” Molina said. “We’ve been able to stay here 45 years. We just need a generation that’s going to say, ‘OK, where else can we take our town? What is the next step?’ And I think that’s what this new council wants to do.”