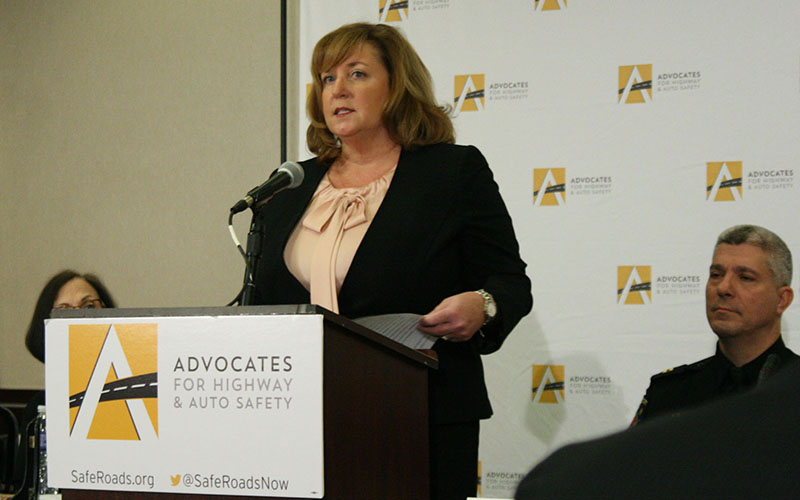 Cathy Chase of the Advocates for Highway and Auto Safety said Arizona was “one of the worst states” for highway safety laws in the annual report card put out by her group. (Photo by Joseph Guzman/Cronkite News) 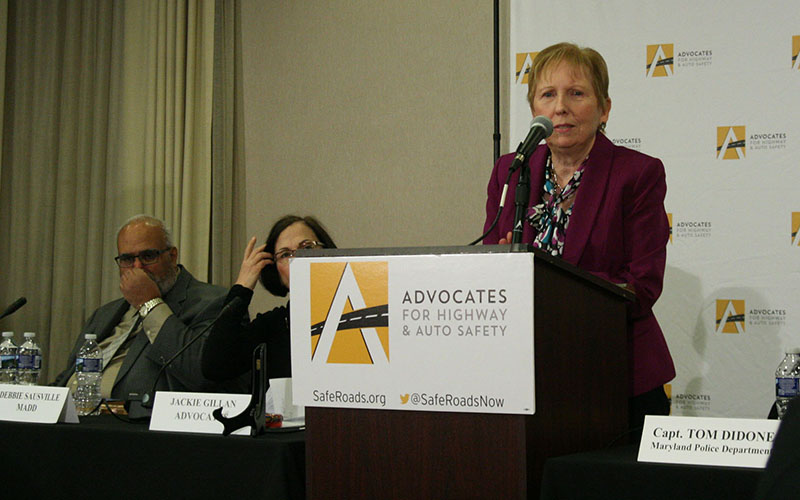 One Arizona official blasted the report on traffic safety laws, but Advocates for Highway and Auto Safety President Jacqueline Gillan said it should be a wakeup call to state lawmakers. (Photo by Joseph Guzman/Cronkite News)

WASHINGTON – Arizona was rated one of the most dangerous states in the nation for drivers and passengers due to its relative lack of highway safety laws, according to a national report card released Tuesday.

The Advocates for Highway and Auto Safety looked at 15 laws it says states should have, everything from drunken to distracted driving measures, and ranked states based on the number they had in place last year. Arizona had just four of the 15, one of just three states with so few.

“Arizona is one the worst states unfortunately,” said Cathy Chase, the vice president for governmental affairs for the highway safety group.

“Arizona is in need of some significant upgrades including an upgrade to its booster seat law for children up to age 8 who are at least 57 inches,” she said. “The age and the height are most effective in protecting children, the seatbelt can cut across their neck otherwise.”

Arizona has four of the 15 laws the Advocates for Highway and Auto Safety recommends, one of the lowest rates in the country. The state:

But one state official criticized the report, saying it overlooks important highway safety laws where Arizona is among the best in the nation.

“They don’t like Arizona and I don’t agree with them on anything they say,” said Alberto Gutier, director of the Governor’s Office of Highway Safety.

Gutier said Arizona has some of the toughest laws in the country for impaired driving, and noted that the report does not incorporate speeding and aggressive driving, areas the state has cracked down on. He also boasted about Arizona’s high ratings from Mothers Against Drunk Driving.

“Arizona was only the fourth state in the union that received five stars from MADD two cycles in a row,” Gutier said. “MADD doesn’t like anybody but they like us.”

The state has not done nearly so well in the highway advocates report card, finishing near the bottom of the rankings for at least five years in the annual Roadmap of State Highway Safety Laws.

Arizona got a “red rating” for its lack of targeted laws. Among the shortcomings cited by the report were Arizona’s lack of a front and rear primary enforcement seat belt law, an all-rider motorcycle helmet law and an all-driver text messaging restriction.

Jacqueline Gillan, president of Advocates for Highway and Auto Safety, said the report is meant to expose deadly gaps in “essential” laws and should serve as a wake-up call for lawmakers.

State Sen. Steve Farley, D-Tucson, said he hopes Arizona will reach a turning point this year when it comes to making roads safer.

Farley said he was the first legislator in the country to call for a ban on texting while driving when he introduced that bill in January 2007 – but Arizona remains one of just two without any sort of ban. Now he believes the ban has a chance of becoming law this year.

“We are a real outlier by not having that law,” Farley said. “It was all because of one person, (former state Senate President) Andy Biggs, who is now in Congress so he can’t block it anymore.

“I think there is a real chance that we can get higher up that list and join the rest of the other states in making our roads safer,” Farley said.

He said hopes to have a floor vote as early as this week on his bill banning phone use behind the wheel by novice drivers. If that goes well, he said, he may push for a statewide ban for all drivers.

Gillan said tougher laws cannot come too soon, pointing to a recent uptick in traffic deaths at the state and national level.

“Almost 900 people died in 2015 on Arizona highways and roadways,” Gillan said. “For a state the size of Arizona, that is a huge fatality toll.

“If 900 people were dying because of some other illness there would be quite an outcry and I assure you that the state legislature would do all they could to save those lives,” she said.