PHOENIX – Reaction across the Valley mirrored national sentiment at protests this past weekend after President Donald Trump’s executive order cracking down on immigrants from seven primarily Muslim countries entering the U.S. caused a whirlwind of confusion at airports here and across the world.

Misunderstanding of the president’s order seemed to create much of the confusion, both from opponents of the ban and its supporters. The order affects travelers and refugees arriving in the U.S. from Iran, Iraq, Libya, Somalis, Sudan, Syria, and Yemen.

On Sunday afternoon, about 700 people stood outside Terminal 4 at Sky Harbor International Airport in unity against the president’s order.

Protesters chanted, sang, and celebrated with a message that no one is alone, and that Phoenix stands with them.

Ruben L. Reyes, Chair and board member for the Arizona Chapter of the American Immigration Lawyers Association, said within 24 hours of the announcement of the executive order, Phoenix responded.

“The administration overstepped its authority,” Reyes said. “They are denying due process. We are here to let you know in Arizona and throughout these United States that you are not alone.”

Reyes said that the U.S. was founded on immigration. He said his organization will continue to work with allies such as the American Civil Liberties Union (ACLU) to unite families and help individuals because “that is the American Dream.”

The protest was organized by the Arizona Chapter of the American Immigration Lawyers Association in response to President Trump’s order that was handed down last Friday.

Immigration lawyer Zayed Al-Sayyed told the crowd that it was an accomplishment in itself to gather the hundreds of people to “fight against the unconstitutionality, the prejudice, the anti-American executive order that was issued.”

“I’m a Muslim, I’m a Palestinian, but first of all, I am an American,” Al-Sayyed said. “To have you all here, fighting the injustice, standing besides your neighbors regardless of religion, regardless of color, regardless of origin is a beautiful thing and this is why America is the greatest. This is why we are America.”

He said that America doesn’t need to be made ‘great again’ because it is already amazing. 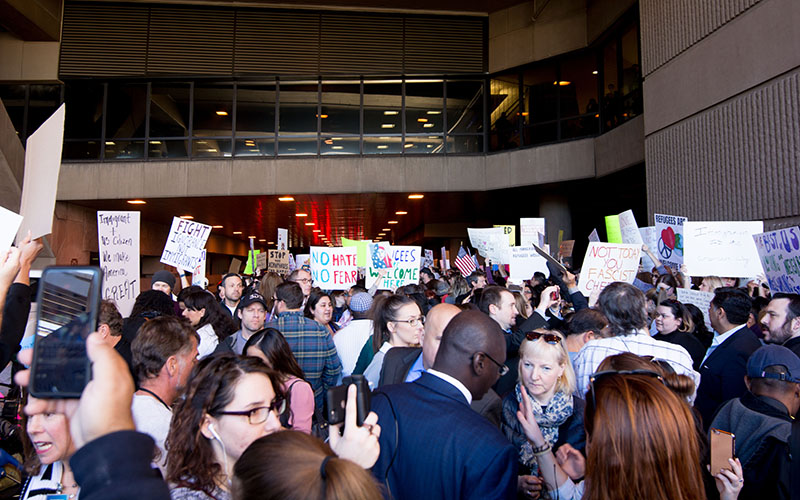 A crowd of about 700 stands outside Sky Harbor International Airport on Sunday, Jan. 29, 2017, as protests broke out at other airports across the U.S. spurred by President Donald Trump’s executive order to ban immigrants from entering the U.S. from seven primarily Muslim countries. (Photo by Ryan Santistevan/Cronkite News.)

Larry Levi Sandigo, Advocacy Chair of the Arizona chapter of the American Immigration Lawyers Association said we are a nation of immigrants.

Congressman Ruben Gallego, D-Ariz., told the crowd on Sunday that everyone protesting the executive order is not the opposition but the resistance.

“We shall fight here, we shall fight in D.C. to make sure (immigrants) have due process,” Gallego said. “Once they can do it to our Muslim brothers and sisters, they will next do it to our Latinos, then they will do it to our gay community then they’ll do it to the poor. We must fight them on every step. We will fight Trump at every step; we need to be the resistance for American values and for the constitution of the U.S.”

Phoenix resident Samantha Nieto, 18, said she showed up because every human should be allowed to come to the U.S.

“I feel like Donald Trump’s campaign was full of hate and fear,” Nieto said. “That’s not what it should be about in this country … It feels good that there are other people who feel the same way.”

Phoenix resident Devon White, 21, said she wanted to attend the protest because she said she believes that no human is illegal.

“This is what America is,” White said. “I’m here for everyone and every person, living being on this planet whatever religion or race, it doesn’t even matter.”

She said the Sky Harbor protest was the third she’s attended in the span of a week.

New York resident Debora Munezek was at Sky Harbor on her way back home. She said the protest is personal to her work as a clinical psychologist and someone who works with international human rights abuses and asylum seekers as a volunteer.

“I’m an immigrant and a U.S. citizen,” Munezek said. “I welcome refugees and immigrants from all over the world because we are all human, that is what unites us and I was welcomed here. I totally want to pass that on.

Aria Curtis, 29, said the protest was also personal to her because her mother was a Muslim immigrant from Iran.

“It’s really amazing to see so many people out here, especially in a red state,” Curtis said. “The solidarity is amazing. It’s emotional, everything happened to fast. It gives me a lot of hope that there is so much resistance. 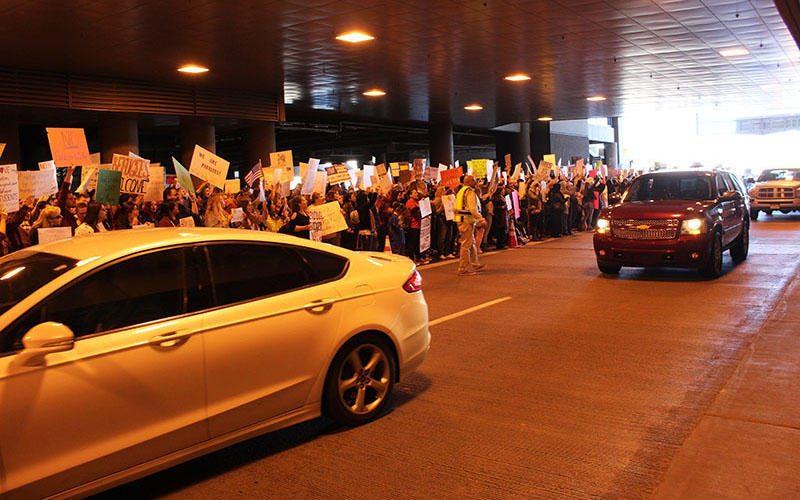 Phoenix resident and activist Lydia Guzman, said she felt it was important that the people of Phoenix came together to stand in solidarity with one another against the executive orders that President Trump has signed.

Supporters of Trump’s executive order spoke out Monday in downtown Phoenix as well.

“I think this whole issue is a tad overhyped,” said John Cardinale of Phoenix. “We need to take precautions at this time to help our country move in the right direction and keep ourselves safe.”

“Let’s go by the original Constitution on this,” said Francois O’Reilly, also of Phoenix. “Trump is a brilliant man … and we can’t be like they are in Europe. I don’t want to see my America that way. We’re afraid.”

The Rev. Chris Schutte from Christ Church Anglican in Phoenix said he reached out Sunday to one of the refugee families that regularly attend services.

“After the service I told them how much I appreciate them and how happy I am to have them here,” Schutte said. “In the Bible, God’s people are commanded to show hospitality to strangers and God has a heart for the stranger and the foreigner.

“So we (Christ Church Anglican) want to connect with the people and the situation that God’s heart is most connected to and showing hospitality to people who are vulnerable fleeing their homeland. That is an important part of the church’s work,” he said.

The church works closely with Phoenix Refugee Connections, a network that brings together Christians from the Valley to help refugees during the resettlement process.

On Saturday, the wife of former Arizona State University and Arizona Cardinals football star Pat Tillman voiced displeasure on her Facebook page over Trump’s executive order. Spurning millions of dollars to play in the NFL, Tillman enlisted in the military in 2002 and was killed by friendly fire in Afghanistan in 2004.

Writing on her Facebook page, Marie Tillman said: “Today, I was deeply saddened by the news of the executive order banning immigration. This is not the country he dreamed of, not what he served for and not what he died for.”