Coach Bobby Hurley’s words fly quickly, with a thick Jersey accent hard to understand. Now, think how hard it would be if you didn’t speak fluent English.

“I’m from New Jersey, and I talk very fast a lot. I have an accent. It might have been even more difficult for Ramon,” Hurley said, referring to freshman forward Ramon Vila. “He might have needed an interpreter for me.”

Vila, a native of Barcelona, Spain, is one of three international freshmen on the Arizona State roster this season, joining Jethro Tshisumpa of Congo and Vitaliy Shibel of Ukraine.

The three were part of ASU’s five-man recruiting class, Hurley’s first full class since taking the Sun Devil job in April 2015. He embraced international recruiting from the outset, tasking assistant coach Rashon Burno with as de facto head of it. Whether it’s scouting, outreach or communication with contacts, it all goes through Burno.

The Sun Devils have a little bit of an edge in international recruiting, especially with the growing success of one of Arizona State’s most famous basketball products.

“They’ve heard of James Harden, so you use that as a starter in a conversation,” Burno said of the former All-American and current MVP candidate for the Houston Rockets. “But then again, they don’t know the difference between Duke and Arizona State. They know they want the opportunity to come to the United States and compete against the very best. You try to educate them as much as possible in the limited amount of time.”

International players have proliferated in the NBA since Houston Rockets center Hakeem Olajuwon of Nigeria became the first foreign-born player to win the NBA MVP award in 1994.

In the time since Olajuwon won the award, 343 foreign-born players have been selected in the NBA draft. Of those, 103 went to American universities before entering the draft.

“It’s a global game now,” Hurley said. “It’s just that NBA basketball has exploded worldwide, and kids everywhere are seeing that and realizing the opportunities to come over here and get an education and increase their chances to be professionals not just in the NBA, but also in their home country.”

If you asked Ramon Vila last October to place Arizona State University on a map, he might not have even pointed to the correct continent.

His definition of “college basketball” was this: Each morning, he would get up at his parents’ Barcelona home and head over to a nearby college, surrounded by the same people he had been going to school with since he was a kid. After his classes, he’d go straight home.

He had never heard of a college dorm room; instead of a social life he’d test his skills out on the basketball court. Playing for the FC Barcelona second division club, he’d regularly go up against grown men and former Division I players, but he held his own with his 6-foot-8 frame. Vila played with the club from the time he was just 11 — two years after he picked up the sport — even garnering national attention when he was selected to the Spanish squad that made it to the semifinals of the under-17 world championships in 2014.

Off the court was a struggle, however. The balance of playing both club basketball and keeping up with his grades became stressful. Vila often had to wake up long before dawn just to finish his homework. He had heard of some of the opportunities available abroad, and he asked a friend who knew the American game for help.

It wasn’t an easy sell to some of his peers. To them, the concept of going to the United States to play college basketball was almost unheard of. But quickly after hearing from Burno, Vila became enamored with the opportunity.

“I looked it up on the internet was like, ‘Hell yeah, that’s a good option,'” Vila said.

NCAA regulations prevent Burno and other college coaches from visiting foreign-born players during their recruitment. The Vilas’ decision would come down to a matter of trust.

Burno had to explain to Vila’s parents, physicians with lives entrenched in Barcelona, that he wanted their son in America. Would you trust your son to a man over the phone whom you had never met, in a country you had never been to?

Burno channeled some of the skills that made him excel as an undersized point guard at St. Anthony’s High School in New Jersey, playing under a legendary coach whom his new boss knows quite well — Bob Hurley Sr., Bobby Hurley’s father.

Burno worked tirelessly on repeated phone calls with a nine-hour time difference between Barcelona and Tempe, directing the family on the positives of an American education. Eventually, Vila’s parents relented. He would travel almost 6,000 miles away from home. He would be a Sun Devil.

Vitaliy Shibel first arrived in Arizona last January. As he walked through the terminal at Phoenix Sky Harbor International Airport, he felt as if every single eyeball was trained on him.

He thinks perhaps it just had something to do with his footwear.

“It’s so hot here,” Shibel recalled. “When I got here I had a jacket, I was in pants and I was in boots and people just looked at me like, ‘What are you doing?'”

Shibel committed to ASU that weekend, culminating a journey from his native Ukraine to Maine and eventually Tempe.

The 6-foot-9 combo forward had been immersed in the international game with the under-18 Ukrainian national team.

He then moved to Lee, Maine, to attend a private prep school, Lee Academy. Boston College, Georgia Tech, Pitt and Tulsa each showed interest in Shibel. But the Sun Devils stood out.

Burno was the first to reach out and quickly made clear why he loved Shibel as a prospect. Shibel’s combination of outside shooting and athletic ability would provide ASU something it did not have.

“Vitaliy was an absolute no-brainer,” Hurley said. “With his talent and versatile skill set, we felt very comfortable there.”

When Shibel returned to Arizona last summer, he left the boots behind. He wanted to acclimate himself to the new climate and culture before getting into the grind of the school year. But just before classes began Shibel tore the anterior cruciate ligament in his left knee during a routine workout. It ended his season months before it even began. He’s had to learn his new team and coach from the sidelines.

He will redshirt this season, and he expects to be back for the start of next season.

Once Vila, Tshisumpa and Shibel arrived on ASU’s campus, their first and toughest opponent was someone in uniform in front of them.

The thing is, they weren’t trying to figure out if they had to switch on a pick-and-roll or where to set a screen.

They were just trying to figure out how they would order dinner, and the person in uniform was a worker at a fast-food restaurant.

Like junior guard Shannon Evans II, Shibel has developed an affinity for coffee. But he prefers Dutch Bros. to Evans’ choice of Starbucks.

“Jethro with Whataburger, he loves it,” Burno said. “That’s like Dominick’s Steakhouse to him.”

For as much as the international trio has had to adapt to American food, they’re not pushing their native cuisines on their teammates.

“They kind of freaked out when I told them we eat rabbit,” Vila said. “Some of the guys wouldn’t even touch octopus.”

The same goes for Tshisumpa, though he couldn’t find his normal cuisine from the Congo if he wanted to.

“With Jethro coming from the Congo, even being here two years, there’s certain things that are not accessible to him,” Burno said. “It’s foods, like monkey brains, stuff like that, that Jethro would normally have in the Congo. Here, you can’t go down to the local market and get that type of food.”

The blending of cultures isn’t limited to the dining room.

In the locker room, a steady stream of hip-hop music flows and presents a new idea for some of the new guys. Every once in awhile, Vila will get control over the music and play some of his Spanish favorites. But nothing compares to when Tshisumpa gets his hands on the aux cord.

“The music is the number one thing that these guys have infused to our locker room,” Burno said. “Jethro’s music is loud, and it’s like a lot of different instruments all at once. He sings the words that no one knows. Just to understand what he’s listening to, that’s been the toughest adjustment for the guys in the locker room.”

Each of the three had a GPA above a 3.0 for the fall semester, Burno said, and Hurley said their options for meeting people haven’t been limited by the scheduling rigors of Division I basketball.

“There’s a fair amount of international students here who aren’t athletes, and I think that’s even another reason for a guy like Ramon or Vitaliy or Jethro to want to be a part of Arizona State,” Hurley said. “They know that they’re welcome and we’re inclusive, and they can find people that are probably from their country that they can spend time with.” 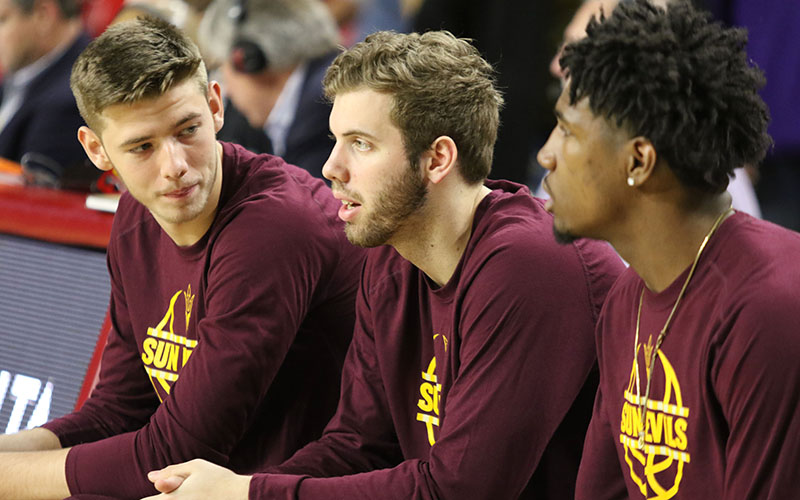 As the only one of the three international freshmen not to get a taste of American play at a prep school, Vila has the most catching up to.

“I think Ramon will be the first to tell you the speed is quicker here,” Hurley said.

“I wasn’t taller (in Spain), but I was big enough,” Vila said. “But when I’m here, if I go to shoot a hook, someone is going to come up and is going to block that shot. In Spain, there’s not these kinds of athletic and explosive players.”

Each morning, he trudges to the weight room to reshape his body for the wear and tear of Pac-12 play.

Tshisumpa is still finding his way, as well, with tantalizing flashes of shot-blocking ability still followed with poor positioning and foul trouble. He has started a handful of games, but his game is still in need of polish.

“He’s only been playing basketball for under four years, so you look at what he could be,” Burno said.

Even if they’re hungry for Taco Bell and Whataburger.