Superintendent of Public Instruction Diane Douglas, said changes to Common Core standards focus on what is “developmentally” appropriate for K-12 students. She compared introducing challenging concepts too early to trying to teach a newborn to walk.

“They need to take things in certain steps along the way or they just won’t learn them appropriately,” Douglas said in an annual State of Education speech earlier this week at the Arizona State Capitol. 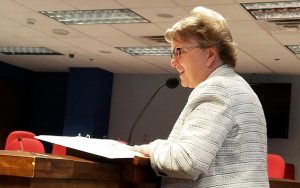 Douglas attacked Common Core standards as resulting in “obscene literature literally being put into the classroom into the hands of our children.” Instead, “our children will once again be reading the great literature of our society,” she said.

The State Board of Education voted in December to adopt the revised standards 8-1, which has been Douglas’ goal since she took office two years ago. The new standards will go into effect in the fall of 2018.

Along with requiring students to learn to write and read cursive, the new standards will refine math teachings such as adding elements of fact memorization for all grade levels.

Douglas said the new standards will have a much stronger emphasis on phonics which has been “the law of the land” for reading education in Arizona for many years. She blamed the “struggling test scores for our early readers” on the lack of phonetic reading instruction in many school districts.

Douglas stacked four large notebooks containing the new curriculum plan for Arizona, a revision of up to half of the original standards. She said 230 teachers spent more than 7,000 hours retooling the curriculum.

Douglas also is proposing a five percent raise for teachers to retain and attract teachers in Arizona.

“It took years to get into this serious situation where too many of our teacher work multiple jobs, they leave the state or they leave the position entirely, trying to meet ends for their family,” Douglas said.

Arizona was ranked 47th in the nation with an average teacher salary of $45,406 a year, compared to the national average of $57,420, according to a 2015 report by the National Education Association.

The minimum starting salary for teachers in Arizona is as low as $23,440 a year, depending on education level and district size, according to an Arizona Department of Education task force. 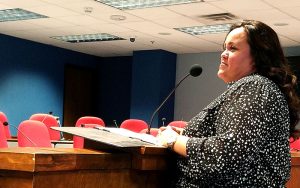 Michelle Doherty, Arizona’s 2017 Teacher of the Year, talked about investing in teachers at the annual State of Education presentation at the Arizona State Capitol. (Photo by Devon Cordell/Cronkite News)

Douglas’ proposed raise would mean a $140 million increase in the budget. She did not outline how to convince the state Legislature to allocate money for the salary increase.

Comparatively, Gov. Doug Ducey has proposed a .4 percent increase for teacher salaries and a $1,000 signing bonus for the “best and the brightest” teachers.

Phoenix teacher Michelle Doherty, Arizona’s 2017 Teacher of the year, said at the education presentation that Arizona needs to invest more in teachers.

Doherty, who lived and grew up in Phoenix, called herself a “proud product of the Arizona education system.”

Teachers who are born and raised in Arizona are considered more likely to stay in the profession, according to the Talent Pipeline Management initiative by the U.S. Chamber of Commerce Foundation.

“I invest in my class, I invest in myself as a teacher and I would like the state to invest in us (teachers) as well,” said Doherty, who teaches in the Osborn Elementary School District.