Those seeking to force a recall election for Superintendent of Public Instruction Diane Douglas have to gather nearly 400,000 signatures. (Photo by James Anderson/Cronkite News) 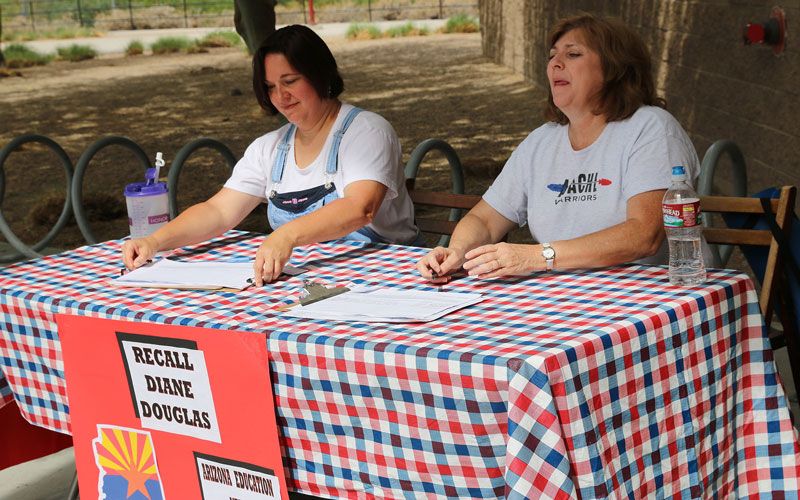 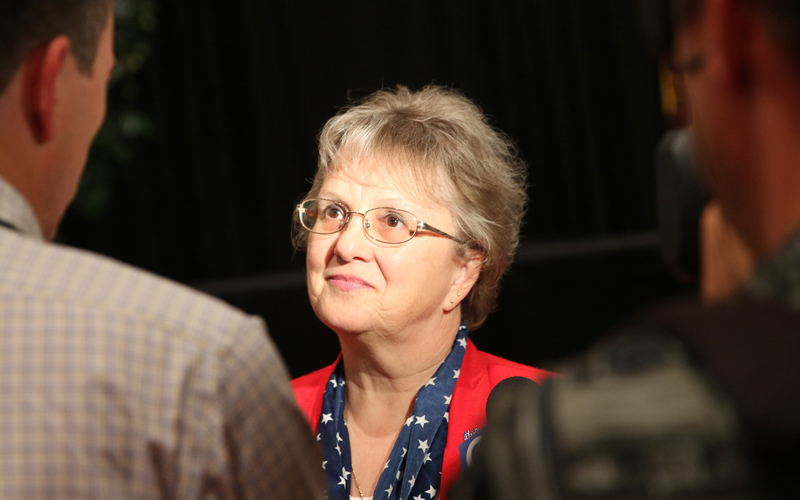 Marsh and Gordon have been gathering signatures three to four days a week since the recall petition launched Sept. 1.

If they and other volunteers succeed in getting 366,128 signatures by Dec. 30, there will be a statewide recall election in which candidates who gather the necessary number of signatures will take on Douglas.

“We’re hoping that through our efforts we’re going to be able to put forth some more qualified candidates to actually focus on a plan for a better education for our children in Arizona,” Marsh said.

Gordon, a former Peoria Unified School District teacher who retired this spring, said an average day of volunteering lasts four to six hours and yields around 60 signatures. She said they obtained about 45 signatures by the two-hour mark of this morning.

While many petition drives to force elections, almost always involving ballot measures, have involved paid circulators, the Coalition to Recall Diane Douglas is a grass-roots effort relying on volunteers. Max Goshert, the group’s chairman, said the movement is growing, with the number of volunteers officially at 864.

He said signatures are coming in at a good pace, although he hasn’t seen an official count.

“I know that we have well over five figures – I can tell you that,” he said.

The coalition’s stated goal is 425,000 to offset invalid signatures.

“We’re going to be going to a lot of the Cardinals games, a lot of the libraries and just different large venues to make sure that we can raise more awareness and get votes,” Marsh said.

“I’ll be surprised if they’re actually successful in getting the recall done,” Wells said. “Now, if they are successful, she’s gone, I think.”

Randy Parraz, who led the recall of Russell Pearce from the Arizona State Senate in 2011, said a successful recall combines a several things.

Sponsor of SB 1070, Pearce was serving as president of the Arizona State Senate when Parraz and Citizens for a Better Arizona filed paperwork against him.

“We felt that there were enough folks there that we could get a team of 25-30 people and do the work, and then raise some money, given how polarizing he was, to kind of have a paid program as well,” he said.

Parraz said he found 10 donors who gave $1,000 apiece. The campaign paid some of its petition circulators, but he said they accounted for less than a third of the total signatures.

He said the majority of the volunteers were white and older than 50.

“Most of them were retired,” he said. “They’re the ones that really carried us to the promised land.”

Because Douglas’ 2014 election canvassed the entire state, the signature requirement for her recall is nearly 50 times larger than Pearce’s.

There’s one example of a statewide petition being completed in Arizona.

Gov. Evan Mecham was elected in 1986, but his public approval deteriorated after he immediately rescinded Martin Luther King, Jr. Day as a paid holiday and later faced several criminal charges. A group of conservatives and liberals formed an opposition to the Republican governor.

Parraz said he is skeptical of the Douglas petition’s chances.

“Is it possible? It’s always possible, but I don’t know what their strategy is,” he said. “It’s not likely they’re going to do it, unless people are that upset.”

He pointed to what he calls other problems with the current recall petition. Primarily, he sees Douglas as “a figurehead,” whose removal wouldn’t effect much change.

“Do I think she’s incompetent? Absolutely. Do I think she should be in office? No,” he said. “But what would the recall accomplish in terms of what they want?”

He and other critics say Douglas’ lack of constitutional power makes her a perplexing choice.

A better target would be the president of the Senate and speaker of the House, Parraz said.

“They’re the ones who, by the Constitution, are supposed to make it happen,” he said. “They’re over there probably laughing, ‘What a diversion.'”

Max Goshert said Douglas has the unique position of being the state’s main representative for education who lobbies the state Legislature for laws and funding. He said her arguments with Gov. Doug Ducey and the Arizona State Board of Education have kept her from being effective.

“She doesn’t have a whole lot of power because she eroded any potential power she had,” Goshert said.

This is not the first time voters have tried to recall Diane Douglas from office.

While serving on the Peoria Unified School District Governing Board, Douglas came under fire for being the treasurer of an organization that opposed a proposed sales tax that would have gone to the school district.

Michelle Mosakowski and several other Peoria parents formed a committee to recall Douglas in 2010. She said the group was progressing toward the required 3,281 signatures when it stopped.

“We had quite a few signatures, but we decided to not go through with it because Diane Douglas decided to run for the Arizona House of Representatives,” Mosakowski said. “So instead we decided to focus on not getting her elected to that.”

Douglas, lost in the 2010 GOP primary for state House, has publicly ignored the latest petition.