Protesters, many in the signature pink hats of the Women’s March, file past the National Gallery of Art. (Photo by Kendra Penningroth/Cronkite News)

Babies, some nursing while their mothers marched, were much in evidence at the Women’s March on Washington. (Photo by Kendra Penningroth/Cronkite News) 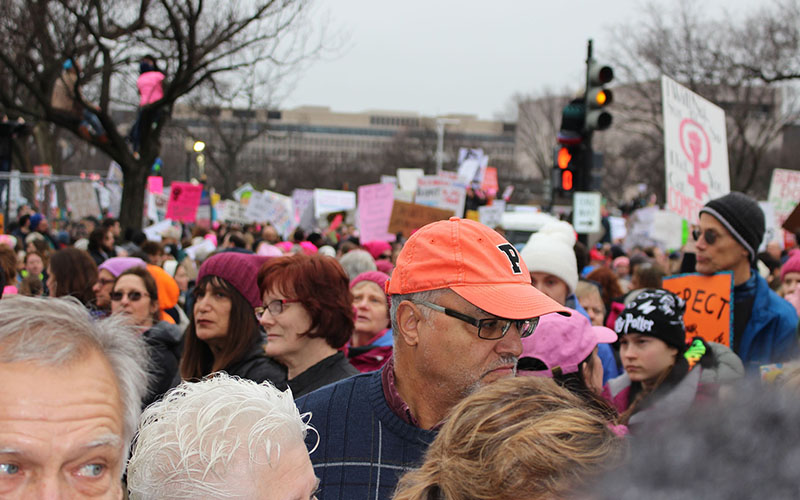 The Women’s March drew men and children, as well as people advocating for issues other than woman’s rights. (Photo by Kendra Penningroth/Cronkite News) 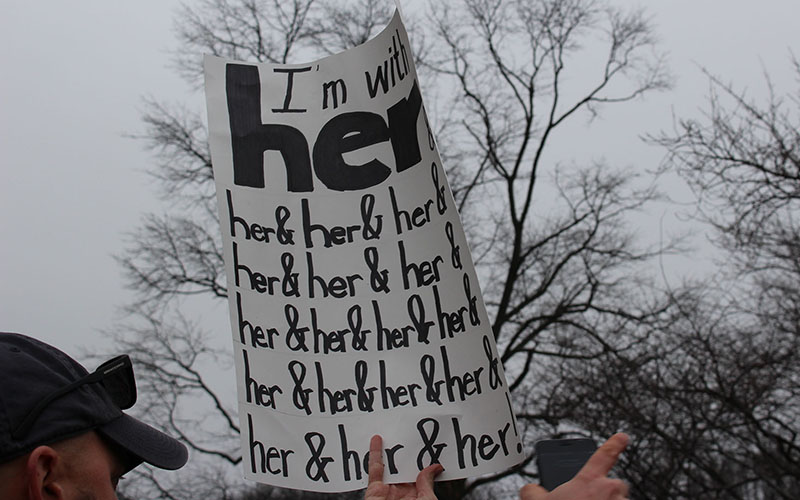 All of the signs at the Women’s March, like all of the march’s signature “pussyhats,” appeared to be handmade. (Photo by Kendra Penningroth/Cronkite News) 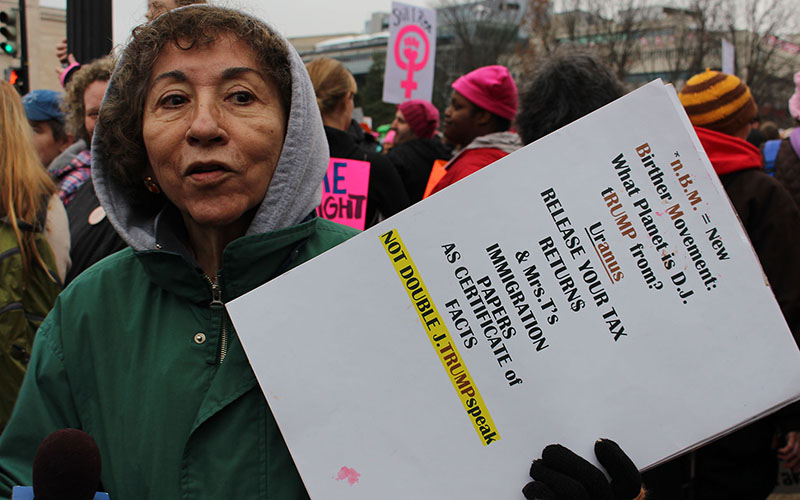 Cordelia Candelaria came from Tempe to the march in Washington because “women’s rights are human rights.” (Photo by Kendra Penningroth/Cronkite News)

WASHINGTON – What was a sea of red hats Friday turned to a sea of pink Saturday, as the thousands who came to cheer President Donald Trump’s inauguration were replaced by many thousands more protesting it.

The Women’s March on Washington drew people from across the country, many in pink “pussyhats,” angered by what they saw as the racist and sexist campaign rhetoric that put Trump in office.

“I came out here because I want to be a voice for people who can’t be heard,” said Tempe resident Jane Konrade, 64, who came to Washington to meet friends for the march. “I have to do something to help this country stay on the right track.”

“Sister” marches were scheduled Saturday in all 50 states and around the world, including events in Phoenix and Tempe. The Arizona Department of Public Safety said the Phoenix march drew 20,000 people.

The Washington march had a distinctly friendly and family vibe, with kids in the crowd, women pushing strollers and some nursing as they rallied at the foot of Capitol Hill. Konrade said she hoped to see more kindness and unity as a result of the march, two of the reasons most-cited by those in attendance.

Attendance appeared to far exceed the 200,000 who organizers expected to show up – and also appeared to eclipse numbers at the Trump inauguration a day earlier.

By 11 a.m. Saturday, the Washington Metro Area Transit Authority was already reporting 275,000 riders on the Metro subway, busier than most weekdays and about eight times as many people as a typical Saturday morning. At 11 a.m. Friday, the day of Trump’s inauguration, WMATA had recorded 193,000 riders.

WMATA updated the numbers at 4 p.m. Saturday, when it reported more than 597,000 riders “with heavy crowds entering the system at all downtown stations.”

One Arizona resident who was there both days said there was a difference beyond the numbers.

Sierra Vista resident Johnny Silvercloud, 35, was at a Friday inaugural protest-turned-riot where D.C. police had to tear-gas and arrest some demonstrators who resorted to vandalism. He found himself back Saturday, smack in the middle of the Women’s March.

“The vibe for yesterday was more about resistance and the rejecting of Donald Trump,” Silvercloud said. “Here, today, seems like a celebration … women do have power.”

Most protesters Saturday brought signs from home with messages ranging from “protect our earth” to “keep abortion legal” – to profanities directed at Trump, the most-sanitized of which boiled down to “He’s not my president!”

What began as a women’s march grew to include support for LGBTQ, Muslim, immigrant, disabled, female and minority populations.

Many of the signs were a direct response to an audiotape that surfaced during the campaign in which Trump can be heard bragging about groping women.

Women – and men and children – at Saturday’s march donned the pink “pussyhats” that have become trademark for the march – pink hats knitted or sewn to give the appearance of cat ears.

The March appears to have begun. pic.twitter.com/6vwEhjCgh0

The march from the Hill to the White House was supposed to begin around 1:15 p.m. at Third Street and Independence Avenue, where many gathered to socialize, take photos and chant things like “Love Trumps Hate.”

But the crowd ended up being so large that actual marching was difficult. Very few protesters had maps or even knew where the starting point was, resulting in much less marching, and much more massing.

Tempe resident Cordelia Candelaria was at the march with her family.

“I’m marching for democracy, to let them know that women’s rights are human rights,” said Candelaria, a regents’ professor at Arizona State University’s Emeritus College and its School of Transborder Studies.

“It’s inspiring to see so many people who are taking action to hold our administration accountable, all generations, all colors, all states,” she said.