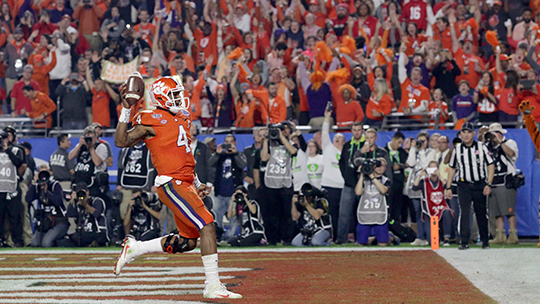 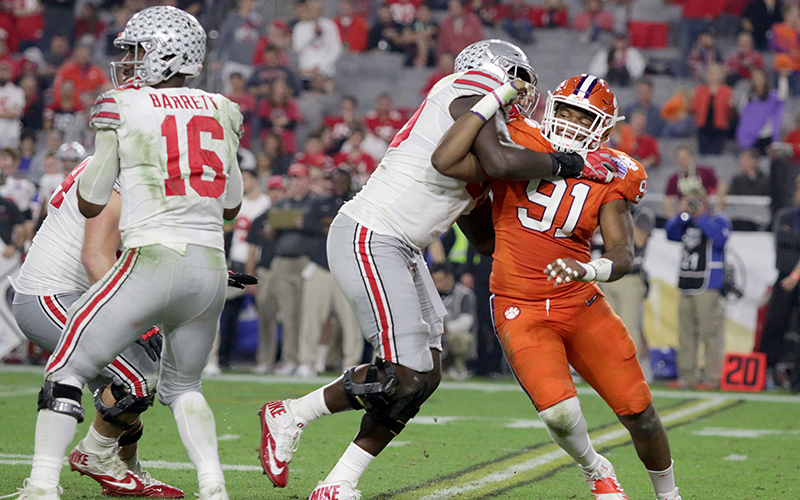 Clemson defensive end Austin Bryant chases after Ohio State quarterback J.T. Barrett during the PlayStation Fiesta Bowl at University of Phoenix Stadium in Glendale on Saturday, Dec. 31, 2016. The Tigers had 11 tackles for loss in this game. (Photo by Logan Newman/Cronkite News) 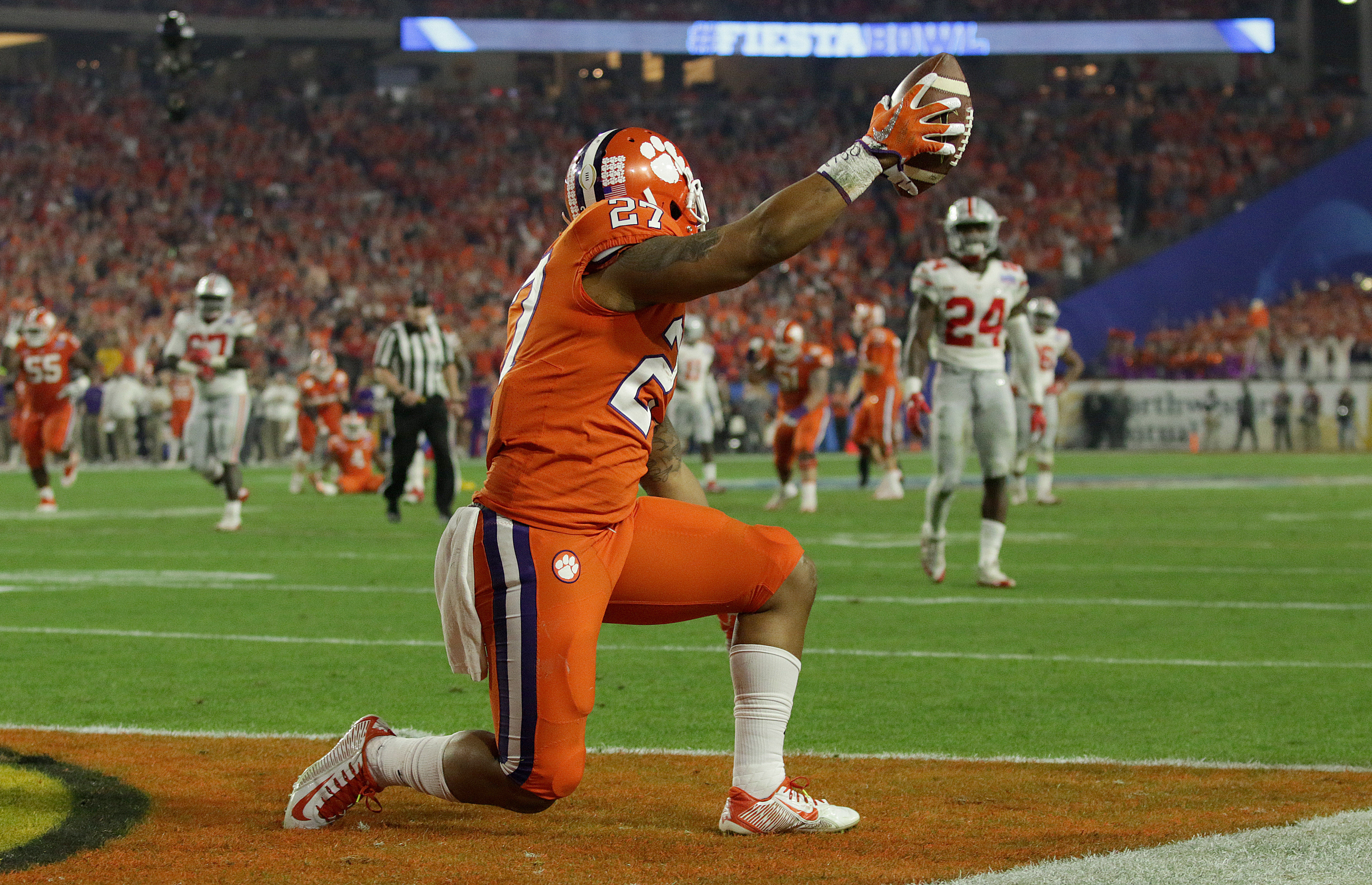 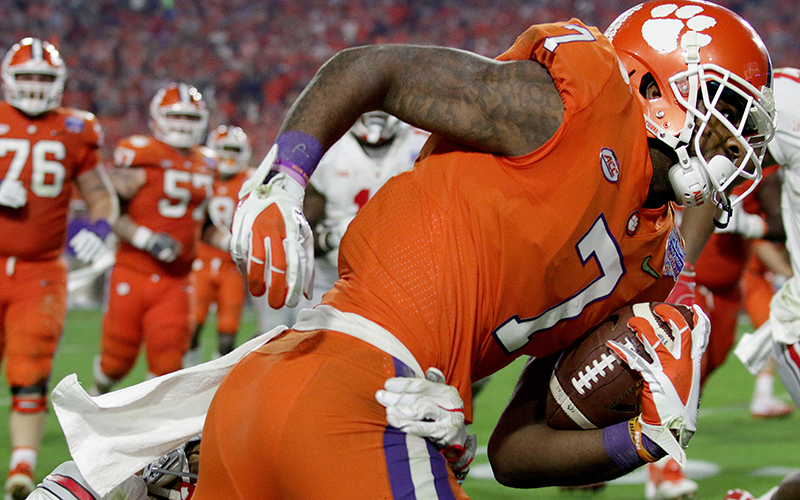 After a 31-0 takedown of Ohio State, there may be some sweetness to overpower the sour, particularly for head coach Dabo Swinney, who hadn’t won a game in the Valley before Saturday and now will challenge Alabama in a championship rematch.

As a player at Alabama, Swinney lost in the Fiesta Bowl to Louisville 34-7 at the end of the 1990 season. Last year, his Clemson team fell to his alma mater 45-40 after giving up 24 fourth-quarter points in a comeback Crimson Tide effort.

This time, he found success in the desert by helping his team fix its major problem from last year’s championship game: the defense.

Swinney said he was most proud of his team’s red zone defense. Not that the Buckeyes got there often – its first trip came in the fourth quarter. The defensive stop on that drive exemplified the game.

With just over 11 minutes remaining and Clemson leading 24-0, Buckeye running back Curtis Samuel ran the ball 64 yards downfield, the longest play from scrimmage of the game. That set the team up at Clemson’s 16-yard line. But a false start pushed Ohio State back five yards, and then Ohio State quarterback J.T. Barrett was hit after throwing a quick pass to the left that fell incomplete.

Clemson’s defense sacked Barrett on the next two plays and he was forced to heave the ball into the end zone on fourth-and-26. It was intercepted and returned 86 yards to the Buckeyes’ 14-yard line. An Ohio State penalty on the return moved the ball to the 7-yard line and two plays later, Clemson running back Wayne Gallman ran it in to elevate the lead to 31-0.

“We didn’t have any illusions they wouldn’t score a point,” Swinney said. “(Our players) were highly motivated and excited to go play the game. We knew we had a lot to prepare for and thankful that we had a little extra time.”

Ohio State quarterback J.T. Barrett, who was the offensive MVP of the Fiesta Bowl a year ago, threw for just 127 yards and had a net rushing gain of -2 yards on 11 carries.

The 31-0 defeat was was the first time Buckeye coach Urban Meyer was shut out in in his career and the first loss for him as a head coach in the state of Arizona.

Clemson kept a lid on Ohio State’s usually potent rushing attack. During the regular season, the Buckeyes led the Big Ten in rushing and were 12th best in the nation, averaging 245.2 yards per game behind their running back tandem of Mike Weber and Curtis Samuel and their versatile quarterback. But Saturday, the Tigers limited the Buckeyes to 88 rushing yards, their lowest output of the season. Without Samuel’s 64-yard rush that stands as an outlier, the Buckeyes would’ve only accumulated a meager 24 yards on the ground. Additionally, Weber fumbled twice, losing one of them, one of the Buckeyes’ three turnovers in the game. The Tigers sacked Barrett three times and had 11 tackles for loss, costing Ohio State 51 yards. The Buckeyes’ 215 total yards of offense was also a season low.

Ohio State’s starting left guard, freshman Michael Jordan, was injured on the second drive of the game, but Barrett would not blame the team’s offensive woes on that loss and his replacement, redshirt sophomore Demetrius Knox.

“We always believe in the next man up … the guy behind him should be ready to go when his number’s called,” Barrett said. “And we just weren’t. We didn’t help (Knox) on offense, knowing that he probably didn’t get a lot of reps (in practice).”

Tigers defensive tackle Carlos Watkins said they knew Ohio State would be a tough opponent and had a simple answer for his team’s success.

“We had a great game plan, Coach (Brent Venables) gave us some great calls,” he said, crediting the team’s fifth-year defensive coordinator. “We played our hearts out and like I said, give credit to Ohio State, that’s a great football team.”

Defensive back Clelin Ferrell, who redshirted last year, won the Defensive MVP award after getting four tackles – three of them for losses and one sack.

“Last year I was part of the team but I wasn’t playing,” he said. “This year, when we’re coming in being a starter playing against Ohio State, it’s kind of crazy that I got to come out here and perform at a high level.”

Next up for Ferrell and the Tigers, a rematch with Alabama for the national championship for the second year in a row. They’ll play January 9 in Tampa, Florida.

Linebacker Ben Boulware, who had five tackles, one for loss, said he had been hoping for this matchup.