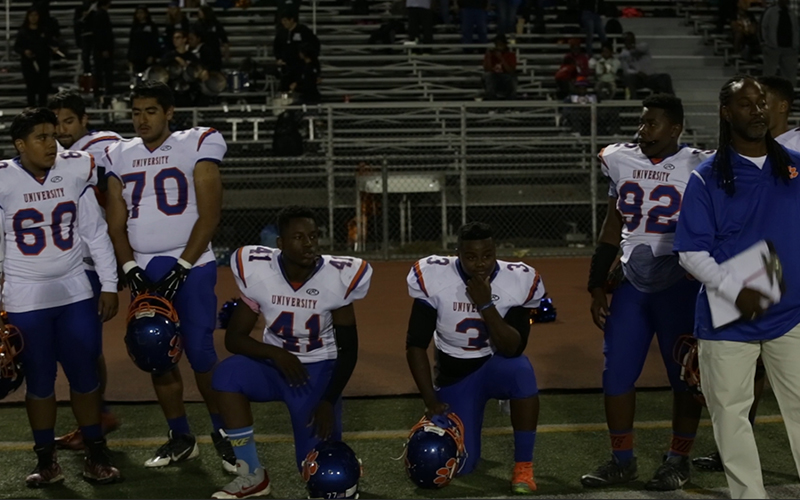 University High School senior Terrell Cox Jr. (#3) kneels during the playing of the national anthem prior to the start of the game against Huntington Park on Nov. 10, 2016. (Photo by Katherine Fitzgerald/Cronkite News) 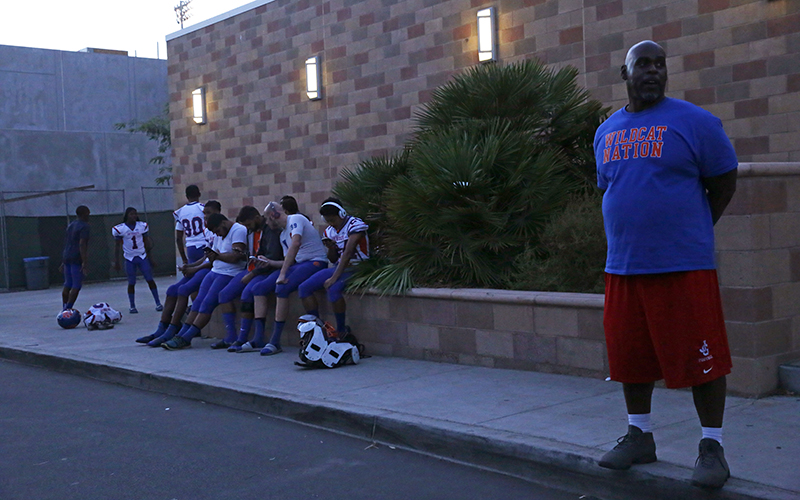 University High School Football head coach John Washington waits outside the school with his players for a bus that will take them to their playoff game in Los Angeles on Nov. 10, 2016. (Photo by Katherine Fitzgerald/Cronkite News)

It wasn’t a surprise when the team wanted to protest by kneeling during the national anthem to spread awareness about claims of racial inequality and police brutality, becoming one of the first high schools to follow the example set by San Francisco 49ers quarterback Colin Kaepernick.
Washington said the players on his team are more socially aware than previous students.

“I told them that it’s their right. And at any time in this country, when there was social injustice or there was some revolution of some sort, it started with young people,” Washington said.

At least 53 high school football teams across the country and one youth league team in Texas had at least one player participate in kneeling during the playing of the national anthem since Kaepernick started the protest during the NFL preseason.

University senior linebacker and running back Terrell Cox Jr., who participated in kneeling before the anthem this season, said he had a friend who was recently shot and killed by a police officer.

“In order for things to start getting better, we should actually, we should treat everybody the same. And not just discriminate against each other because it’s not right, and it hurts more than just a race,” he said. “It hurts society.”

Cox was impressed that money and fame didn’t prevent Kaepernick from speaking out against racial discrimination.

“Because a lot of people will believe that athletes just have egos, and they just focus on themselves, but really with this kneeling thing, they’re showing that everybody matters. It doesn’t matter what you are and who you are,” Cox said.

University senior running back and linebacker Shawn Davis, who also kneeled throughout the season, said “I still felt this way that colored people were not treated right in America, and there’s a lot of stuff going on right now and a lot of stuff happened in the past that people really overlook. So I feel like this is really a way to get people to notice what’s really going on in America.”

Davis described dealing with a racist comment while he was in middle school after his father passed away.

“My father died. And I remember, I was in middle school. A kid told me, ‘You really are black, huh? You don’t have a dad.’ So uh, yeah. That really, I was like (gestures to heart), you know, that just got to me,” said Davis.

Reaction to Kaepernick’s protest has been mixed across the country. Several athletes and teams have followed suit, while there has been extensive criticism as well. Players from Grace Brethren, a private school located in Simi Valley, California, had mixed opinions on the Kaepernick decision to protest the national anthem.

Nick Juels, a senior quarterback at Grace Brethren in Simi Valley, California, said he respects Kaepernick using his platform in a peaceful manner to address an issue that he said needs to be solved. But he is not in favor of protesting the anthem.

“People, African-Americans especially, that have to feel unsafe when a cop pulls them over it’s absolutely ridiculous… but there’s a level of respect that I believe during the national anthem that you should show those men and women who are serving overseas and have died for our country.”

Lancers’ wide receiver Noah Bean said he isn’t necessarily in support of Kaepernick’s protest but acknowledged that he raises his fist during the national anthem every time.

“My cousin and a lot of my family members died for everybody to live as lavish as we do so I’m not hating on the Army or Navy but I feel like, as a people, we have a right to take a stand and I feel like it was blown out of proportion,” said Bean, who is African American.

Bean said he deals with racism everyday living in Simi Valley and described a story about an older man who yelled at him and accused him of not living in his own neighborhood.

“This is not where you’re from, this is not your place, you can’t do that here, drive in your neighborhood like I would drive in yours,” said Bean, referring to the man yelling at him.

On September 9th, a football announcer for McKenzie High School in Alabama had a much different point of view of Kaepernick’s protest and expressed it to the people in attendance.

According to a Facebook post, the announcer said “if you don’t want to stand for the national anthem, you can line up over there by the fence and let our military personnel take a few shots at you since they’re taking shots for you.”

Muhammad Ali, Jim Brown, Bill Russell and Kareem Abdul-Jabbar were black athlete activist icons during the Civil Rights Movement of the 1960’s. In 1967, Muhammad Ali refused to serve in the Vietnam War and was required to serve jail time. In the following year, U.S. sprinters Tommie Smith and John Carlos raised their fists after winning a gold medal during the 1968 Olympics.

All of these athletes were admired by supporters of the Civil Rights movement because they weren’t afraid of the public and media backlash during a time period where it was extremely rare for African-Americans to receive endorsements.

In fact, former USC Heisman trophy winner and track star OJ Simpson was one of the first black athletes to have mainstream success.

While Ali had what advertisers call “high negatives,” because of his political expressions, one of the main reasons Simpson received crossover success was because of his “animosity to politics,” according “Birth of a Nation’hood,” a collection of essays co-edited by author Toni Morrison.

“He (Simpson) publicly denounced the Olympic protests. This denunciation was of a piece with Simpson’s generally oppositional stance vis-à-vis the revolt of the black athlete, though his frequently noncombatant response of simply ignoring freedom struggles…are vital in accounting for Simpson’s ability to crossover,” Morrison wrote.

The correlation holds true today. With endorsements worth millions of dollars available for athletes, many athletes in the current generation have expressed their concerns for losing endorsements and missing out on contract extensions if they speak out on social issues.

Abdul-Jabbar, who’s written about athlete activism and race relations in the U.S., said Jordan chose “commerce over conscience” in an interview with NPR’s Michel Martin.

“You can’t be afraid of losing shoe sales if you’re worried about your civil and human rights. He took commerce over conscience. It’s unfortunate for him, but he’s gotta live with it,” said Abdul-Jabbar.

In 1992, Chicago Bulls shooting guard Craig Hodges, who was also critical of Jordan’s silence regarding social issues, wore a dashiki to the White House after the Bulls won that year’s NBA title.

LZ Granderson wrote in a story for ESPN the Magazine that “Hodges handed the President a letter, with issues he deemed necessary to be addressed within the African-American communities of the U.S., as well as systematic and governmental concerns he had.”

The NBA didn’t take long to say Hodges actions were “embarrassing” to the league and he didn’t play another second in the NBA, despite winning three consecutive 3-point shootouts at NBA All-Star Weekend.

The only other player to win three straight three point shooting contest was Boston Celtic Hall of Famer Larry Bird, according to Granderson.
He later claimed he was blackballed by the NBA in the 1996 case Craig Hodges vs. the National Basketball Association for his letter to the President and criticizing former Chicago Bulls superstar Michael Jordan for not speaking out on social issues.

Hodges was quoted as saying “I or my agent had called every team in the NBA and not one would even give me a tryout, let alone sign me.”

In 1996, Denver guard Mahmoud Abdul-Rauf didn’t stand for the National Anthem because of his religious beliefs and was suspended for one game.

National anthem protests have become more frequent since the turn of the century.

Major league baseball player Carlos Delgado sat in the dugout for the entire 2004 season during the playing of “God Bless America” as a silent protest to the wars in Iraq and Afghanistan.

During the singing of the national anthem in 2014, Knox College women’s basketball player Ariyana Smith protested the killing of unarmed African-American teenager Michael Brown, who was shot and killed by an officer in Ferguson, Missouri.

It’s not just an African-American viewpoint.

U.S. Women’s soccer player Megan Rapinoe kneeled during the playing of the national anthem at a National Women’s Soccer League contest on September 4th, in solidarity with Kaepernick’s protest and supporting LGBTQ rights.

“Being a gay American, I know what it means to look at the flag and not have it protect all of your liberties. It was something small that I could do and something that I plan to keep doing in the future and hopefully spark some meaningful conversation around it. It’s important to have white people stand in support of people of color on this. We don’t need to be the leading voice, of course, but standing in support of them is something that’s really powerful,” said Rapinoe.

The election of Donald Trump on Nov. 8 sparked more protests.

Trump expressed numerous times that he wants to expand stop and frisk policies that critics believe are an element of racial profiling and he’s also openly criticized the Black Lives Matter movement by calling the group “a threat and accused the group of essentially calling death to the police.”

Tampa Bay Buccaneers wide receiver Mike Evans took a knee in protest of the election results. “If this happens, then America is not right right now,” said Evans. “I said this a long time ago. When (Trump) ran, I thought it was a joke, and the joke continues. I’m not a political person that much, but I got common sense. And I know when something’s not right.”

On Nov. 15, five NFL players went to Capitol Hill to speak to the speaker of the House of U.S. Representatives Paul Ryan about race relations and police brutality.

According to ESPN writer Jim Trotter, Boldin said “there’s a huge divide in our country now, and if we don’t find a way to heal it things are only going to get worse. I don’t want to bring my kids up in a country like that. I don’t think any of us do. We’ve got to do some work. And we can’t leave it to politicians and the government alone. We have to make a difference. If we don’t, we’re doomed.”

Athletes will continue to use their platforms to spark conversations on political issues if a national racial divide becomes more evident in the following years.

Will America show admiration for Colin Kaepernick eventually after years of backlash? For instance, Muhammad Ali was criticized in his prime then praised as a cultural icon.

Kaepernick will never be dubbed the greatest of all-time in his sport, but he and Ali will be known for unapologetically trying to hold America accountable for the values it’s supposed to stand for, which are “liberty and justice for all.”