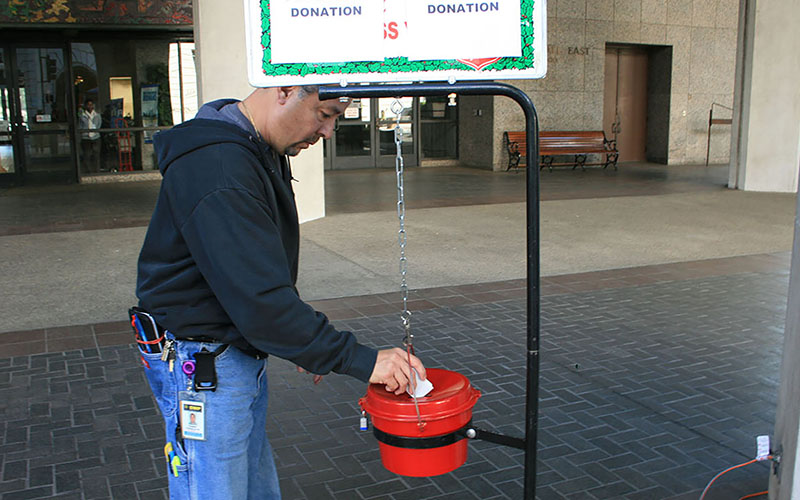 Nonprofits see “Giving Tuesday” as an antidote to the consumer-focused days that precede it – and a chance to raise money. More established groups like the Salvation Army, with its iconic red-kettle drive, see Giving Tuesday as just one part of a larger seasonal fundraising effort. (Photo by Salvation Army USA West/Creative Commons)

WASHINGTON – After the unbridled consumerism associated with Black Friday, Small Business Saturday and Cyber Monday, nonprofits are hoping to appeal to supporters’ generosity and capture some donations, since their wallets are already open.

More than 400 Arizona nonprofits are registered to participate this year in Giving Tuesday, a loosely organized day that calls on people to focus on generosity and on giving back instead of buying.

“I actually think it cuts through the noise because it is a little bit of a different message,” said Terri Wogan, who runs Social Venture Partners, a nonprofit that connects philanthropists and supports area nonprofits.

“My hope is it puts our focus back on sharing and giving where it can have a real impact on your community,” said Wogan, whose organization is participating for the first time this year.

“We had been missing the opportunity to focus people on what the giving season is really about,” said Jamie McDonald, one of a small number of people affiliated with 92Y who work on national messaging and help local groups shape their fundraising campaigns.

“It’s a collective moment of generosity. One of the things that works about Giving Tuesday … is this notion that it’s not just me making my impact, it’s multiplied by everyone else making their impact,” McDonald said. “Together, it’s exponentially greater.”

Nonprofit groups raised more than $117 million online on Giving Tuesday in 2015, according to the group. Donations came from across the globe, from countries where Thanksgiving, Black Friday and the like are not on the radar.

The giving takes many forms: McDonald said one elderly woman on a fixed income was unable to give financially, but donated her “beautiful old piano” to a children’s organization.

In Arizona, organizations from food banks to wildlife centers that are doing mission-driven work are ready for that support, in whatever form it comes.

Social Venture Partners dedicated a staffer to organize the effort and are hoping to raise $5,000 on Tuesday. Wogan says the group plans to mold the Giving Tuesday effort into a yearlong campaign to encourage ongoing support.

“It’s creating this global movement, and it just elevates the importance of (nonprofits) when it’s perceived as something bigger,” she said.

The spirit of generosity of Giving Tuesday has already inspired Amy and Patrick Armstrong. The couple pledged to match Giving Tuesday donations up to $3,000 to Social Venture Partners, hoping to double other donors’ gifts and amplify the cause.

“I think it’s a reminder of the consumerism versus the giving,” Amy Armstrong said. “In this time that you’re buying a bunch of stuff and giving to others, think about people who need support in other ways.”

She just hopes people have some money left in their bank accounts by Tuesday.

For many nonprofits and charities, Giving Tuesday is more than just a day to ask for a little extra. It kicks off the year-end giving vital for financial stability.

“Smart nonprofits really think about Giving Tuesday as a piece of a continuum of engagement with supporters,” McDonald said. “It’s not a stand-alone thing. It should be part of that continuum.

“If you’re going to raise money on Giving Tuesday, it has to be planned for and thought through beforehand, organized and strategic,” she said.

“While it (Giving Tuesday) is important to us, it’s not the only day of our season,” Stroupe said of the annual red-kettle fundraiser season. “That’s where we get 60 percent of our gifts.”

The Salvation Army does plan to highlight stories of its work on social media on Giving Tuesday.

And though she said Christmas and the Salvation Army’s caroling, bell-wielding volunteers are almost synonymous, Stroupe said there’s room for all the charitable organizations looking for the generous gifts this holiday season.