Latino organization leaders gathered at the National Council of La Raza in Washington to say they are ready to work with President-elect Donald Trump – but also ready to push back against what they see as harmful policies. (Photo by Sabella Scalise/Cronkite News) 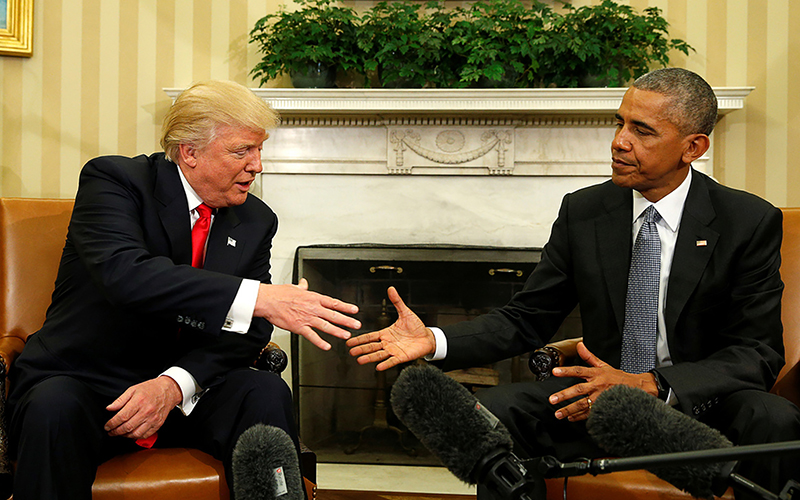 President Barack Obama met with President-elect Donald Trump in the Oval Office of the White House to talk about the transition between administrations, one of several meetings Trump had with Washington officials. (Photo by Kevin Lamarque/Reuters) 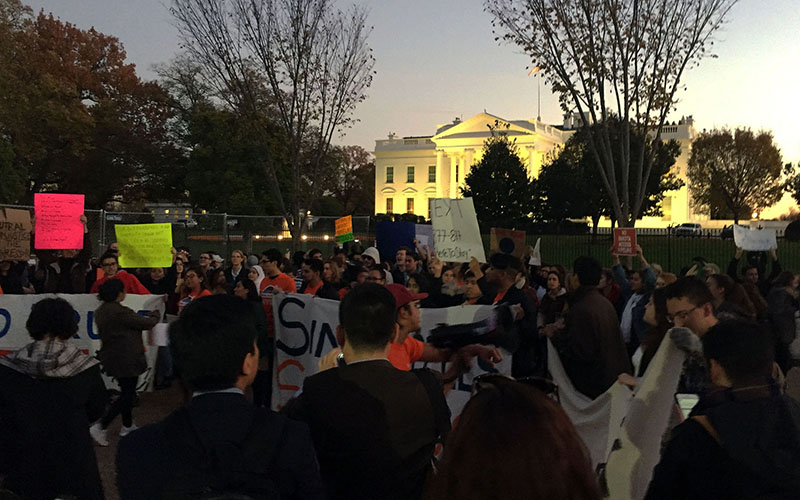 Protesters gathered in front of the White House Thursday after President-elect Donald Trump first visit with President Barack Obama. While some groups have said they will work with Trump, protesters here refused. (Photo by Adam DeRose/Cronkite News) 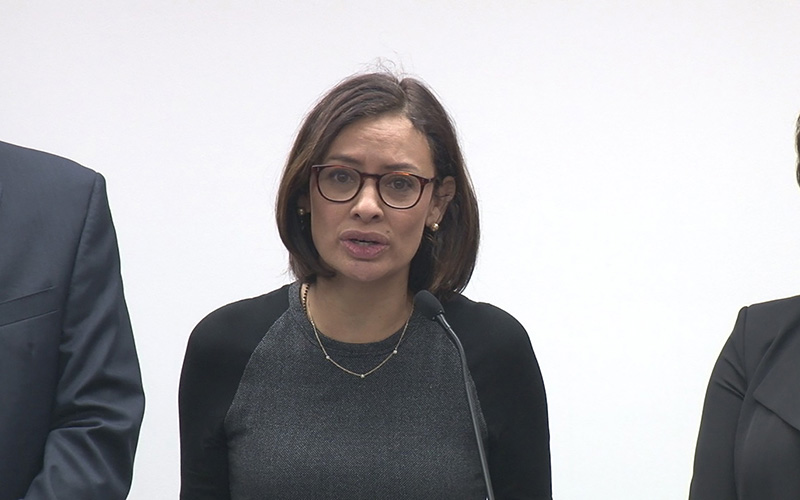 María Teresa Kumar, president and CEO of Voto Latino, spoke President-elect Donald Trump will face the wrath of a growing Hispanic electorate if he does not move to repair relations after the bitter rhetoric of his campaign. (Photo by Sabella Scalise/Cronkite News)

WASHINGTON – Minority and civil rights organizations met in Washington Thursday with a message for President-elect Donald Trump: They are willing to work with his administration, but only if he rejects what they called the hateful rhetoric of his campaign.

“We cannot and will not give up, but we also have to understand that we have to be in this for the long haul,” said Janet Murguia, president and CEO of the National Council of La Raza, which hosted other Latino groups at one news conference.

But she joined others warning that advocacy groups will “actively and fearlessly resist policies and proposals that undermine the interests of our community and Americans at large.”

It was one of two similar events in Washington that featured groups representing everyone from Latinos to Asians, Muslims to Jews, women to LGBT individuals, teachers to people with disabilities.

Most had been the targets of offensive comments by Trump or his supporters during the just-ended campaign and all said Trump needs to walk back the rhetoric.

“Women will not go back,” said National Organization for Women President Terry O’Neill, referring to accusations against Trump of sexual assault. “We will fight back.”

The meetings came as Trump was making the rounds in Washington, meeting President Barack Obama at the White House to talk about the transition and heading to the Capitol for sessions with House Speaker Paul Ryan and Senate Majority Leader Mitch McConnell.

That came against a backdrop of anti-Trump protests outside the White House, just one of many happening nationwide, most outside Trump properties.

Tom Saenz, the president and general counsel of the Mexican American Legal Defense and Educational Fund, offered hope that Trump will be able to work with minority groups.

“There’s still a possibility the president-elect will govern differently than he campaigned,” Saenz said.

Lawmakers who campaigned against Trump have also tentatively extended an olive branch to the president-elect in the days since his surprising win Tuesday.

Sen. Bernie Sanders, D-Vermont, who ran unsuccessfully for the Democratic presidential nomination, was one of Trump’s most vocal critics during the campaign, but said in a statement Wednesday that he is prepared to work with the new president – with the same caveats as the other groups.

“To the degree that Mr. Trump is serious about pursuing policies that improve the lives of working families in this country, I and other progressives are prepared to work with him,” Sanders’ statement read. “To the degree that he pursues racist, sexist, xenophobic and anti-environment policies, we will vigorously oppose him.”

Petra Falcon of Promise Arizona said Latinos in the state will be watching Trump’s efforts to repair relations with their community and ensure fairness and equality.

“If he wants to be president and think about the future, he needs to understand that Latinos in this country have a huge impact on the economy and that role cannot be dismissed,” Falcon said Thursday from Phoenix.

“What we saw today with Obama and his gesture to quickly support a transition of power, we need to see that from Trump as well,” Falcon said. “He needs to move quickly to send a message to the country that he will listen to everyone.”

Even though they were not able to block Trump’s election, the groups said he cannot ignore the growing power of Hispanic voters. They pointed to the defeat of longtime Maricopa County Sheriff Joe Arpaio as an example of their growing political strength.

“Latinos are now in a position of power and they were able to demonstrate that, collectively, we were able to make incredible strengths and incredible lengths,” said Maria Teresa Kumar, president and CEO of Voto Latino. “We set the groundwork to continue these inroads in the future.”

Murguia said that power will only grow and that it will be felt at the ballot box and elsewhere – if needed.

“I could assure you that we are not powerless, we have a voice that no one can take away or silence,” Murguia said. “We have our vote, which we need to exercise in every single election, not just every four years.”