Nogales resident Cecilia Montaño, 82, cast her ballot at the Veterans of Foreign Wars polling location in Nogales on election day. She said voting is important this year because the presidential candidates are so different. (Photo by Zach Quinn/Cronkite News)

Anyone who was in line prior to the 7 p.m. closing time will be allowed to vote.

The Arizona Democratic Party went to court to try to keep the polls open until 9 p.m. because of voting problems throughout the day, but Maricopa County judge rejected its request.

County Recorder Helen Purcell had opposed the extension, according to the Associated Press.

Students from North High School and Maryvale High walked out, saying they were going to canvass voters and rally against the negative messages of the campaign.

Maximiliano Gutierrez, a sophomore at North High School, helped organize the student walk-out at his school today in partnership with Bazta Arpaio. Gutierrez said he and his fellow classmates want their actions to inspire others to vote.

“We’re hoping that people at home, they see us and they get a passion in them,” he said. “They get pumped to go vote and actually go to the polls and vote against Arpaio and he actually gets kicked out of office after 24 years.”

Zach Russell, 25, waited 40 minutes to vote at First Baptist Church in Litchfield Park. He was not comfortable sharing which candidates received his vote, but said it would be nice to live in a country with a thriving economy and more benefits, even if that means paying more taxes.

Also at First Baptist, Brandon Rosas, 18, voted for the first time. Rosas said he registered to vote as soon as he was able, because he realized how important it is. Hillary Clinton received his vote because he worries about the message Trump’s election would send to other countries.

Matthew Vega, 25, came to the polls at First Baptist but did not vote. Vega has never voted in the past either. He does not think voting is pointless, but as a member of the Latino community, he feels nothing will change regardless of which candidate becomes President.

“In all honesty, I can see why people just sit back, and they’re in their living rooms with their families watching it happen because they serve no purpose in voting, even me,” Vega said. “I would hope that people understand why I’m not voting.”

12 p.m. update: Voters at the Salvation Army polling location in Downtown Phoenix experienced wait times up to two hours this morning, according to Steven Slugocki, Maricopa county chairman for the Democratic party.
“I’ve been getting reports all across Maricopa county of long lines, e-poll book issues, people being told that they’re not on the ballot rolls, that they have to vote provisional,” Slugocki said. In some cases, he said, voters showed up to the location where they had been registered for years, only to be turned away.

When voter Aaron Bartlett arrived at T.G. Barr Middle School this morning, poll workers said they couldn’t find him in the system. He called the Maricopa county recorder’s office and a female staffer confirmed he was at the right polling place, echoing Bartlett’s confusion about why he had to vote provisional.

“I just hope that my vote counts because (there) is so much at stake,” Bartlett wrote in an email to Cronkite News this morning.

Slugocki said lines were starting to die down after the early morning rush, and he’s hopeful the issues will be fixed in time for the next rush between 5 p.m and 7 p.m. 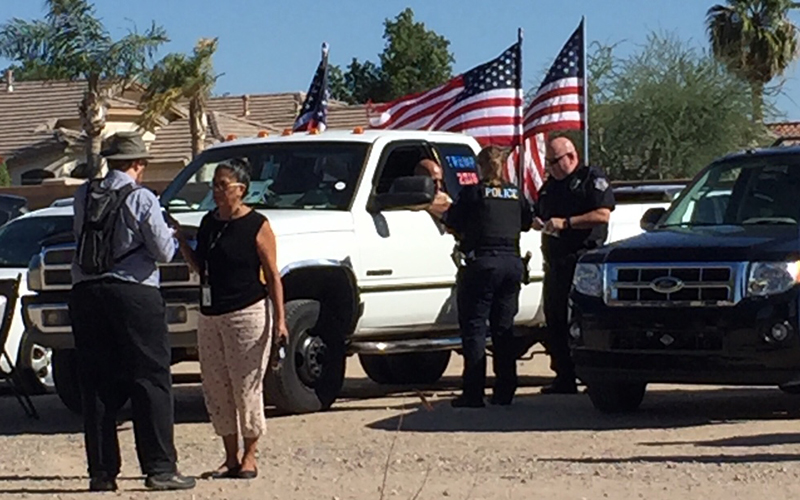 An unidentified man was asked by police to leave the Sun Valley Community Church polling place in Mesa Tuesday morning after law enforcement officials learned he had a gun. Arizona law prohibits guns at polling places on election day. This woman who took the photo shared it with a Cronkite News reporter at the scene. The photographer asked not to be identified.

Police were called to the polling location at Sun Valley Community Church in Mesa when a man showed up with gun in a holster. Police told the man he had to leave the property.

Arizona is one of six states in which it is illegal to take a gun to a polling place. At each polling place, there is a 75-foot line where guns or photos or electioneering are not allowed, regardless of whether the gun owner has a permit.

Voters at Sun Valley Community Church in Mesa say lines have been around a two hour wait all morning. (Photo by Lindsey Wisniewski/Cronkite News)

Arizonans were ready to vote when the polls opened at 6 a.m. with several locations across the city seeing long lines as voters hoped to cast their ballots before the work day started.
After a few computer issues and lines approaching an hour, the polling places seemed to be catching up to the crowds in mid-morning.

Check-in computers in the Pueblo precinct crashed as soon as the polling place opened, according to Arizona voter John Washington. He said poll workers were able to get one computer functioning, but by then the line of voters wrapped around the block.

In some cases, the county recorder’s office assigned two precinct polling places to the same location, causing some confusion and frustration among voters on arrival. Spokesperson Elizabeth Bartholomew said there is one polling place for every precinct, but they utilize co-location when certain precincts lack suitable facilities to host a polling place. Even when two polling places share an address, each precinct has different sets of poll workers and electronic poll books, she said.

At Maryvale Church of the Nazarene there are lines currently running out of the building, but not much farther. The parking lot is crawling with reporters from Vice, KPNX, Arizona 15 and other news networks.

Adrian Fontes, the Democratic nominee for Maricopa County Recorder who is over looking the polling station today, said: “There are more reporters than voters in the parking lot here.” 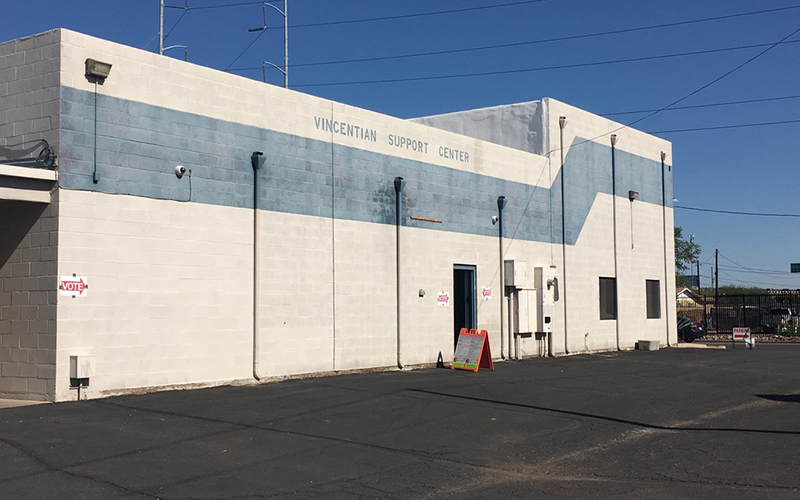 Polling location has seen little movement during lunch time. Location is tucked away and difficult to find. (Photo by Giselle Cancio/Cronkite News)

In Nogales, the lines were short at the city’s four polling places.

Nogales resident Cecilia Montaño, 82, said voting is a privilege. To people who don’t vote because they feel they’re vote doesn’t matter, she said “If you want changes in America, your vote counts.”

More than 1.6 million early ballots were received as of November 7, according to Garrett Archer, the assistant director of elections at the Secretary of State’s office. That number represents about 46 percent of registered voters in the state.

Arizona saw a nearly 15 percent increase in registered voters since the last presidential election in 2012, according to the Secretary of State’s website. Nearly 3.6 million Arizonans hold active registrations, a number 20 percent greater than when Arizona Sen. John McCain faced then-Sen. Barack Obama in 2008.

On average, 76 percent of registered voters turned out at the past two Presidential elections, according to the Secretary of State’s website.

Before Election Day, Democrats attempted to block a new Arizona law that makes it a felony for anyone other than a family member or caregiver to collect a mail-in ballot on another’s behalf. Democrats said it would hamper their traditional outreach methods to minority voters. The 9th U.S. Circuit Court of Appeals and the U.S. Supreme Court both upheld the amendment. In his dissent for the 9th Circuit Court, Chief Judge Sidney Thomas said that the law added “disenfranchisement” to the list of challenges faced by the minority voter. But Secretary of State Michele Reagan wrote in an emailed statement that the amendment would “significantly enhance the integrity of the outcome of our elections.”

At several rallies this year, Republican nominee Donald Trump called for his supporters to watch the polls for any signs of voter fraud. His website included a form for potential “election observers” to volunteer their services.

Democrats worried this rhetoric would encourage voter intimidation at the polls. On October 30, the Arizona Democratic Party filed a lawsuit against Trump and the Arizona Republican party for allegedly “conspiring to threaten, intimidate, and thereby prevent minority voters in urban neighborhoods from voting in the 2016 election.” Representatives for the Arizona Republican Party called such claims “ludicrous” and suggested Democrats had timed the suit to distract attention from the FBI’s investigation into Democratic nominee Hillary Clinton’s use of a private email server while she was secretary of state.

To combat potential voter intimidation, organizations such as the Arizona Advocacy Network trained poll watchers of their own to be on the lookout for scare tactics. And on November 2, Secretary Reagan issued some official “guidance” to prevent voter intimidation or discrimination on Election Day. The two-and-a-half page document included a reminder that any authorized poll observers “are there to do just that: observe.” Reagan also listed forms of “intimidating conduct” which are prohibited, such as confronting or questioning voters, aggressively displaying weapons or posting signs about penalties for voter fraud.

Elizabeth Bartholomew, spokesperson for the Maricopa County Recorder’s office, said she expected both the Democratic and Republican parties would be enlisting “large numbers” of poll observers on Election Day. For proper authorization, each volunteer would need to carry a signed letter from the county party chairman allowing that individual to be a political observer.

Bartholomew said there’s no limit to the number of poll watchers each party can send out in Maricopa County, but no more than one per party may be in each polling place at a time. The volunteers would have other restrictions as well.

“They can’t be looking over voters’ shoulders,” Bartholomew said, adding that poll watchers can speak to the inspector at the polling place, but not to anyone else.

Bartholomew said the Department of Justice would also likely send observers to polling places, as they usually do during Presidential Elections. Neither the Democratic nor the Republican party in Arizona had reported to the Maricopa County Recorder the number of poll watchers they planned to dispatch on Election Day.

After the Presidential Preference Election in March, many voters and state officials leveled criticism at Maricopa County Recorder Helen Purcell for long lines that kept some waiting to vote until just after midnight. In an effort to save money, Purcell’s office had downsized the number of polling places from 200 locations in 2012 to 60 this spring.

Voting rights advocates said the situation was a sign of voter suppression and called for renewed federal oversight of state elections. This year marks Arizona’s first Presidential Election without federal oversight in 50 years, after the Supreme Court overturned Section 5 of the historic Voting Rights Act in 2013. Introduced in 1965, Section 5 required select states, including Arizona, to obtain clearance from the federal government before implementing any changes to the voting process.

In response to the Presidential Preference election debacle, the number of polling places in Maricopa County jumped to over 700 at the September Primary Election. But what started as a breezy day at the polls turned into a trying evening, as the Secretary of State’s new online results page experienced multiple crashes and delays.

Correction: A previous version of this story incorrectly reported that three high schools had walked out on Tuesday.