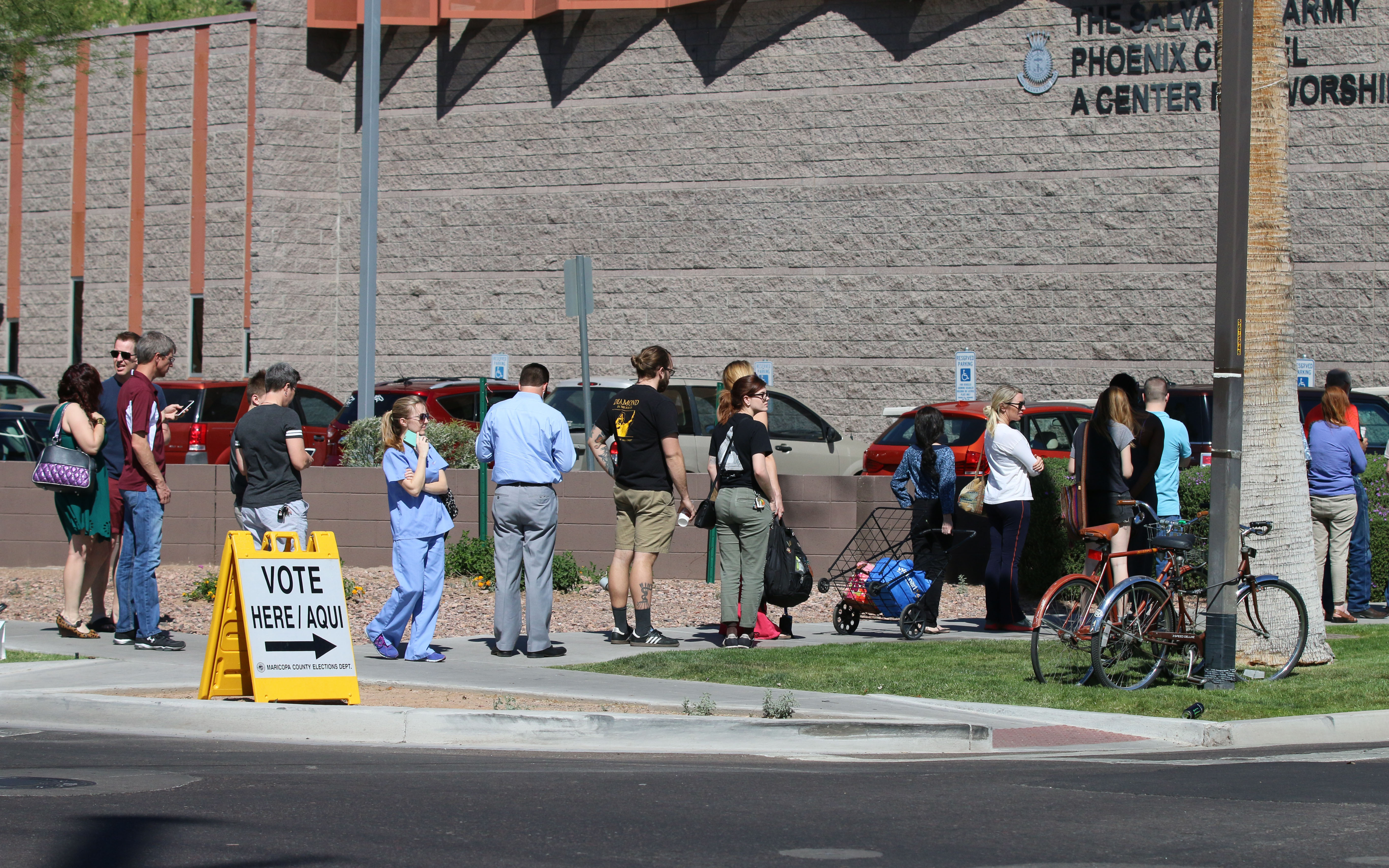 The reason for the long lines is the number of independent voters making their way to the polls despite their ineligibility, said Elizabeth Bartholomew, communications manager at the Maricopa County Elections Department. (Photo by Grecia Drabos/Cronkite News) 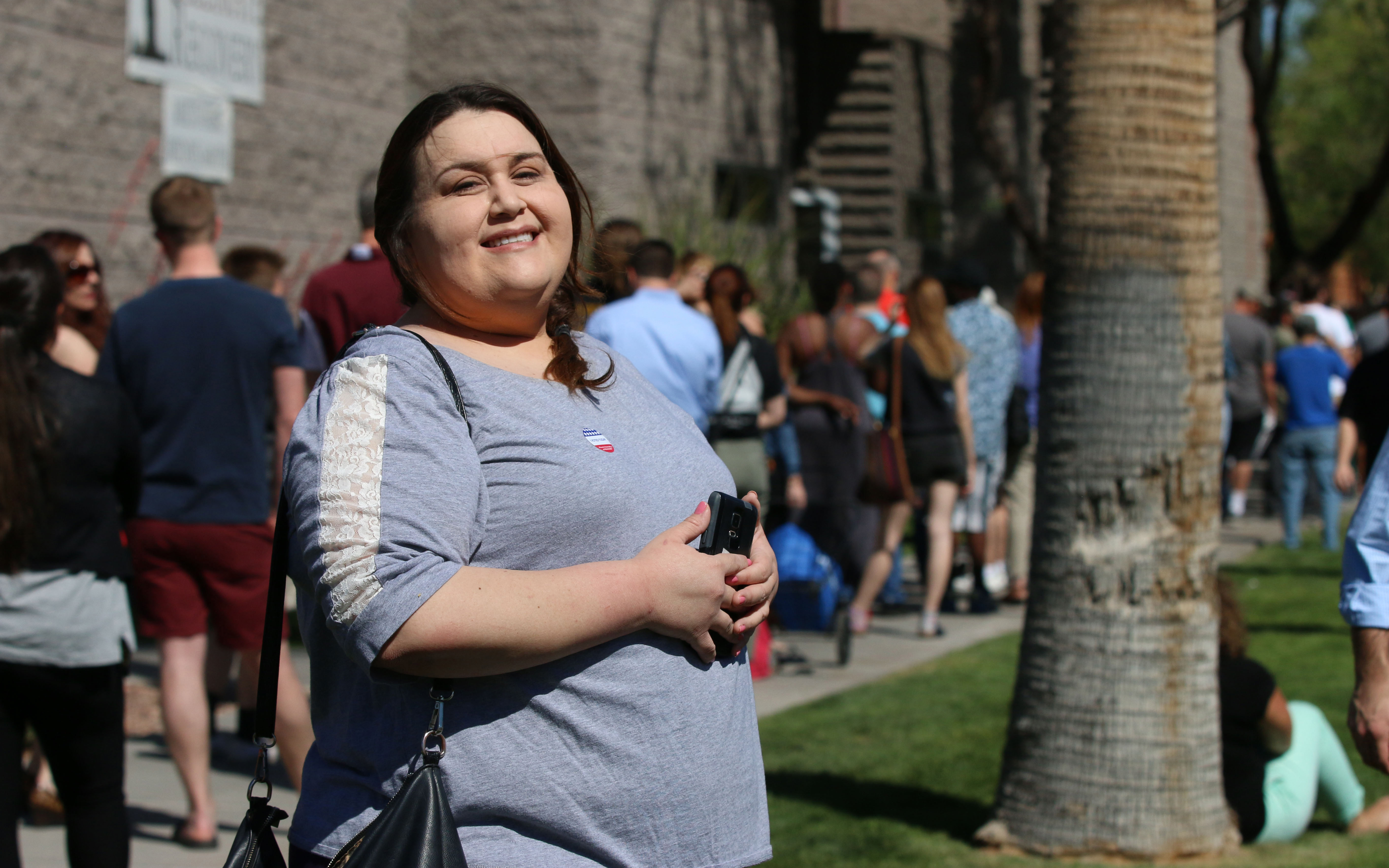 Adrianna Lugocarrillo said it took only five minutes to vote at the Salvation Army’s Phoenix Citadel Corps polling place in downtown Phoenix, but she had to wait in line for an hour.
(Photo by Grecia Drabos/Cronkite News) 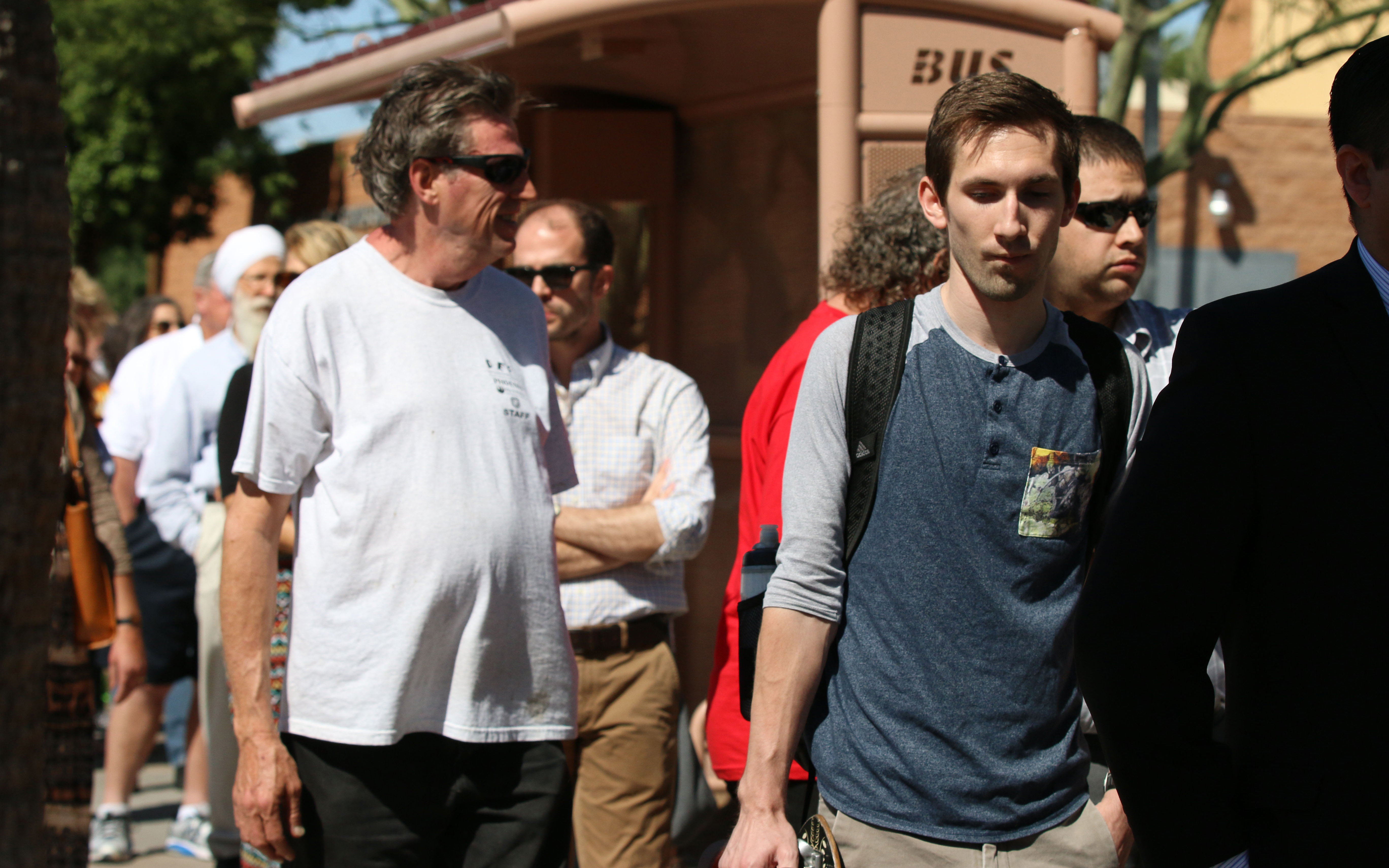 Dana Johnson (left) waited in line at the Salvation Army’s Phoenix Citadel Corps near downtown Phoenix. He had only waited for about five minutes, but he said it looked like he had about an hour to go before he could vote. (Photo by Grecia Drabos/Cronkite News)

People wait to vote for the Arizona primary election outside a polling station in downtown Phoenix on Tuesday, March 22.
(Photo by Miguel Otarola/Cronkite News)

Shuya Ohno, the campaign director for the national Right to Vote Initiative, was told that the county has had 200 polling stations open in the county for the preference election in the past.

“The fact that people are waiting two hours or more is really inexcusable on the part of (Maricopa County Recorder Helen Purcell),” Ohno said.

Elizabeth Bartholomew, communications manager at the Maricopa County Elections Department, said the reason for the long lines is the number of independent voters making their way to the polls despite their ineligibility.

“There’s going to be long lines. People have to plan for that,” Bartholomew said. “A large number of independents are showing up to the polls, and when they find out they can’t vote, they may be upset. If independents are there, it takes time to explain to them why they cannot vote.”

Ohno said Purcell claimed the county cut down on the polling locations to “save money.”

“I’m sure I would take her at her word, but I think what she’s done, in order to save money, has passed the cost on to the voters,” he said.

Roopali Desai, an election attorney for local law firm Coppersmith Brockelman, said the county was able to dramatically reduce the number of polling places due to recent changes to the Voting Rights Act of 1965, brought on by the 2013 Supreme Court decision in Shelby County v. Holder.

Shelby County v. Holder concerned the process for states with a history of discrimination to make changes to their election process with approval from the federal Department of Justice.

In the last presidential election, counties in Arizona had to go through federal review before making changes to the local voting process. But this time around, Desai said, Maricopa County could make changes without any review of impact into how it could affect voters.

The lack of polling locations particularly affects underprivileged communities, who have limited access to transportation, she said.

“This creates additional obstacles for them because most people can’t take three hours off to work to stand in line and vote,” Desai said.

Ohno and Desai said they spoke to “hundreds” of voters today to gather anecdotes about their wait times, and are collecting data to consider taking legal action on how the number of polling locations affected Tuesday’s vote.

During the general election in November, the department will have 724 polling places open, which is about twelve times more than the 60 available Tuesday.

Tempe Mayor Mark Mitchell urged Tempe voters to stay patient and reminded them that the county, not the city, decides on the number of polling locations.

Voter Leslie Sonnenklar showed up to the Salvation Army’s Phoenix Citadel Corps polling place in downtown Phoenix Tuesday morning. Sonnenklar, who had injured her foot, had to take a break and sit down under a nearby tree while strangers held her place in line.

She said she had waited for about 45 minutes, and the line had wrapped around the building.

“Oh my God,” he said. “It’s just interesting that it is so noteworthy so many people are coming out to vote for this election, and it’s so exciting.”

He said he’s a regular voter, but “this type of line is going to make me consider early voting, for sure.”

Later in the day, the location had a line wrapping around the block, with people waiting longer than one hour and a half to enter the building.

“Turnout has been good and strong,” said Matt Roberts, a spokesman with the Arizona Secretary of State’s Office. “Polling places are processing pretty well, and we haven’t heard of any problems.”

She said otherwise, they didn’t have major problems and expected high turnout.

“From what I’m hearing, voting is pretty steady,” she said. “I say over 50 percent turnout if it keeps steady.”

Of the about 852,000 early ballots requested, about 55 percent or 471,000 of these ballots have been turned in, Bartholomew said. Those who have yet to turn in their ballots can do so at one of the polling places today.

One Maricopa County resident, Amy Vynalek, changed her party preference about six weeks prior. She received two early ballots in the mail, one for the Democratic primary and one for the Republican.

In this situation, Maricopa County Recorder Helen Purcell said the voter can only turn in the ballot for the party for which she registered.

In the 2012 presidential preference election, voter turnout was 45 percent. However, only the Green and Republican parties had candidates on the ballot since President Barack Obama represented the Democratic party.

In 2008, turnout reached 51 percent when voters had a choice between Obama and Hillary Clinton on the Democratic side and John McCain and Mitt Romney on the Republican side.

Maricopa County voters can drop off their mail-in ballots or vote in person at any of the county’s 60 polling places. To find a polling place, go to recorder.maricopa.gov/pollingplace.