The view of the Grand Canyon from Havasupai Hilltop. The trail snakes along the bottom of the canyon. (Photo by Bri Cossavella/Cronkite News) 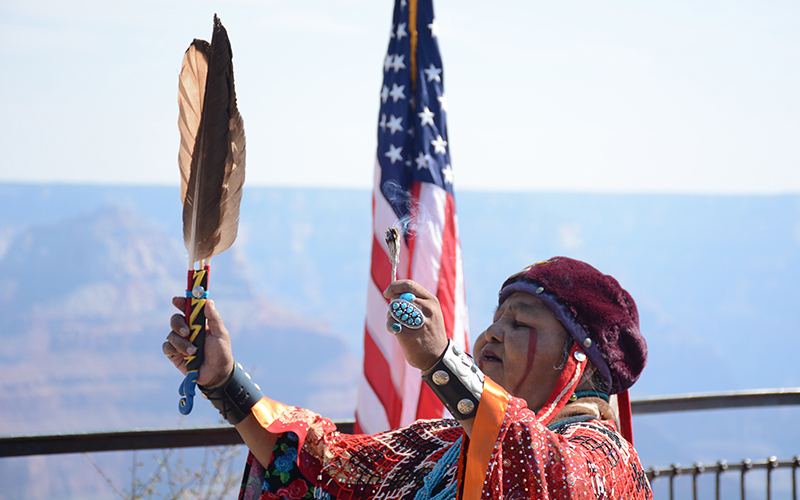 A member of the Havasupai Tribe performs a traditional ritual during a naturalization ceremony in August at Grand Canyon National Park. (Photo by Bri Cossavella/Cronkite News) 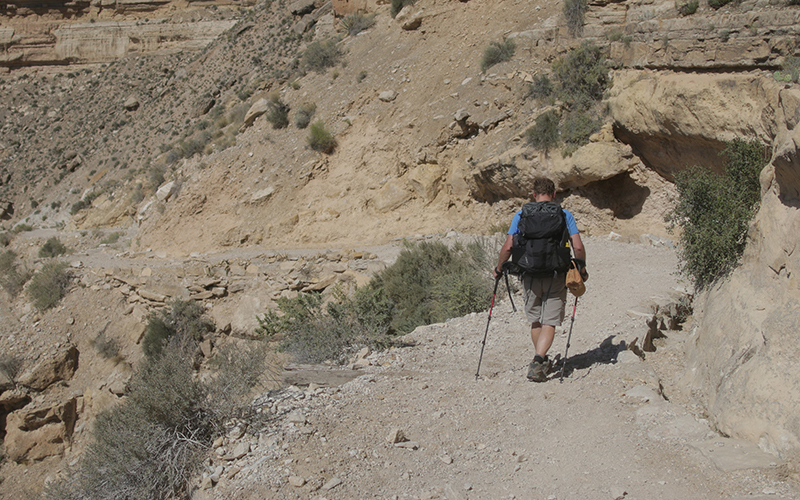 Matt Rudig, a Coconino County official, begins his 8-mile trek to the Havasupai Tribe’s village at the bottom of the Grand Canyon. He set up a polling station for the tribe for the 2016 Arizona primaries. (Photo by Bri Cossavella/Cronkite News)

GRAND CANYON – Matt Rudig stands on Havasupai Hilltop and looks down at the landscape of the Grand Canyon. He laces up his hiking boots and situates his backpack in preparation for the 8-mile hike ahead of him. Deep within the gorge is the Havasupai Tribe’s village – his destination.

Rudig, who works for Coconino County, volunteered to set up polls for the tribe for the 2016 primaries.

Another volunteer from the county, Margaret Penado, will do it again on Nov. 8 for the general election. This will be her first trip.

That means about a 3.5-hour hike down the canyon, 12 hours monitoring the polls, two overnight stays and then the hike back out. The office makes the trek to serve about 100 registered voters, county officials said.

Coconino County officials said they’ve sent somebody down to the Havasupai Indian Reservation – a tribe of about 450 people living on the southwest region of the Grand Canyon, according to an Arizona State University report – for every major election since 1968.

For voters on tribal reservations, getting to the polls may be just the first hurdle

In 1967, 50 tribe members petitioned the Coconino Board of Supervisors to provide them with a polling location on election days. The supervisors unanimously approved the move, said Patty Hansen, the county’s recorder.

“These folks deserve a chance to show up on election day and vote just like anybody else,” Rudig said.

Election officials said they started providing polls in the canyon after Congress passed the 1965 Voting Rights Act, which banned racial discrimination in the voting process on federal, state and county levels.

Various tribes and representatives have sued the state regarding literacy tests and the state’s voter ID law, which prevented tribal members from voting if he or she didn’t speak English or didn’t have proper identification, according to an article in the Arizona State Law Journal.

They also challenged Arizona’s new law that makes it illegal to collect other people’s ballots. A federal appeals court recently upheld the law.

Some minority groups, like Native Americans, rely on ballot collection to ensure their vote gets cast, according to the a court opinion. However, state officials said the law enhances the integrity of the voting process, according to a Cronkite News article.

In Coconino County, officials said they make it a priority to provide all residents with an accessible polling location, Hansen said. This includes those living in remote, rural areas like the Havasupai Tribe.

County officials work closely with Native American residents to make the voting process as convenient as possible, even if that means hiking 8 miles into the Grand Canyon, Hansen said.

Before 2004, the county used a punch card system, which required the volunteer to hike out of the canyon after the polls closed. Weather conditions complicated the process and sometimes recorders didn’t start counting until 2 a.m., said Candy Owens, the county’s former recorder.

Now, county officials use touchscreen equipment to cast the ballots. All equipment, like the voting booth and signature rosters, are flown in by helicopter prior to voting day. Once a vote is cast, it’s telephoned into the recorder’s office and counted.

Hansen said tribe members had expressed concern that their votes weren’t being counted because the equipment isn’t flown out until a day or two after. But, county officials sent outreach members to the village to explain how the process works.

Overall, Hansen believes the relationship between the county and the Havasupai Tribe is a positive one.

Members of the Havasupai Tribe did not respond to multiple requests for comment.

The tribe has been calling the canyon home for the past 800 years and the phrase “Havasupai” translates to “the people of the blue green waters,” according to one website devoted to planning trips to national parks.

The Colorado River that flows between the canyon walls of their land projects aqua colors and travels through a series of majestic waterfalls.

The reservation is 5 miles long, 12 miles wide and 518 acres, according to an intertribal council website.