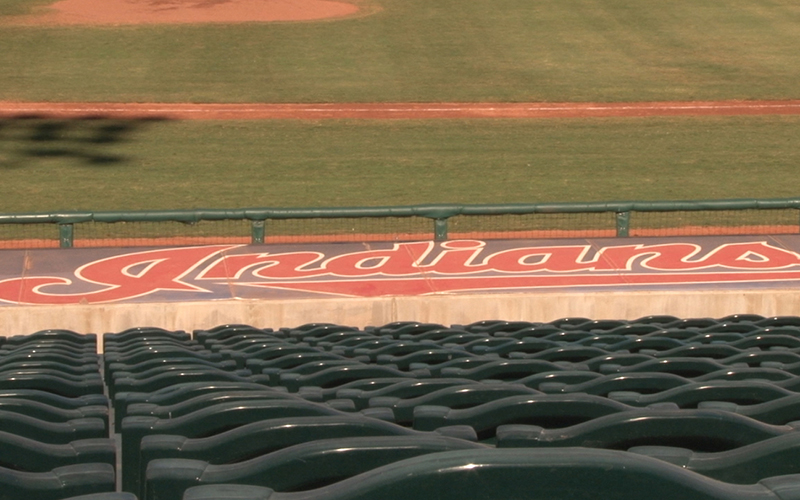 The Inidans have already seen a big boost in their season ticket sales for spring training last year. (Photo by Tamsyn Stonebarger/Cronkite News)

Both teams’ spring training headquarters are in the Valley – the Cubs at Sloan Park in Mesa and the Indians at Goodyear Ballpark, which they share with the Cincinnati Reds.

“It being both Cactus League teams is great for the Cactus League,” said Debbie Diveney, the marketing and business operations coordinator at Goodyear Ballpark.

“It was actually our highest spring training attendance,” said Tara Combs, sports, tourism and special events division manager for the city of Surprise. “We had a huge out-of-state crowd and you could see that with our ticket sales, because a lot of our ticket sales were done online, which shows people were purchasing out-of-state. We actually get reports through our ticketing system that they are coming from out of Arizona.

“It has put Surprise on the map.”

Goodyear Ballpark stands to benefit the most if Cleveland wins for the first time since 1948. Attendance this spring averaged 5,367 – just 54 percent of capacity.

Diveney has already felt the impact of the Indians magical run in the post season.

“We’ve already seen a 30 percent increase in our season tickets for spring training,” she said. “The more people that come here the more economic impact to Goodyear. We already see over $50 million impact from spring training alone during the season.”

“I’ve seen a difference in each year I have gone to Ohio and the people accepting Arizona and the Cactus League,” she said. “There are many people who say they are coming out.”

An Indians victory would only add to that.

In contrast, the Cubs, who haven’t won a World Series in 108 years, drew an average of 14,549 – the most in Arizona and Florida – representing 97 percent of capacity at Sloan Park this spring.

“We sell out every game, always have,” said Mesa Mayor John Giles. “How do you improve on that? It’ll be exciting to see.”

Even the mayor is caught up in Cubs mania. He spoke to an out-of-town convention group Wednesday.

“All they could talk about was the Cubs,” said Giles, who has a picture of himself and Cubs manager Joe Maddon and a Maddon bobblehead in his office. “It’s a national story and fun to see how it plays out in Mesa. This is a real Cubs town.”

That is never more evident than at the Sheraton Mesa Hotel in the Wrigleyville West development, a stone’s throw from Sloan Park. The hotel’s Stats bar was prepared to host Cubs fans to watch Game 7 on their big-screen TVs.

If the Cubs win, General Manager Dan Dickhart expects “rates (for tickets) will go higher, but it’ll bring more business and more opportunity for us.”

Stats offered Cubs fans $20 T-shirts that read “1907-1908 champs” along with Chicago dogs and Cubbie burgers. A Cubs banner and a white “W” flag hung from the ceiling.

“This couldn’t be set up for a better venue,” said Dickhart. “I’m so excited because of our neighbor, Sloan Park. Who is not a Cubbie fan?”

Jeanna Berg contributed to this story.