TEMPE – Former NBA player and current Suns broadcaster Eddie Johnson was just a kid growing up in inner-city Chicago when he attended his first Cubs game. He spent what little money he had to buy a Pittsburgh Pirates hat to be just like Roberto Clemente, his favorite player.

Then, he tried to get the autograph of Ted Abernathy, a pitcher for Chicago.

“He said, ‘Gimme that hat.’ I handed him the hat and he took his hat off his head, signed it and he gave me a ball, but he kept the hat,” Johnson said. “It hit me and I just fell in love with that team right away.”

Johnson and other Cubs fans like him who have relocated to the Valley had been waiting years to see their beloved “Cubbies” in the World Series, 71 to be exact, before the team advanced to the Fall Classic against the Cleveland Indians in a series the Cubs trail 2-1.

For Jerry Colangelo, a Chicago native credited with the growth and success of professional sports in Phoenix, the long-awaited return to the World Series is about business more than his fandom from growing up in Chicago.

“I was once in baseball and had my own team, the Arizona Diamondbacks, and we did win the World Series in our fourth year,” Colangelo said. “So my interest in the Cubs today is for the city of Chicago and their fans who have been waiting over a hundred years for the Cubs to get that accomplishment.”

Colangelo was a managing partner of the Diamondbacks and owner of the Phoenix Suns and the Arizona Rattlers. He helped create the Jerry Colangelo Sports Business School at Grand Canyon University. He’s currently the president of USA Basketball and a special advisor to the Philadelphia 76ers.

Ten years ago, he almost added Cubs ownership to that list. In 2006, Colangelo was gathering a group of investors to buy the Cubs, but he said it became apparent to him that the franchise was going to be sold to the highest bidder, like an auction, and his interest died.

“It was part of me being nostalgic, because for me, it would’ve been full circle,” Colangelo said. “I started in Chicago and it would’ve ended in Chicago, but that wasn’t meant to be.”

Arizona is full of displaced Cubs fans, many of whom pack Mesa’s Sloan Park, the team’s spring training home and where some of the franchise’s top prospects currently play for the Mesa Solar Sox in the Arizona Fall League.

Joyce Williams has been traveling to Arizona from Wisconsin for the last 13 years to escape the cold front in the Midwest. She regularly attends games at Sloan Park to support the Cubs and their prospects, but she’s concerned a championship wouldn’t be good for her hometown.

“I’m afraid they would burn Chicago down and I would have nothing more to hope for,” Williams said. 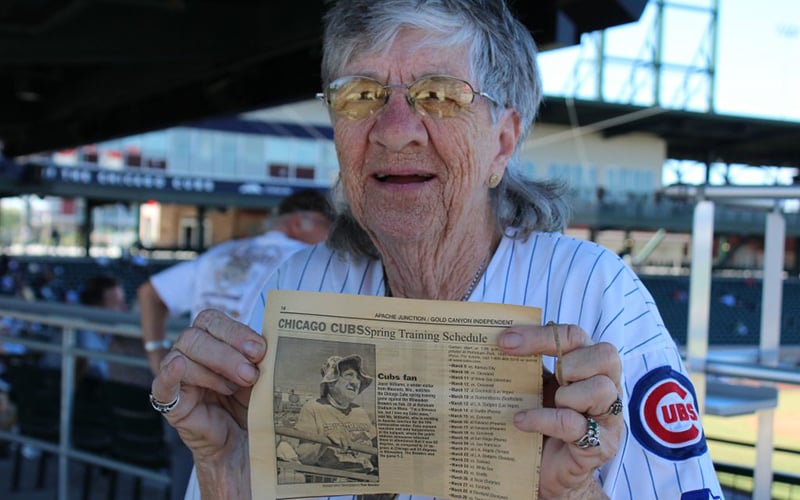 Joyce Williams, 80, has been recognized by the media before for being a dedicated Cubs fan and this year is no different. (Photo by Trisha Garcia/Cronkite News)

Although the 80-year-old has been supporting the Cubs for over 60 years, she holds an unpopular opinion among fans.

Most fans want to see the drought end. Most fans have waited their an entire life for the Cubs to be in the World Series again, and they only want one outcome – a parade in downtown Chicago.

“It’s extremely emotional for me. I didn’t think it would ever happen in my lifetime,” Johnson said. “But lo and behold, they’re there now and it’s one of the greatest feelings I’ve ever had as a fan.”

Until now, it had been 71 years since the team had appeared in a World Series and 108 years since they’ve won one, but the north side team from Chicago has the chance once more.

Al Maag, 67, went to Chicago to experience that in person. Maag and his wife have been season ticket holders for 32 years and they returned to Chicago for the Cubs three home games in the World Series after watching the team win the NLCS in person last weekend.

“You keep going, ‘I can’t believe some of these teams, including the Arizona Diamondbacks, won in their second or third year,’ and we’re going c’mon It’s 100 years for us,” said Maag, a lifelong Cubs fan and Valley resident.

Maag said being a Cubs fan runs the gamut of emotions.

“I can’t show you the scars, but I should just show you all of my blood pressure pills that I take now,” Maag said. “I even asked my doctor if I should double up on them while I watch the games.”

Maag described “Cubbie blue” as a fabric of Chicago’s culture and a staple in his life, but if they don’t win before he dies he has a clause in his will instructing his wife to run an ad in the Chicago Tribune that reads, ‘‘C’mon you guys couldn’t have won in 67 years,'” Maag said. 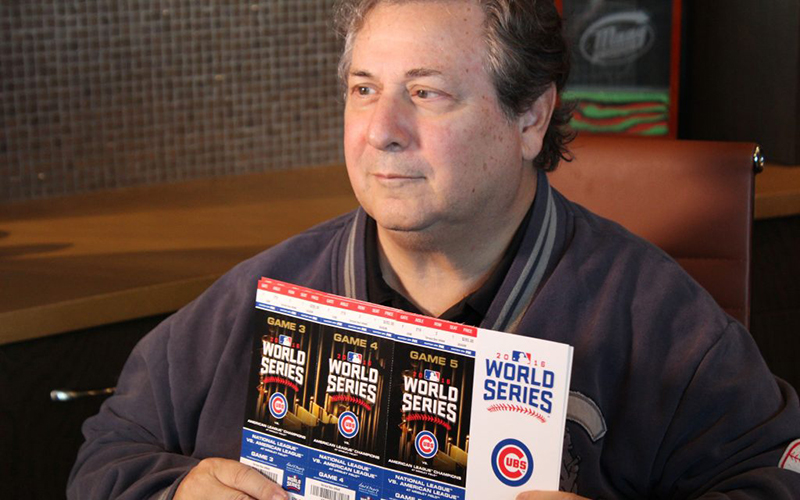 Al Maag, a Cubs season ticketholder, will be returning to Wrigley to catch some World Series action. (Photo by Trisha Garcia/Cronkite News)

For now, the clause in Maag’s will is on hold as Cubs fans all over the world are holding their breath and hoping for a World Series win.

Even Colangelo hopes he is watching history in the making this year. “But they need to win for that to come to fruition.”

Whether the baseball world is witnessing history or not is to be determined, but Chicago fans are holding out hope.

“We’ve waited this long to see the team perform in the World Series,” Johnson said. “When it’s all said and done, we’re gonna celebrate again because they’re gonna win it.”