Scottsdale Scorpions outfielder Tim Tebow watches from the dugout during the team’s matchup against the Surprise Saguaros, Wednesday, Oct. 19 in Scottsdale. (Photo by Nicole Vasquez/Cronkite News)

As a former pro quarterback, he knows the drill. Tebow has always been a lightning rod. He won a Heisman Trophy and a national championship at Florida. He spent time in the NFL, once leading the Denver Broncos to a playoff victory. And he continues to serve as a college football analyst.

But this time, he was speaking as an outfielder for the Scottsdale Scorpions and the questions are about his role in an Arizona Fall League matchup against the Surprise Saguaros.

Tebow signed a minor league contract with the New York Mets in September and was assigned to the Fall League, which includes many of the top prospects in baseball.

“Baseball is something I’ve enjoyed since I was 4 years old,” Tebow said. “I almost (decided to play) as a professional coming out of high school. It’s something that never really left me.”

Although he wears the uniform of a baseball player, including a Scorpions cap and Mets jersey, he still gets football questions, such as the one a reporter asked about the rivalry between Florida and Georgia.

Another reporter asks about his bandaged and bruised right hand. The 29-year-old shrugs it off and smiles.

Paul Jensen, media consultant for the Fall League, has been busy juggling requests for Tebow from media outlets in New York to those in the Valley.

“This is a high level of baseball, just younger players,” said Jensen. “Tim’s getting a taste of it. Baseball is a day-in, day-out grind. Football is a crescendo. Then after the game, the sound goes down. Then it builds up all week. But in baseball, you have to be level.”

Tebow joins the ranks of up-and-coming MLB prospects that have the potential to become household names. The last time the AFL saw a multisport superstar was when Michael Jordan took a break from his Hall of Fame NBA career with the Chicago Bulls and was assigned to the Scorpions in 1994 as a Chicago White Sox prospect.

“He’s a national figure,” Jensen said of Tebow. “His teammates are getting a kick out of having him. Players from opposing teams seem anxious to shake his hand after the game, and he’s happy to talk to them. With the fans, he’s wonderful. He responds.”

Tebow is 2-for-20 but that hasn’t stopped his presence from being felt in the Fall League.

Last season, the Scorpions drew an average of 504 fans per game at Scottsdale Stadium. On Oct.12, for the team’s home-opener against the Salt River Rafters, there were 1,790 fans on hand. 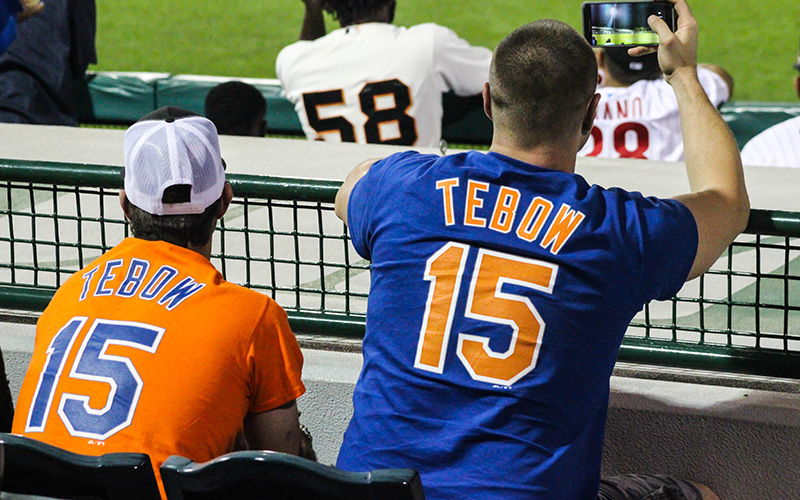 Dave Hansen and his brother James watch Tim Tebow bat during the 8th inning of the Scottsdale Scorpions game against the Surprise Saguaros, Wednesday, Oct. 19 in Scottsdale. (Photo by Nicole Vasquez/Cronkite News)

Fall League games with Tebow have drawn an average of 1,159 fans through five games, according to MiLB.com.

The closest team to that attendance number is the Rafters, which includes prospects of the hometown Diamondbacks, who are drawing an average of 738 per home game.

“I think it’s the curiosity factor,” said Steve Cobb, director of the AFL. “He has a following from his Heisman days, to his NFL days, and now those same people are curious about him now that he’s playing a different sport. It allows people to discover the Fall League and all the good players that we have here.”

Tebow won’t admit that he’s the cause for the hype.

On Wednesday, Tebow finished speaking to the media just one hour before the first pitch. Fans began to filter through the gates to get a spot behind the home dugout – and the chance to be only a stone’s throw from the Heisman Trophy winner.

New York native Dave Hansen and his brother James were two of the lucky ones to snag a front-row seat.

“(Tebow) is James’ man-crush,” said Dave Hansen, who describes himself as a die-hard Mets fan. “He has all of his jerseys.

“I didn’t think (Tebow) would ever wear a football uniform again let alone a baseball uniform. He’s a big name in sports, whether he plays or not. You have the chance to spend $8 on a general admission ticket to see a big-name person like Tim Tebow, you jump at it.”

The Hansen brothers saw Tebow notch his second hit of his AFL season – a single to left field.

Fans made their way to lean over the right-field rails, with hopes of shaking hands and snagging an autograph.

Some wear “15,” his number, and hold Gator helmets. Others clutch photos of him during his Denver Broncos playing days, kneeling on one knee, his head on his fist.

“Just hearing the news that Tim’s going to be in town, as a Gator fan supporting him, was awesome,” Sierra said. “To see him and what he does, through all the trials he’s been through, is an inspiration. Everyone kind of puts him down – I’m sure he hears it – but he just keeps going.”

Cobb says that it’s still too early to reach a verdict on Tebow’s performance, but he believes Tebow is in it for the long haul.

“I’ve only met him once, the very first day,” Cobb said. “But I can tell you he’s very serious about this. His work ethic seems to be off the chart, and he wants to succeed. I think anyone that we’re around like that – you’re pulling for him.”