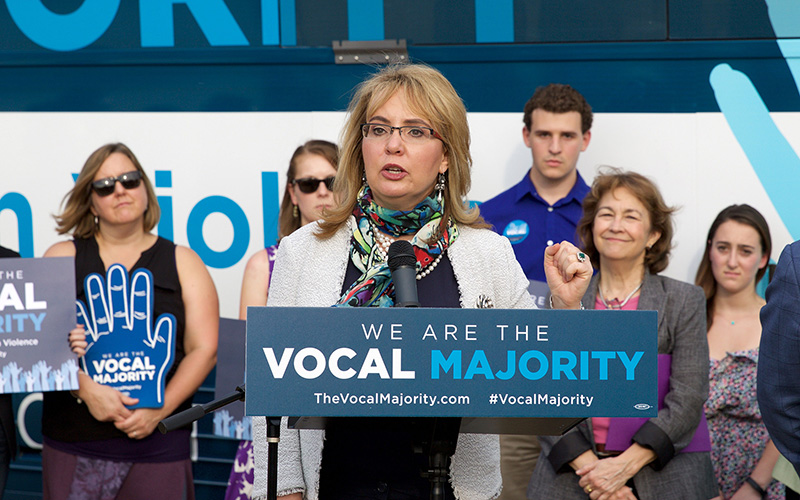 WASHINGTON – In the five years since then-Arizona Rep. Gabrielle Giffords was critically injured in a Tucson shooting that killed six and wounded 13, Congress has been unable to pass gun reforms, her husband said Thursday.

That’s why Giffords and her husband, Capt. Mark Kelly, joined other gun-control activists in Washington to demand reform from Congress and encourage voters to elect lawmakers, beginning with the White House, who will enact what they call sensible gun safety laws.

For Giffords and Kelly, that starts with electing Democratic presidential nominee Hillary Clinton.

“With Hillary in the White House, she will sign legislation into law and we will no longer have to live in a nation that has 33,000 people dying every single year from gun violence,” Kelly said.

The Washington stop was part of the couple’s 14-state Vocal Majority bus tour, which aims to educate citizens on the dangers of gun violence and encourage them to get out and vote on Nov. 8.

An average of 91 Americans are killed with guns each day, according to gun-control group Everytown for Gun Safety. The largest mass shooting on U.S. soil occurred on June 12 when a gunman shot 49 people to death and wounded 53 others at Pulse, a gay nightclub in Orlando.

That shooting sparked a 15-hour filibuster in the Senate, led by Sen. Chris Murphy, D-Connecticut, aimed at forcing a vote on two Democratic gun-safety proposals. One proposal would have prohibited people on terrorist watch lists from obtaining guns and another looked to expand background checks to gun shows and Internet sales.

But Senate Republicans were pushing for two bills of their own: One that would have stopped gun sales for 72 hours to anyone on a terrorist watch list in the last five years, and another that would have expanded background checks to internet sales, but not gun-show sales.

All four measures failed in votes that fell largely along party lines.

House Democrats in late June staged a sit-in on the House floor that stopped all legislative business in an effort to force votes on similar bills. But the Republican leadership adjourned the House and the Democrats gave up their sit-in after 26 hours saying they had made their point, but failing to get a vote.

“Stopping gun violence takes courage, the courage to do what’s right, the courage of new ideas,” Giffords said during Thursday’s news conference. “Now’s the time to come together and be responsible. Democrats, Republicans, everyone.”

After the news conference, Kelly repeated arguments that voters who care about gun reform should elect Clinton next month, saying she has a record of standing up to the gun lobby and a “plan to pass common sense legislation.”

“I’d like to see Hillary Clinton be elected come November and candidates down-ballot that we support get elected,” Kelly said.

As for candidates supported by the gun lobby, he said, “We would like to see them leave and do something else, and if that happens, we can pass some common sense legislation not only at the state level, but also at the federal level.”

Kelly and Giffords have campaigned for gun-safety laws since they founded Americans for Responsible Solutions in 2013, on the second anniversary of her shooting in Tucson and shortly after a gunman killed 20 children and six staff members at Sandy Hook Elementary School in Newtown, Connecticut.

“Americans kind of get used to this and they think it’s normal,” Kelly said of mass shootings. “It’s not normal, no other country like ours has to deal with this problem. That’s something we really need to fix, the first step is people need to register to vote then they need to vote for the right person.”

“We must never stop fighting,” she said. “Fight, fight, fight! Be bold, be courageous, the nation’s counting on you.”