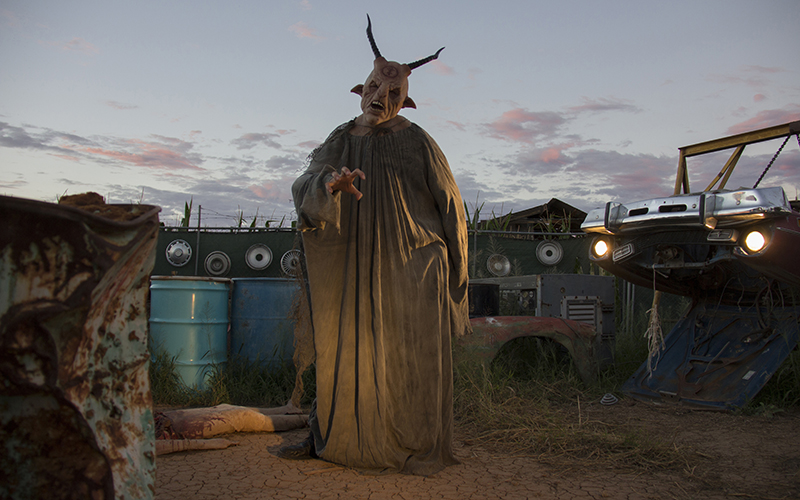 The corn fields at Fear Farm are transformed into something terrifying with sets, actors, costumes, makeup and darkness. (Photo by Ally Carr/Cronkite News)

PHOENIX – Sydney Cox crouches on the ground, hugging her knees, her eyes squeezed shut as a monster looms over her.

The monster revs its chainsaw. In those few seconds, Cox’s brain is hard at work. Her amygdala, the brain’s center for emotions, sends signals to her body, putting her brain on alert and increasing her blood pressure and heart rate. More signals respond to the threat and spur muscle contractions, preparing her to freeze, fight or flee.

Moments later, she screams, running across Fear Farm, the ghoul at her heels. She dodges around people who get in her way, her legs a blur.

“I thought I was going to die,” she says after she finally makes her escape.

When Cox stands in the bright light of the concession booth at Fear Farm, a haunted attraction in the West Valley, she’s smiling.

“I know they can’t touch you,” Cox says. “But it’s still terrifying.”

She is breathing hard, heart racing – and yet she feels relieved and excited.

Fear is such a rush people are willing to pay for it. 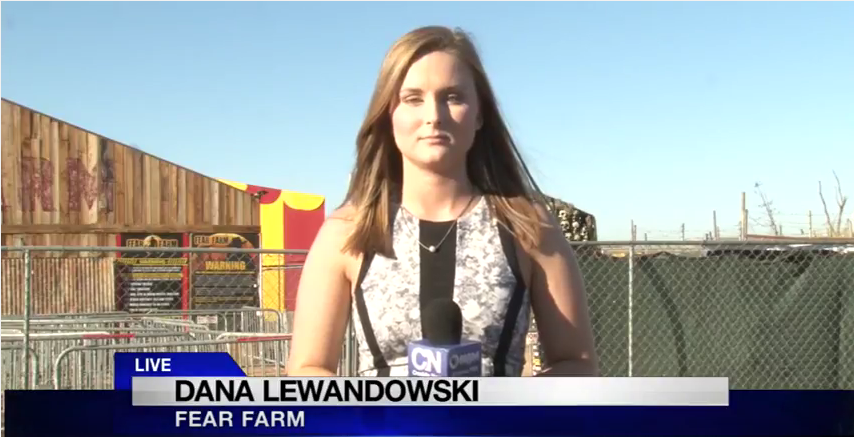 Americans are projected to spend $8.4 billion on Halloween this year, with nearly 36 million people planning to spend some of that money on haunted houses, according to an annual survey from the National Retail Association.

Haunted houses themselves are a billion dollar industry nationwide, according to HauntWorld.com. And the haunted house industry continues to grow.

“Every year there’s new haunts, both in Arizona and across the country, and there are a tremendous amount of people that are looking to find new haunts,” said Cait Russell, the content director at Haunted House Media, an organization that advertises haunted attractions in all 50 states.

In the Valley, more than 45 such attractions have cropped up this Halloween season, according to Russell. At Fear Farm one night, hundreds of visitors waited in line for the haunted corn maze. For two visitors, the wait only added to their fear and anticipation.

“I can feel my heart beating in my fingertips,” said Alex Hernandez when he was only a few feet from the front of the line.

“I feel like I’m going to die,” said Kayla Mada, as they prepared to enter the corn.

“I think it’s just a basic primal instinct, everyone loves to be scared,” said Zack Busse, director of Fear Farm. “Everybody loves that feeling. And that’s what brings us and draws us back to horror movies and coming to these haunted attractions. And Halloween just brings that spirit out in most people.”

Understanding the brain shows why people seek situations that scare them.

“It’s a so-called fearful situation, because you’re in a haunted house or a scary movie, so you get to feel the rush that you would get in a situation of danger, but you know no harm is going to come to you,” said Joseph LeDoux, a neuroscientist at New York University who has studied fear for about 40 years.

People respond the same way to fear and exhilaration: The heart pounds, the palms sweat, the hormones travel through the bloodstream. The only difference between the two responses is how the subject perceives the situation.

Facing a challenging situation, like jumping off the high dive or preparing for a battle, leads to an intense physiological arousal in the body. The body releases hormones like norepinephrine, which prepares the brain and body for action. Epinephrine, or adrenaline, gets the heart pounding, and cortisol increases blood sugar.

“It’s not about the hormones, it’s about the interpretation that’s applied to the hormones,” LeDoux said. You will interpret the feelings as fear if “you find yourself in a situation you’ve identified as being one of danger as opposed to one of exhilaration.”

Haunted houses are exhilarating because the danger isn’t real. The 13th Floor in Phoenix features two haunted houses inside a shopping center. One takes visitors through a haunted mansion and a dizzying spiral through insanity, and the other is overrun by a zombie horde.

On a recent night, people emerged from the exit in clusters. For some going to a haunted house was just something to do on a Sunday night. For others it was therapy.

“I have really bad anxiety, so going through stuff like that helps me to, if anything, get rid of real fears, and face them,” said 16-year-old Bella Dahm. “You know it’s fake, so it’s fun to just go and have fun with it rather than let yourself be scared.”

Dahm and her family go to different haunted houses every year. Each time she faces her fears.