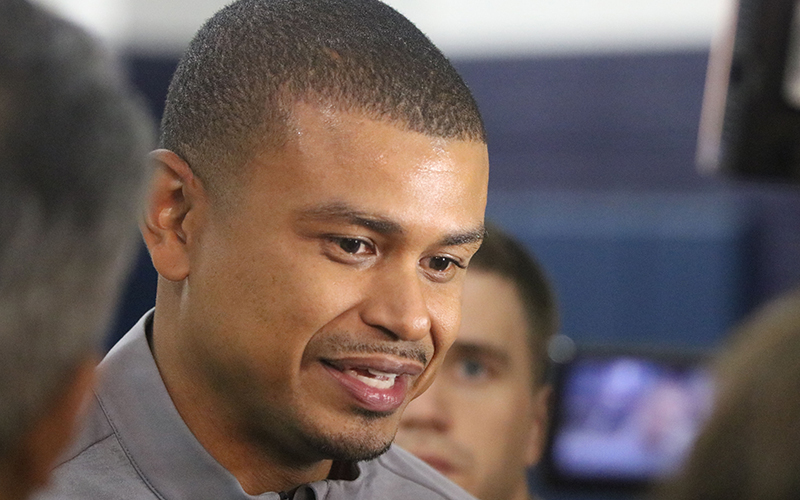 PHOENIX – Earl Watson’s father was one of the first African-American men to join the integrated Army, as mandated by President Harry Truman in 1948. So, Watson was taught from an early age to respect the flag.

“If it wasn’t for my father’s discipline, if it wasn’t for his strong conviction to his country, I would not be where I am today,” said Watson, now the coach of the Phoenix Suns.

A half-century after the civil rights movement, athletes are protesting police brutality, gun violence and social injustices by kneeling or raising fists during the national anthem.

“That (injustice) has to be fixed, like yesterday, like 20 years ago fixed,” Watson said. “Not just recently – there’s nothing recent about it.

“But when you talk about honoring that flag, to me, it’s two separate things.”

NBA rules prohibit such actions, mandating players stand during the national anthem. In the early preseason, players have followed the rules but linked arms to demonstrate unity.

“I definitely want to participate, and my whole thing is I want it to be more as a team,” Dudley said.

“As a team I guess that’s something we are going to have to talk about,” said Tucker, whose father and uncles served in the military.

“Love doesn’t have a race. What is the color of love? I don’t know, it’s just love.”
Phoenix Suns coach Earl Watson

Alan Williams has declined to talk about his mother’s role, but Watson is excited about the opportunity she presents to his team.

“We have the most amazing opportunity to work with Alan’s mom, the chief of police, to come up with some solution to capture our community first,” Watson said. “And maybe we become the leaders and the example of what to do and how to do it. Not follow the mass. I think our opportunity is the most unique.”

The problem isn’t new, said Watson. But he has chosen a different approach to the issue.

“Awareness is a must,” Watson said. “Having an action that follows that awareness is more important.”

Watson and a partner own Earl Watson Elite, an AAU program that plays in the Under Armour Association. The program, which includes 27 travel teams for players from second grade up to 11th grade, provides a platform for players to learn more than basketball.

“We want to unify kids of all races, all religions, and just show them that unification is the way,” Watson said. “Build better people.”

Watson also started a preschool in Kansas City, Kansas, where he grew up and attended high school. Earl Watson Early Childhood Center is home to about 100 children from different backgrounds.

“As athletes, the awareness is positive and a must because we have that platform to not just bring awareness to gun violence or police brutality but also other things like education, civil rights – which to me is exactly the perfect word for it. It’s civil rights,” Watson said.