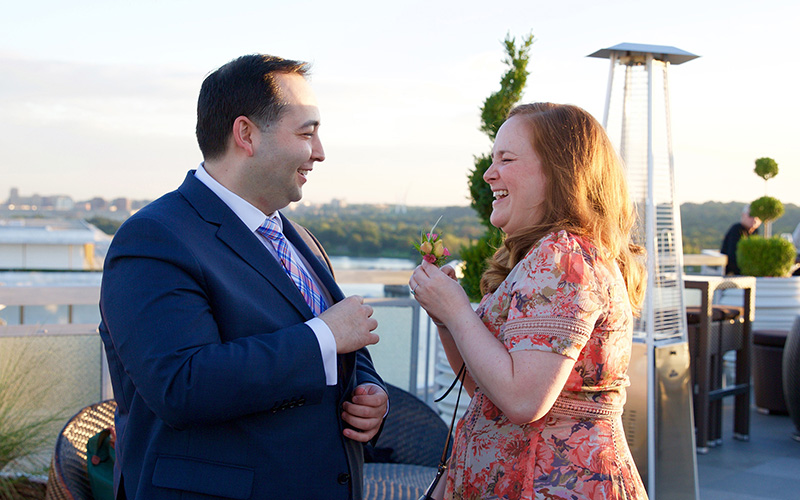 Courtney Singer pins a boutonniere on her groom, Jason Samuels, during their wedding on top of the Watergate after their service in South Carolina was scrubbed by Hurricane Matthew. (Photo by Jessica Suerth/Cronkite News) 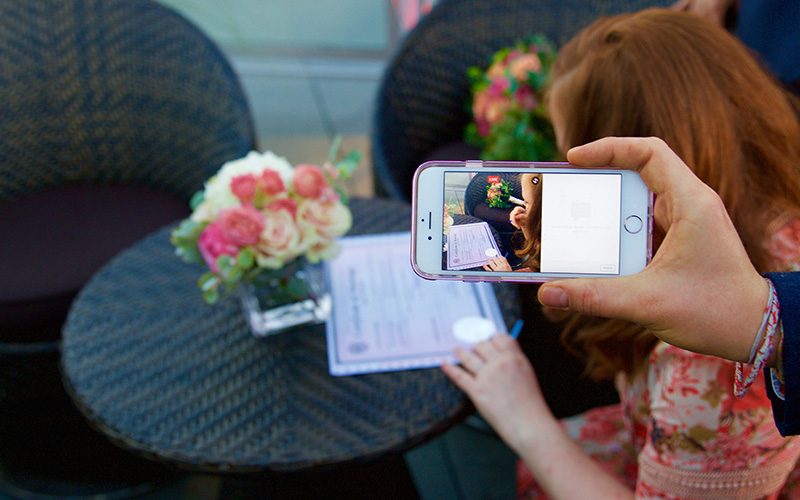 Jason Samuels and Courtney Singer sign their wedding certificate, a milestone streamed on Facebook Live to family members who could not make it to their rescheduled ceremony. (Photo by Jessica Suerth/Cronkite News) 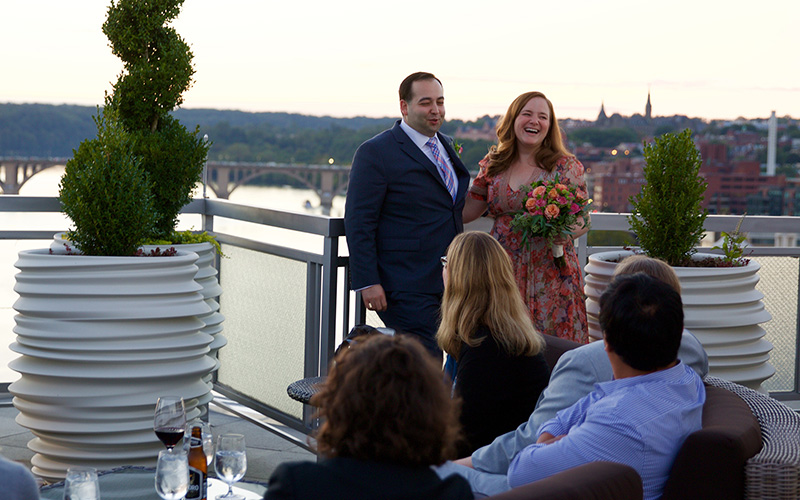 With the Potomac River in the background, friends gather for the wedding of Courtney Singer and Jason Samuels that they helped pull together at the last minute. (Photo by Jessica Suerth/Cronkite News) 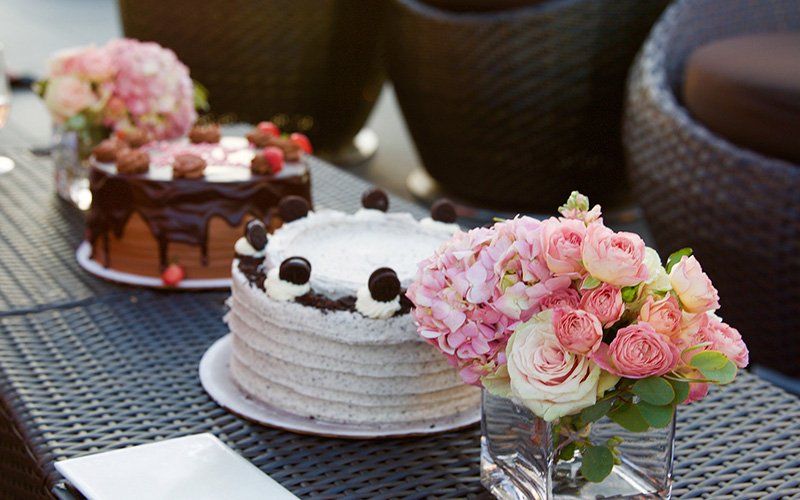 Two cakes and flower bouquets were part of the last-minute decorations friends pulled together for the rooftop wedding of Jason Samuels and Courtney Singer. (Photo by Jessica Suerth/Cronkite News)

WASHINGTON – Saturday was supposed to be the most special day in the lives of Jason Samuels and Courtney Singer, who were set to get married at Singer’s family home in Charleston, South Carolina.

Until Hurricane Matthew stormed in and swept their wedding plans away.

But Singer and Samuels, who is communications director for Arizona Sen. Jeff Flake, were not going to let a hurricane get in the way of their wedding.

In what Samuels called a “Friendsgiving” ceremony thrown together by the couple and their friends at the last minute, the self-officiated wedding went off Thursday night on the rooftop of the Watergate in the heart of Washington, D.C.

About 30 of the couple’s friends gathered on the rooftop of the Watergate, which was decked out in flower bouquets that replicated the bride’s colors, champagne and a cake that read “Courtney and Jason #Official.”

Not having family there in person was “hard to take,” Samuels said, but thanks to Facebook Live, far-away family and friends – including Singer’s family who were riding out the storm from an inland city in South Carolina – were able to be part of the ceremony.

Lisa Farley, one of Singer’s oldest friends in Washington, said the invitation had noted the fickle October weather in South Carolina, with the original wedding website saying anything could happen, even “blustery with a side of hurricane.” Singer had even joked about the unlikely chances that a hurricane would form this weekend – the exact same weekend that Hurricane Joaquin struck in 2015.

Farley, who hopped a red-eye flight from San Francisco on Wednesday night, said the entire impromptu ceremony came together in just 24 hours over a text-messaging application.

“We have a WhatsApp thread and people were like, ‘Why don’t you just do something impromptu, because you’re going to sign the (marriage) certificate anyway?'” she said. “So some of our friends got cakes, flowers, and it just kind of coalesced.”

The formal wedding ceremony is still planned for Charleston, just pushed back to April. But Singer said it was important for them to make it legal before they go to Mexico on their honeymoon Monday.

“I just felt like it would just be another vacation and not our special trip to celebrate our marriage” without getting married beforehand, she said.

Despite the last-minute planning. an unrelenting hurricane and the absence of their families, Samuels said getting married to Singer was “absolutely surreal.”

“We’ve really taken something that could’ve been terrible and turned it into something that’s going to be memorable,” Samuels said. “I’m sure we will be telling this story for years to come.”