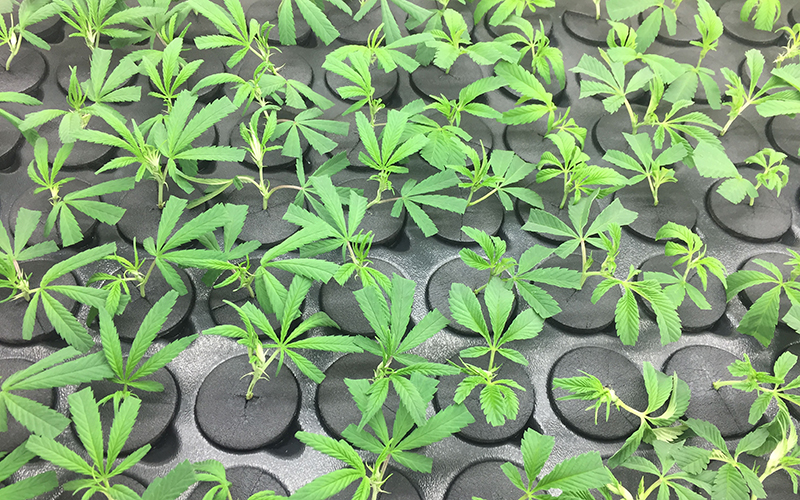 The growing rooms at Giving Tree Wellness Center are filled with marijuana plants. These ones still have a few weeks until they reach maturity. (Photo by Danielle Kernkamp/Cronkite News)

Tell us what you think:

Power’s candidness about her job mirrors changes in the nation’s attitude toward marijuana. According to the Pew Research Center, support for the legalization of marijuana is “rapidly outpacing opposition” – a major change from the 1970s.

In fact, another recent study by the Centers for Disease Control and Prevention indicated that middle-aged parents are more likely to smoke marijuana than their teenage children.

The data shows that marijuana use in teens has declined while usage in adults has surged.

One potential reason for the uptick: More states have legalized both recreational and medical marijuana use.

In Arizona, voters approved of medical marijuana in 2010. Now, the Department of Health Services reports there are nearly 100,000 qualifying patients in the state.

Victor Contreras is one of those patients.

“Being in the Marine Corps, and being a combat veteran, I lost 20 friends in Afghanistan,” Contreras said.

Contreras said he relies on medical marijuana to treat his post-traumatic stress disorder. The disorder affects 11 to 30 percent of veterans, according to the U.S. Department of Veterans Affairs.

“It’s been very helpful for patients, especially going through chemotherapy or (those who) have had a traumatic event in their life, that it’s now an option for them,” Berman said.

“I really don’t hide it from my son at all,” he said. “If he asks questions, I tell him exactly what it is. Once he gets older, if he’s of age, he can do it.”

Power said she talks to moms – both clients and those in her social circle – to help eliminate the stigma surrounding cannabis.

“They have pain, and they haven’t been functioning, or they want to relax at night and breathe, or they want that energy kick,” Power said. “People use it for so many different things, and it’s been amazing.”

Both Power and Berman are moms themselves and said it’s time to get rid of the bad reputation that follows marijuana.