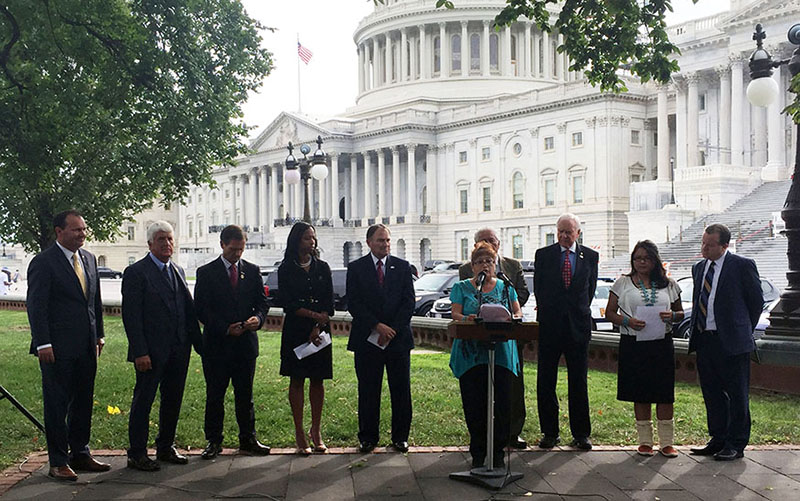 Susie Philemon, at podium, joined fellow Navajos and state and federal Utah lawmakers who said the decision on Bears Ears should be left to local officials. (Photo by Adam DeRose/Cronkite News)

WASHINGTON – Navajo Nation locals joined Utah lawmakers Wednesday to express opposition to any attempt to designate land around the Bears Ears site in southeastern Utah as a national monument.

The Navajo residents of San Juan County, Utah, joined their elected officials who said the decision on the 1.9-million acre site, which is sacred to the Navajo people, should be left in local hands.

“We have managed to protect this enchanted place, and we will continue to do so,” Susie Philemon said.

“Please do not take this land from us. Please,” she said, holding back tears, “don’t break more promises. Not again.”

The Navajo government in Window Rock has joined other tribes in the region who are calling on President Barack Obama to use his authority under the Antiquities Act to declare Bears Ears a national monument.

The site is home to the birthplace of historic Navajo leader Chief Manuelito as well as the ancestral burial grounds for many of Navajo living outside area after forced relocation in the 1800s.

Jackson Brossy, who directs the Navajo Nation Washington Office, echoed its cultural and spiritual significance of the site.

“The good thing about this is folks from all sides of the issue recognize that this is a sacred place to Navajo people, and it should be protected and preserved as such,” Brossy said. “The only issue is how we go about that. We’re all looking for the same end, but the means to that end is a little bit different.”

Utah officials and the Navajo who spoke Wednesday support a plan spearheaded by Rep. Rob Bishop, R-Utah and chairman of the House Natural Resources Committee. The Utah Public Lands Initiative calls for land-use designations across 18 million acres in eastern Utah by a “locally-driven process,” that includes the tribal stakeholders.

“What we have in the Public Lands Initiative was designed by these people, was designed to meet their wants, their needs, their desires, and it can actually be guaranteed to them because we are putting it in statue,” Bishop said.

The initiative’s backers believe that legislation, not the stroke of the president’s pen, can best assure that the tribe continues to have a seat at the table when it comes to protecting the area. Bishop claimed the federal government does not have the legal authority to deliver on an administration promise to co-manage the site with Native Americans, but Congress does.

Bishop said he plans to bring the bill up for a committee vote Thursday and take it to the House floor during the lame duck session after elections.

At a hearing Tuesday, Rep. Raul Grijalva, D-Tucson, called the bill a non-starter.

Grijalva, the committee’s ranking Democrat, said though the initiative brought together more than 100 stakeholders, it “leaves many of the stakeholders, including the region’s Native American communities no choice but to oppose the legislation.”

The locals who spoke Wednesday disagreed, fearing restrictions to their way of life if the site is named a national monument.

Lewis Singer, a Navajo from San Juan County, said monument status would restrict access of Native people to gather firewood and hunt game critical for their survival. He prefers another option.

“I think that there is still concern with PLI (the Public Lands Initiative), but that would be probably a better solution than going with the designation,” he said. “We could probably work things out if those issues that were a concern were remedied.”