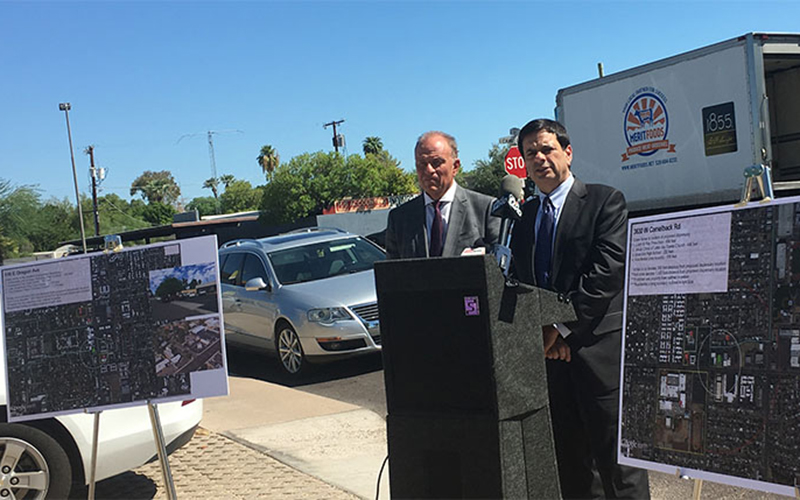 “This is not hypothetical,” said former Phoenix Mayor Phil Gordon at a news conference. “Variances have already been granted throughout the state on licenses that were awarded that were too close to neighborhoods, places of worship and schools.”

More than 700 applications for medical-marijuana dispensary licenses have been filed, according to azcentral.com. In October, only 31 of those will be awarded a license to sell.

The Arizona Department of Health Services enforces zoning regulations that prevent dispensaries from opening near schools or places of worship. But Gordon, former Arizona Attorney General Grant Woods and others said Monday the variances are loopholes in the law.

“I’m not against the dispensary per se, but I believe there need to be restrictions as to where they can be located,” Susan Groff, a Phoenix resident, said after the news conference. “We need to consider the compatibility with the neighborhood, if schools are adjacent.”

But a former DHS director said it’s unlikely that the department would grant licenses to dispensaries if the locations don’t fall within the zoning laws. Dispensaries have to 500 feet away from residential areas and no more than one-quarter of a mile from schools and places of worship.

Will Humble was DHS director in November 2010, when voters approved the Medical Marijuana Act. He helped draw up the licensing requirements for dispensaries, including making sure zoning approval was needed before licenses can even be granted.

“To get a full license, there’s a two-step process,” said Humble. “Number one, you get a registration certificate which gives you a year’s time to get all your zoning documentation in order. At the end of the final inspection, you have a license and can sell.”

“There’s no real way to avoid final zoning,” said Humble, who works at the University of Arizona health sciences department.