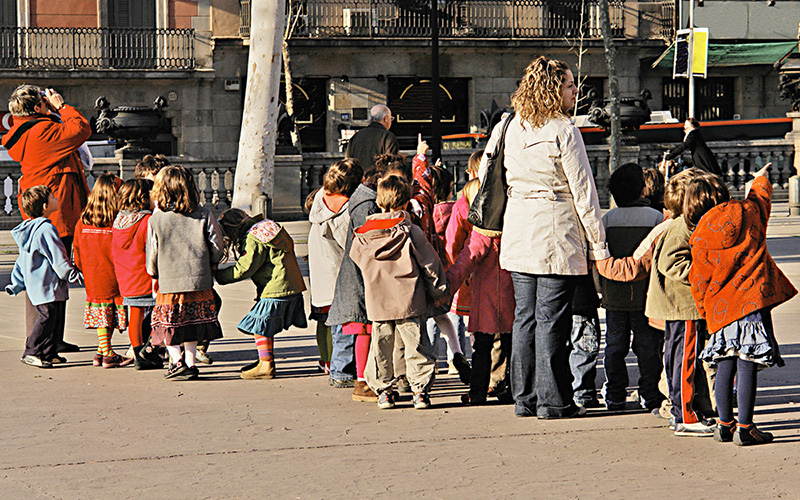 Average childcare pay in Arizona and most other states falls below the poverty line for a family of three, according to a government report, that said pay in all states would make workers food-stamp eligible. (Photo by njxw/Creative Commons)

WASHINGTON – Arizona childcare workers were paid less, on average, than parking lot attendants, manicurists and pedicurists in 2015, part of a national trend that saw workers in all states earning salaries that could qualify them for food stamps.

And Arizona’s median salary of $20,070 last year for childcare workers was not even the worst in the nation – in fact, it ranked ahead of 30 other states and Puerto Rico, according to the recent report by the U.S. departments of Education and Health and Human Services that provided the numbers.

The report looked at salaries of childcare workers, Head Start and preschool teachers, preschool special education teachers, kindergarten and other elementary school teachers and found them all lacking. That hinders the ability to attract educators to help children during the years that “have the greatest potential for setting a foundation for lifelong learning and health,” the report said.

The message of the June report was summed up in its title: High-Quality Early Learning Settings Depend on a High-Quality Workforce; Low Compensation Undermines Quality.

That position was echoed by advocates in Arizona.

“If we’re talking about people working in daycare and Head Start, they’re dealing with youth in a critical stage in their development,” said Kelly McGowan, the deputy director of the Arizona Community Action Association. “It’s a critical position.”

The lowest of the salaries in the report went to childcare workers. In Arizona, the $20,070 median salary compared to a median income of $21,800 for parking lot attendants in the state and $22,220 for manicurists, according to the report.

Puerto Rico childcare workers were paid the least in the report, with a median salary of $17,650, while New York was highest at $25,450.

But even workers in the best-paying states would qualify for Supplemental Nutrition Assistance – food stamps – which has a threshold of $26,124 for a family of three, according to the report. Arizona was one of 31 states, along with Puerto Rico, where wages were below the poverty line for a family of three.

“There are a lot of problems with the childcare industry in Arizona as far as the funding and wages,” said Erin Raden, the executive director of the Arizona Childcare Association. “Lower wages are a result of the bigger systematic problem.”

Raden pointed to 2009 state funding cuts to the childcare assistance program that she said have not been restored. The low wages hit women particularly hard, as they account for 97 percent of childcare workers, the report said.

Raden said “we are making progress in the mentality, however the money has not followed yet in Arizona.” Improvements in education funding in the state have not gone to salaries, she said.

Preschool is especially important to many because it’s the age at which children are most vulnerable and impressionable. The report said that not only is early development critical but it is cumulative, with later education building on that early foundation.

“If we can have high-quality early education teachers that we can retain with higher wages, we can have better-prepared children,” said Jonathon Gonzales, the executive director of the Arizona Head Start Association.

Despite the low wages, the credentials needed to work in early childhood education continue to rise, advocates said, and salaries may not rise or may rise only slightly with a degree.

“It’s difficult because to an extent the more education you receive, you’ll only see slight wage increases,” said Raden. She added that even though “there is work being done, our challenge is finding those to support this work.”