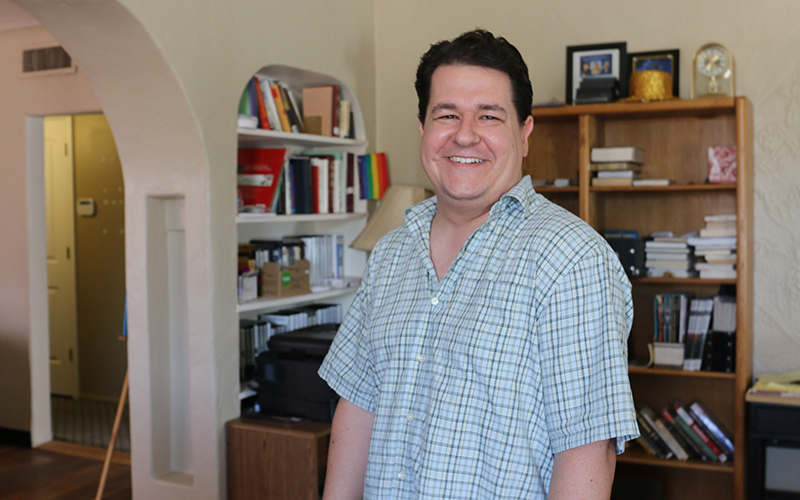 Chris Wojno is the vice president of the Humanist Society of Greater Phoenix. (Photo by Anna Copper/Cronkite News)

Wojno, now 31, was 25 when he realized he could no longer profess a belief in God.

A self-described “lazy Roman Catholic,” he decided to start going to Mass again when he was in his mid-twenties. However, his attempted return to the faith brought up a period of questioning and reevaluating of his own beliefs.

Despite the tension it creates among his family, he now describes himself as an “atheist-agnostic.” And he is far from alone.

According to a survey by the Pew Research Center in 2014, 23 percent of U.S adults describe themselves as atheists, agnostics or say their religion is “nothing in particular.” This is up 7 percentage points from 2007, when 16 percent of Americans counted themselves among the unaffiliated. In Arizona, the share is slightly higher: 27 percent are unaffiliated, which is up from 22 percent in 2007.

There is a generational divide, too.

Linell Cady, director of the Center for the Study of Religion and Conflict at Arizona State University and professor of religious studies, said, “When the younger generation is showing that kind of a trend over seven or 10 years, it really appears to be something that is going to just grow larger and larger.”

Cady identified several reasons why this could be happening. First, she said there is a growing “individualistic orientation” in the United States.

“Americans are increasingly not becoming involved in civic organizations in the way that they had been,” she said. “So if you think about it that way, religion is one more arena where people are less inclined to be joiners.”

In fact, the nature of civic engagement may be transforming. A 2013 study by Pew found that, in 2008, three percent of U.S. adults said they started or joined a group on social media that organized around political issues. By 2012, that number had risen to 12 percent.

Of the 22 Arizonans who responded to a Public Insight Network query about being religiously unaffiliated, six said they had a community that acted as a replacement for religion in their lives.

While it is true that voter turnout was on a downturn for most of the 1970s, 1980s and 1990s, recent elections have seen a slight reversal in that trend.

What may better account for the trend away from religion among younger generations are their opinions of religious institutions.

Cady pointed to the role that religion plays in politics. While it’s unclear if specific political stances commonly adopted by religious groups directly contribute to the rise of the “nones,” it is clear many younger Americans do not have a favorable view of religious organizations overall.

The percentage of millennials who say churches and religious institutions have a positive effect on the direction the U.S. is headed dipped from 73 percent to 55 percent between 2010 and 2015. Among older generations, opinions have increased slightly, but overall trust in religious institutions has gradually been declining over the past four decades in the U.S. population overall. According to a Gallup poll, 41 percent of Americans said they have a great deal or quite a lot of confidence in organized religion.

Cady also said that the “democratization of morality” further contributed to the trend away from organized religion.

The majority of respondents in Pew’s Religious Landscape study said that common sense — not religion — was their source for guidance on right and wrong.

The Humanist Society of Greater Phoenix is headquartered in Mesa in a white-washed stucco house with a tile roof. Most of the space is devoted to a large multipurpose room where the group holds its twice-monthly gatherings, but there is also a kitchen, rec room for children and a library.

Bookshelves take up nearly every square inch of wall space in the library. Wojno said it is not uncommon to find one of the members taking a nap on one of the couches.

“We’ve got — let’s see,” Wojno said as he reached for books near the top of one bookcase. “The Quran, the Rigveda, Confucianism, Christianity, Judaism, various mythologies. We encourage people to pretty much research as much as possible. The more information they have the better. The more exposure they have to concepts the better.”

Access to that kind of information influenced Wojno’s “de-conversion.”

But not every experience is so foundation shaking. Justin Zimmer, another member of the HSGP, grew up “technically” Christian but gradually drifted away from organized religion. 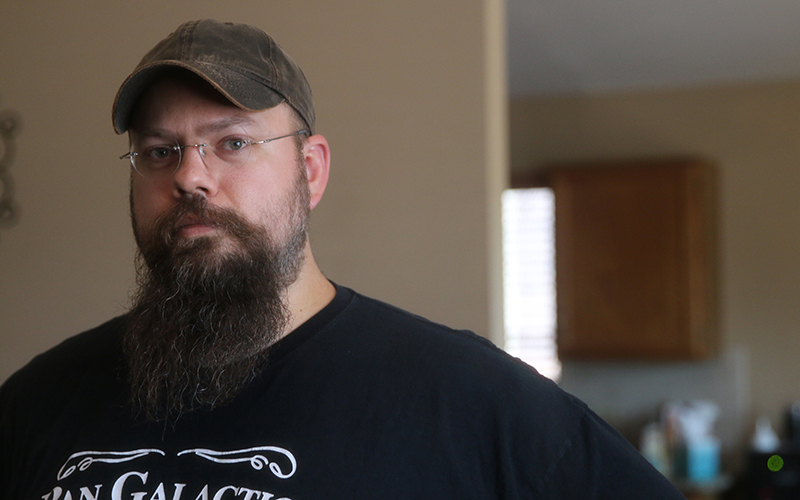 Justin Zimmer, a member of the Humanist Society of Greater Phoenix and a freethinker. (Photo by Anna Copper/Cronite News)

He now considers himself a skeptic and nonbeliever, and he found the society through its Facebook group. But he and his family weren’t initially looking for a community. They were, however, looking for something their daughters could do.

“What officially got me in there is they were starting a Girl Scout troop,” he said.

He liked the fact that the troop had very little ceremony. As an added bonus, he was introduced to like-minded parents.

“God was an assumption, but it was something we were allowed to explore.”
– Justin Zimmer

Despite being a part of this community, non-belief isn’t a core part of his identity or his family’s identity. Religion isn’t a topic that comes up much at home. Instead, he’s more interested in giving his children the opportunity to choose what they want to — or don’t want to — believe.

“If I am going to try to raise them in anything, it’s to not only be slightly skeptical so that they don’t end up stuck in bad ideas, but also to be curious,” Zimmer said.

While skeptics, doubters and freethinkers are a core part of the HSGP, the majority of religiously unaffiliated people don’t identify as atheist or agnostic. In Arizona, they make up a quarter of the “nones,” with the rest defining their religion as “nothing in particular.”

And even though they don’t identify closely with any one faith, 35 percent of “nones” in Arizona say that religion is very or somewhat important to them, and 88 percent of them say they believe in a god to some degree.

Debra Nolen, 62, counts herself as a believer. 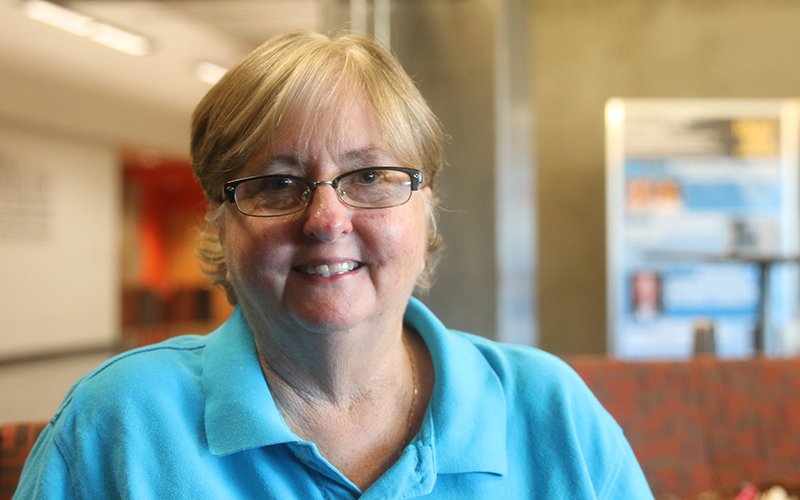 Debra Nolen, a former Catholic, still believes in God and reads the Bible, but no longer goes to Mass. (Photo by Anna Copper/Cronkite News)

She grew up Catholic, though no longer attends church. Like many other Catholics she knows, as soon as she didn’t have to go to mass anymore, she stopped going.

“I hesitate to label myself as a Christian, but I do believe in God,” she said. “I believe if you’re a Christian then that means that you belong to the community of faith. And for me, being a religious studies major and knowing how church works? It turned me off to actually going.”

When she was in her twenties, she and her best friend developed a renewed interest in Catholicism. Together, they attended Mass at several different churches. But the more they went, the more Nolen became exposed to church politics.

“You’re only as good as the minister telling those stories back to you. You can have five friends all go to a different church and come back with a different perspective on the same stuff. To me, that’s kind of problematic,” she said.

Still, Nolen never stopped reading the Bible. She said she continues to find comfort in the stories within its pages and finds faith “amazing.”

It’s the kind of approach to religion that Linell Cady said she sees becoming more common.

“I do think religiosity is changing forms,” Cady said. “A lot of these ‘nones’ are not atheists, but they actually have a kind of a sense of a higher power, a sense of a divine spirit. It’s not necessarily anti-religion, but it’s becoming a more personally tailored form of religiosity.”

These trends might not signal the end of religion as we know it in America, but it might be the beginning of a new kind of spiritual life.

“I learned early on,” Nolen said, “from a priest no less, that church does not necessarily have to be the building.”