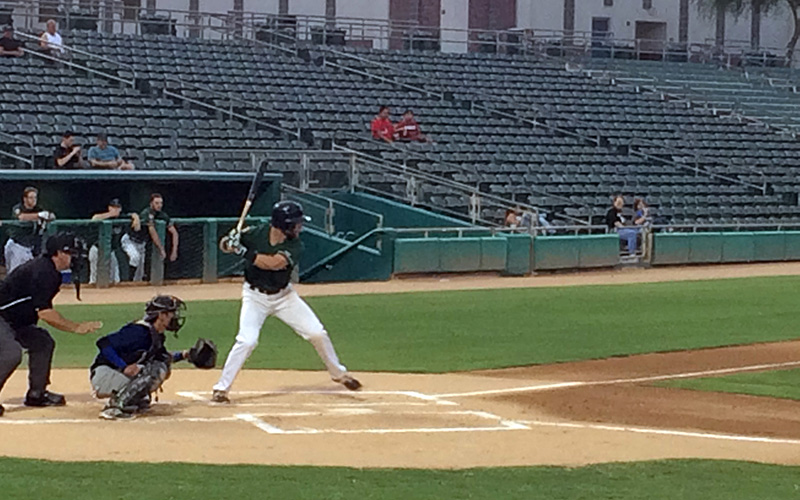 “There’s a baseball team in Tucson?”

However, being in the league’s largest market and leading the league with a 51-14 record don’t seem to be enough to bring in the crowds.

“Tonight, I doubt if we’ll have 1,000,” said Saguaros manager JD Droddy before the team’s July 21st matchup against the Salina Stockade.

This wouldn’t be a problem at most other Pecos League ballparks, where capacities range from a couple hundred up to 1,400 at Kokernot Field where the Alpine Cowboys play. However, the Saguaros play in Kino Veterans Memorial Stadium, which has an estimated capacity of 11,500.

But it’s not just the Saguaros that are having trouble filling it. Droddy mentioned previous teams that played there found the same issue.

“I don’t think the Padres drew very well here either, which is why they left,” Droddy said.

Droddy was referring to the Tucson Padres, a former minor league baseball team and Triple-A affiliate to the San Diego Padres from 2011 until they moved to El Paso in 2013.

Pecos League commissioner Andrew Dunn said the fallout from the Padres exit has also hurt the Saguaros’ ability to get local support.

“We’re coming behind the Padres leaving and a real negative situation we walked into,” Dunn said. “We needed to get through this season before we could have people that are willing to support and wanting to have big nights to get people out.”

Where are the fans?

Tucson resident Dave Bushway, who has attended a few of the Saguaros games this season, said he used to come to Padres games and games of the Sidewinders, another former minor league team and Triple-A affiliate to the Arizona Diamondbacks from 1998 until 2008, when they moved to Reno.

Though Bushway was willing to come out and watch any team playing baseball in Tucson, general fan support has always seemed to be an issue.

“The Triple-A team used to draw better than this, but not a lot,” Bushway said. “They’d draw a couple thousand.”

“Nobody knows about it,” Bushway said. “There’s no advertisement, there’s very little said about it, the news doesn’t cover it.”

“Our biggest problem is getting publicity,” Droddy said. “We don’t have a big budget for marketing.”

The Saguaros proved they could get out a crowd for their July 4th game, where the team reported an attendance of 8,720. It’s these kind of promotional nights that can build interest and grab people’s attention.

“That’s what it takes. Fireworks. Fourth of July,” Dunn said. “You have to build theme nights and you have to do group nights.”

Dunn said the community is starting to warm up to the team as the Saguaros have been dominating the competition.

“No one wanted anything to do with us,” Dunn said. “Now that’s not the case because they like what we’ve done. They like the consistency that we’ve done, and the level of play has been great.”

Droddy, who has managed in the Pecos League before with the Trinidad Triggers in 2013 and 2014, had a simple method for building a successful team.

“You do that by going out and finding the very best players available,” Droddy said.

But it’s not that simple. As a low level independent league, it can be very hard to get high-quality players to join up. Droddy says he needs to start the process of putting together his team months in advance.

“I start usually in October building my next year’s team,” Droddy said. “The teams that are successful do that. The teams in our league that are perennially not successful, they don’t do that.”

But even then, competing for players with Major League Baseball and its minor league system means that Droddy will lose out on a lot of them.

“You’re turned down by five or six or eight guys for every one that you sign, if you go after the right people. I could fill the roster tomorrow, but not with who we want,” Droddy said. “Guys say, ‘OK, the Angels or the Rays or somebody is supposed to make a decision tomorrow. If they don’t sign me, I’ll come with you.’ And we’ve lost them to them, because that’s the kind of guys we go after.”

For outfielder Adam Urbania and second baseman Michael Rampone, this was just the opportunity they were looking for to keep their dream of playing baseball alive. Both were out of school and working when they were contacted by the team to tryout.

“There was always lingering questions in the back of my head like, ‘Can I still do it?’ and ‘Should I give it one more chance?’” Urbania said. “I decided that I didn’t want to be 60 years old and say I didn’t give it one last shot.”

“I just wanted to play baseball,” Rampone said. “I knew I was young and didn’t want to regret not playing, so this was the opportunity given and I’m happy to take it.”

Rampone said that although he’s enjoyed his time with the team, he hopes this can be a springboard to bigger things.

Though the players may not stay, one thing that Urbania said he does want is that “baseball sticks around in Tucson. We don’t want to be coming here for one year and then maybe the team relocates.”

Dunn said that Tucson isn’t a make or break city for the league. All the teams are equal in the league, so if baseball doesn’t work out there, the league will continue.

“We’d be fine without it as we’ve been for the first seven years, but while it’s available and while we’re welcome, we’re glad to be here,” Dunn said. “It’s one of those things, no one team is bigger than what we’re doing as a league.”

Whether they play to crowds of fans or empty seats, the Saguaros focus now is on continuing their success through the playoffs and winning the league championship. Urbania invoked what he said was a team motto that showed how championship aspirations have become the only thing that matters to the team.

“It don’t mean a thing if you ain’t got a ring,” Urbania said.