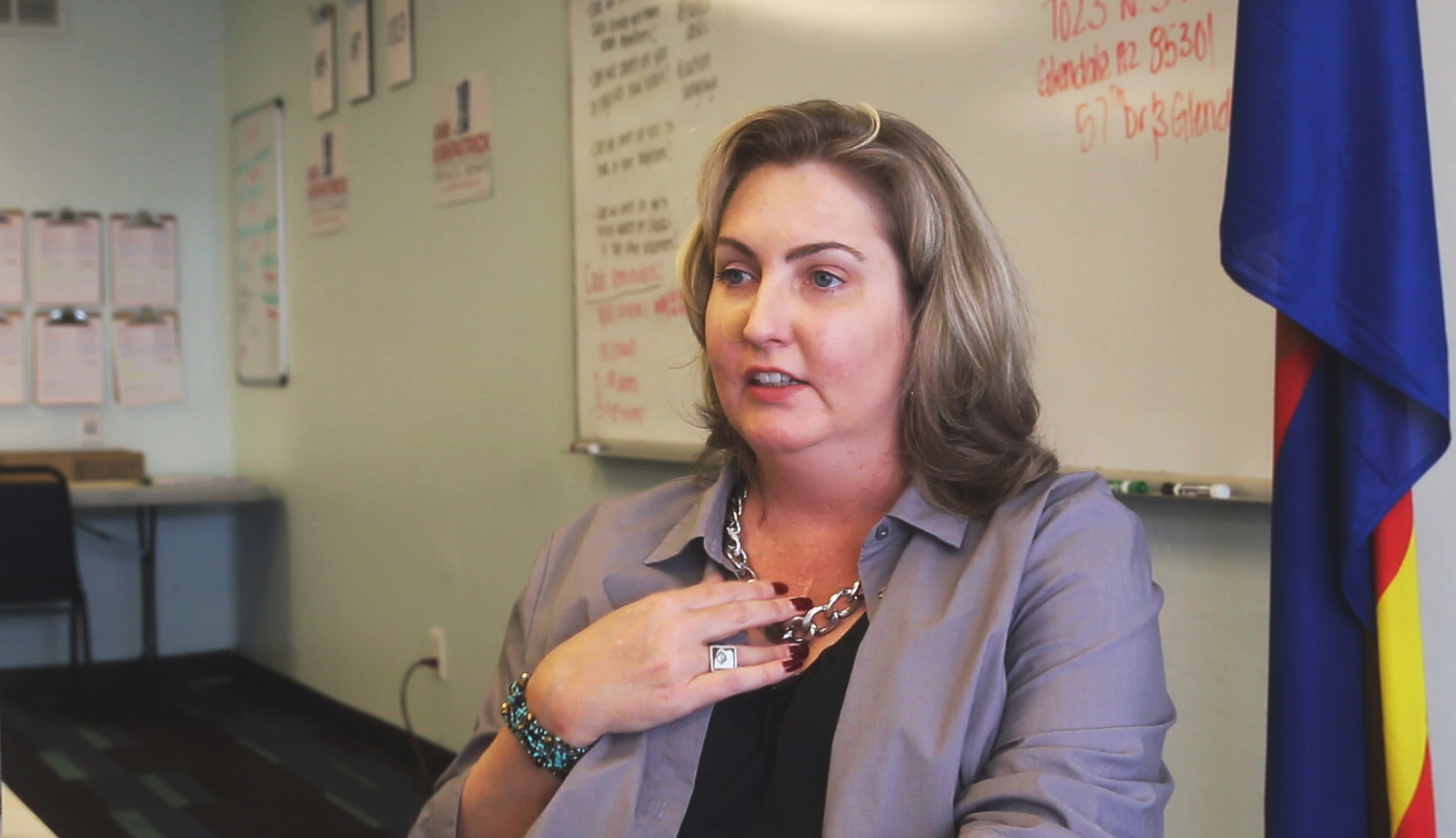 Jeanne Lunn holds her hand over the scar from a heart transplant. She says her medical experience has inspired her to become an Arizona Democratic delegate. (Photo by Kelsey DeGideo/Cronkite News)

PHOENIX- At the age of 37, Jeanne Lunn was getting ready to leave town on a work trip when she started feeling chest pain.

At first she thought it was indigestion, but by the end of the night she was in the operating room with heart failure.

“I was living in a dream world, that nothing like this could ever happen to me,” Lunn said.

Now, three years later, Lunn sits in the Arizona Democratic Party’s downtown Phoenix office, where she volunteers. She lifts her silver chain-link necklace to show a raised, rose-colored scar in the middle of chest running the length of her torso. The scar reminds Lunn of the moments when she was fighting for her life through numerous surgeries and, ultimately, a heart transplant.

Those memories and the lasting financial impact of her experience are what inspired her to make the trip to the Democratic National Convention in Philadelphia to support presumptive presidential nominee Hillary Clinton.

“There are a lot of Americans like me, who are back in the day of having to decide which credit card to put our medicine on or which month of medication I can skip,” Lunn said.

She later added, “I have faith that she’s the one who can make my life better.”

Lunn is one of 12 Arizona delegates with a disability under the Democratic “affirmative action” plan, which is designed to make sure the Democratic delegation reflects the demographics of each state.

The party uses U.S. Census numbers, voting records and other survey data to create targets for proportions of the delegation for racial, ethnic, age, sexual orientation and disability groups. The American Community Survey helps determine how many representatives should be people with disabilities.

Arizona Democratic Party’s political director Barbara Lubin said disability is a self-defined section on the delegate application, and there is opportunity for people to expand on their personal experiences within speeches.

“There were so many wonderful people who wanted to be a Hillary delegate,” Lunn said.

Lunn has been politically involved since she was a child. She was a poll watcher before she could even vote.

“I’d be 6 feet tall today if I didn’t start going to coffees and political events as a child, where I’d have coffee every morning,” Lund said.

At 11 years old, she handed out voter registration pamphlets street-side at campaign headquarters in Chicago.

“I always knew politics affected me,” Lunn said. She recalled being interested in who picked up her garbage and which councilperson to call if the garbage collectors did not show up.

She spoke proudly of her mother rallying for petition signatures for former Arizona Gov. Janet Napolitano, despite being hospitalized and dying soon after.

Lunn said her party needs to come together now, electing a Democratic Senate majority and rallying behind Clinton.

“I want people to wake up to the fact that it really matters.” Lunn said. “Their votes matter.”

Lunn is hopeful that the DNC will bring strong health care initiatives. She believes Clinton is the person who can negotiate with pharmaceutical companies, for instance, for more affordable medication.

“For a lot of people, this is a life or death election. For me, it’s my health care,” Lunn said. “For others, it may be their marriage being overturned. For adoptions, it will affect who can adopt – we have 15,000 kids in foster care in Arizona alone, how’s that going to affect them?”