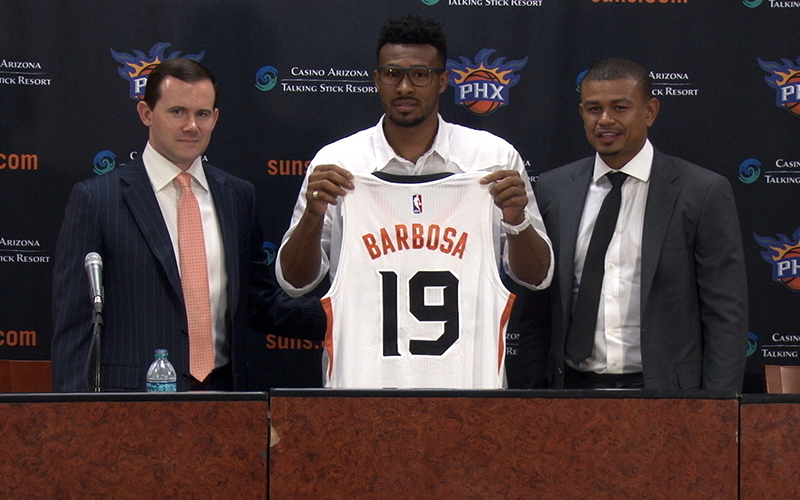 Phoenix coach Earl Watson was impressed with Barbosa’s performance during the Warriors’ historic 73-9 regular season and said he is a perfect fit for the Suns as a mentor and player.

“We talk about bringing in champions. He understands what it takes,” Watson said. “There are going to be parts in the season where our younger group is going to have questions. He has that voice in the locker room. He’s great at everything he brings to the game.”

Barbosa won an NBA Championship with Golden State in 2015 and said he is ready to share that culture with the Suns’ young core, featuring Dragan Bender, Devin Booker, Tyler Ulis and Marquese Chriss.

“During the 13 years that I’ve played, I’ve been with a lot of great players. I want to teach them, especially Booker,” Barbosa said. “He’s young, talented and can really shoot the ball. I was with Stephen Curry and Klay Thompson for two years. Those two guys are a crazy weapon. That’s similar with Booker. He’s going to be a main guy for us.

“It’s a totally different team and group. One thing that I really want to bring to this team is to be together. The group we had over in Golden State was unbelievable. Everyone was doing stuff together. I think it starts from there. As soon as we start doing that, everything will go with the flow.”

The “Brazilian Blur” began his NBA career with Phoenix and averaged his career-highs with 18.1 points and 4.0 assists. After sacrificing minutes in Golden State, Barbosa averaged 6.8 points and 1.2 assists while the team won two conference titles and the NBA Championship.

The Suns look forward not only to Barbosa’s basketball abilities, but also to his character. Watson remembers the way in which Barbosa plays.

“We faced each other for 11 years as competitors,” Watson said. “When you face each other in the NBA, you have players that if you collide you don’t really care and help them up. There are few players that I respect and he’s one of them. On hard fouls, we’d always make sure we were both OK.”

After bringing in two first round picks in the 2016 NBA Draft, Suns General Manager Ryan McDonough wants a mix of young talent and veteran leadership.

“LB is very popular with teammates and fans and we are thrilled to have him back as a key part of the Suns,” McDonough said. “We think he will contribute greatly to what we are building, on and off of the court, here in Phoenix.”

Barbosa plans to play for the Brazilian national team this summer during the 2016 Olympic Games.