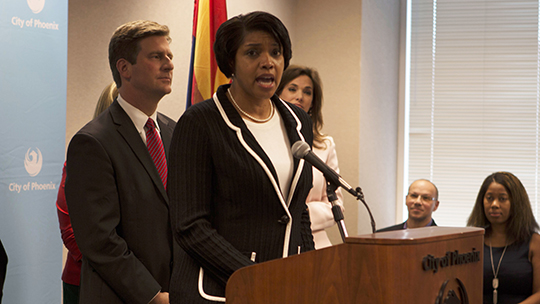 New Phoenix Police Chief speaks about her selection at a press conference at city hall with Mayor Greg Stanton behind her. (Photo by John Alvarado/Cronkite News)

PHOENIX – Growing up in Phoenix, Alan Williams had dreams of playing in the NBA while his mom, Jeri, worked as an officer with the Phoenix Police Department, cared for her family and studied for her master’s from Northern Arizona University.

She said it took a group effort in her family to make both of their dreams happen.

“We are an amazingly, resilient family who is willing to do anything possible to help the other succeed,” Jeri Williams said. “If it means cooking and delivering food to a son that wants to realize his dream to helping my artistic kid do something different, to wanting to become a police chief, I’m blessed and fortunate to have that type of family.”

Now, both have been able to achieve their goals – and in their hometown. In March, Alan joined the Phoenix Suns on a 10-day deal and after one game with the team, was later signed to a two-year deal.

On Thursday, Jeri was formally announced as the chief of the Phoenix Police Department, replacing retiring Chief Joseph Yahner.

When the new chief called her son to share the news that she was coming home from Oxnard, Calif., Alan said he could not contain his excitement.

“She called me and I just started yelling because it is the news that we’ve been waiting for so long,” the center said in a video released by the team. “To finally hear it and for it to finally come true, it is an extreme blessing.”

This is something that Jeri has been working for in her 28 years of law enforcement that started with the Phoenix Police Department. After 22 years with Phoenix, she left in 2011 to become the chief of the Oxnard Police Department.

Alan’s dream first started when he was playing basketball at North High School. After finishing high school, he played four years at UC Santa Barbara where he averaged 15.5 points and was named the 2014 Big West Player of the Year . After his college career, he went undrafted in the 2015 NBA Draft and played Summer League for the Charlotte Hornets and Houston Rockets. After the conclusion of the 2015 Summer League, he signed with the Qingdao DoubleStar Eagles of the Chinese Basketball League.

Alan said it was his and his mother’s goal to find a way to return to Phoenix.

“We’ve both taken the steps to make our dreams come true and her’s is now here,” Alan said. “Her opportunity is here and I‘m still here working and grinding to get where she is at.”

In four games with the Suns Summer League team in Las Vegas, Alan is averaging 13 points and 11.25 rebounds per game.

And, of course, the new police chief is proud of her son.

“It is every parent’s dream to want the ultimate dream of your child,” Jeri said. “Alan, being in the NBA, playing for his hometown team with an amazing coaching staff and teammates on the Suns, is definitely a dream come true.”