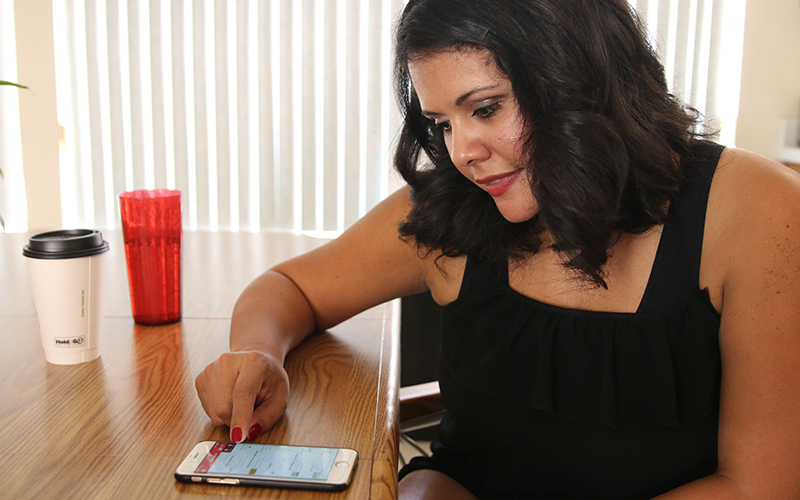 GrubHub is just one of the food delivery services that Stefanie Contreras uses. (Photo By Socorro Carrillo/Cronkite News)

“Most of the time I’m so focused on having fun. The convenience of the apps can help me do that,” Contreras said. “I don’t have to worry about those things because they take care of themselves, almost. I can focus on the things I actually want to be paying attention to.”

Contreras is diving deep into the digital economy, joining the 72 percent of Americans who have used some type of on-demand or sharing service, according to the Pew Research Center. On-demand services like Uber and GrubHub deliver a driver, food or other goods and services quickly to a doorstep while sharing services like Airbnb and PivotDesk mean people can swap homes, cars, office space and other needs or luxuries.

Arizona leaders are trying to latch onto the trend and into the stream of cash it carries with it, more than $4 billion annually in the U.S, based on 2014 numbers. (The future is coming and it’s being delivered by a smiling worker from the Postmates errand-running service.) Gov. Doug Ducey, in his state address, said he wants to make the sharing economy to Arizona what Texas is to oil.

In January, Ducey established the Governor’s Council of the Sharing Economy and has pushed legislation that allows for more crowdfunding, legitimizes home-sharing services, and Uber and Lyft are now available at Phoenix Sky Harbor Airport. The moves are meant to add Arizona to a soon-to-be $335 billion global behemoth.

“What do you mean they don’t have Uber in Costa Rica?!”

Contreras demands services or products that arrive nearly as fast as the speed of her thoughts – sometimes within the hour, no longer than two days – after she swipes the screen of her iPhone.

“I’ve started to integrate these different apps into everything that I do. It becomes a way of life,” said Contreras, who works in marketing. “It’s almost like a task that doesn’t require any thought anymore. It’s muscle memory.”

She’s running out of toilet paper, laundry soap and other household needs? Touch the Amazon Dash buttons around her Gilbert home. Tide is on the way.

She’s laughing, talking, eating and having a drink or two with friends. Then, she taps her screen twice to call up an Uber or Lyft driver.

Roll over or tap the dots to learn more.

When Contreras’s car needed repairs, she swiped through the 50 or so apps on her phone and found the stormy teal Uber logo to make sure she made it to work on time. The home sharing service Airbnb has become her “hotel” of choice when she travels abroad.

No surprises await Contreras as she moves through her day. If she needs parking in a busy area she can use ParkWhiz to find parking and reserve it. If she wants to catch a movie, she can order tickets through Fandango and have them waiting on her iPhone, ready to scan so she moves quickly past the velvet ropes of her local theater.

Everyday entertainment can be grabbed in an instant. Contreras, a self-described geek, uses on-demand services to download comics.

Contreras doesn’t cook often. She prefers to order food online from services like GrubHub, Seamless or Doorstop, which allow her to peruse local restaurants and order almost any meal with a 30-minute or less wait time. 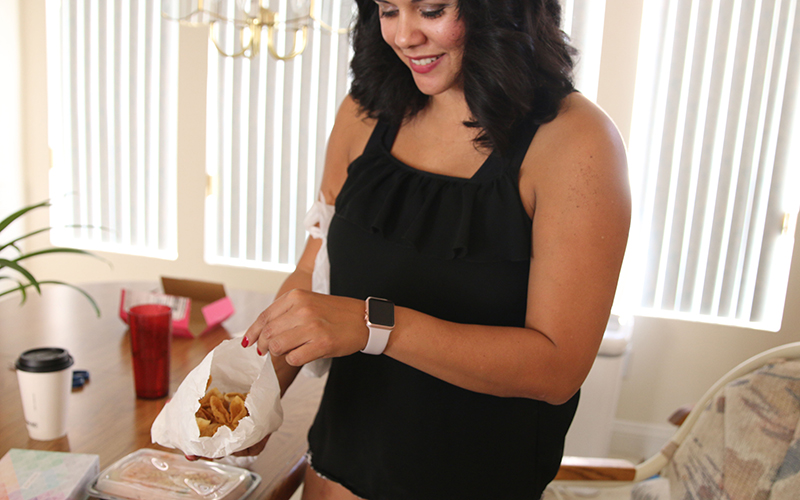 Stefanie Contreras digs in to pad thai and rangoons. She often uses GrubHub to get a meal and rarely cooks. (Photo By Socorro Carrillo/Cronkite News)

Contreras’ dependence on on-demand services isn’t cheap. The idea of adding up how much she spends a month makes her wince.

Delivery charges alone can reach $5 or more. Short Uber rides can cost more than $15 during “surge” hours. A Prime membership (which covers faster shipping than usual) costs $99 annually, without the item price tag.

She reluctantly estimates she pays $300 to $500 every month, not counting buying clothes off Etsy. She doesn’t pay rent, so housing is not an expense.

Contreras said it’s a reality of the on-demand/sharing lifestyle. Convenience is king in this new world and, as with any ruler, you have to pay up.

“Sometimes you have to be willing to pay for convenience. You know there will be extra fees involved,” Contreras said. “If it’s worth it, then go for it.”

The Pew Research Center estimates that four out of 10 on-demand consumers earn $100,000 or more annually and typically are young urbanites influenced by online interactions.

Sociologists criticize on-demand services, saying they rely on affluent consumers and create a group of “have-nots” in the digital economy. Researchers like Loren Terveen, believe that the expense and air of exclusivity leaves the poor behind. Even ride-hailing users say so – Pew said 43 percent of ride-hailing users agree services like Uber are a luxury.

Others question whether some services are safe, including whether Uber runs sufficient background checks for drivers. Pew research shows 5 percent feel unsafe with ride sharing. About 12 percent of home-sharing users reported having a bad experience.

Contreras said she wants to see more services become on-demand, like gas and money. (Apps to fill up your car are available in certain areas of the country.)

“I would love it if someone could figure out a way to get me cash on demand,” Contreras says in a statement. “I never go to the bank unless I need to stop at an ATM, and not every salesman accepts Apple Pay, so this is an on-demand service that I would love to have figured out, please!”